When doing the right thing makes you a criminal 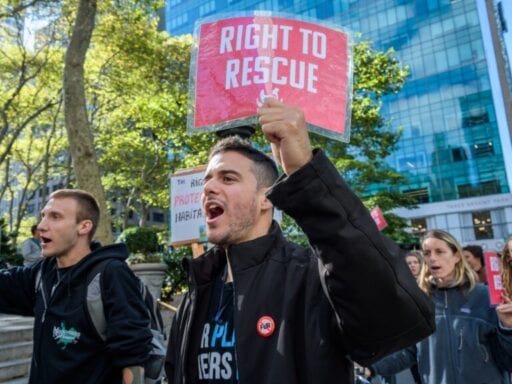 For most of his life, Wayne Hsiung was a typical overachiever. He attended the University of Chicago, started his PhD in Economics, became a law professor at Northwestern, and was mentored by Cass Sunstein. But then, something snapped. In the midst of a deep, overwhelming depression, Hsiung visited a slaughterhouse and was radicalized by the immense suffering he saw. Now, as the co-founder of Direct Action Everywhere, he faces decades in prison for rescuing sick, injured animals from slaughterhouses.

Open rescue missions are so powerful because they are sacrificial. They are meant to demonstrate the injustice of a system that would lock up those who are doing what any child would recognize as the right thing to do. So, while Hsiung faces up to 60 years in prison for his participation in those missions, he is anything but regretful.

The thing that makes me comfortable with it is that I personally feel it’s worth it, even if it hurts a lot. It’s worth it because I feel even worse about what’s happened to the animals and even feel even better about the possible benefits that could come from this.

Think about gay rights. Until we got some really key legal cases, there was not a feeling among the populace at large that they could come out and support gay rights because it didn’t seem like it had institutional support. But as the courts in states like Hawaii and California — and eventually the Supreme Court — started acknowledging gay rights, this started to put a mainstream gloss on this once radical idea. [These cases] gave everyone who intuitively wondered why we mistreat gay people, but who didn’t act because of shame, permission to openly care about gay people.

There’s something about these formal institutions that we’ve all put our trust into — like our court system and our legislature — such that getting some of them to acknowledge the right to rescue animals in distress (and that the folks who are abusing the animals are the criminals) could possibly set off a cascade of people who feel that they can now say it too.

In our conversation on The Ezra Klein Show, I wanted to understand a simple question: How did he get here? What leads someone with a safe, comfortable life to risk everything for a cause? What does society look like to him, now, knowing what he faces? And the big question: Is Hsiung the weird one? Or is it all of us — who see so much suffering and injustice and simply go about our lives — who have lost our way?

“Who’s to say it won’t happen again?”: Democrats warn of the risks of acquittal
Nevada promises its caucuses will go better than Iowa’s
Most Americans believe Trump lied to them, but think impeachment is a bad idea
The coronavirus killed American exceptionalism
All 12 Thai boys and their coach have been rescued
Millions of Americans take vitamin D. Most should just stop.

Your Echo is now sharing your internet with your neighbors. Here’s how to opt out.