When New Hampshire polls close — and when we might get results 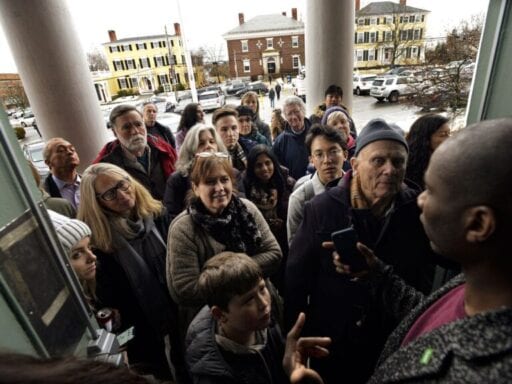 Polling places in the Granite State will close at either 7 or 8 pm ET on Tuesday.

The 2020 Democratic presidential race heads to New Hampshire on Tuesday for the state’s first-in-the-nation primary, where voters will decide among the 11 remaining Democratic candidates (minus former New York Mayor Mike Bloomberg, who’s not on the ballot in New Hampshire).

In most cases, the polls will open at either 7 or 8 am Eastern time and will close at 7 or 8 pm ET. New Hampshire elections are administered municipally, so polling times are set on a city-by-city basis.

Unlike in Iowa’s impossibly muddled caucus system, which caused so much difficulty last week, voters in New Hampshire will go to their polling places and cast ballots in a straightforward primary.

In 2016, the Associated Press called the race for Sen. Bernie Sanders at 8 pm ET after Sanders opened a commanding lead over the eventual Democratic nominee, former Secretary of State Hillary Clinton, with more than half of precincts reporting. A substantially larger and still-in-flux 2020 field could mean it will take longer for a clear winner to emerge this year, but it’s a safe bet that results will be reported far earlier than in Iowa.

Sanders, who represents neighboring Vermont in the Senate, currently leads the field by more than 6 points in the RealClearPolitics New Hampshire polling average. Former South Bend, Indiana, Mayor Pete Buttigieg — who won the most delegates in Iowa, though Sanders won the most votes and the AP has said it is unable to declare a winner — is running in second in New Hampshire, well clear of the rest of the field.

Behind Sanders and Buttigieg, the polling picture is less clear: New Hampshire polling averages from RealClearPolitics show Sen. Elizabeth Warren about a point ahead of her closest rivals — former Vice President Joe Biden and Sen. Amy Klobuchar, who are tied with 11.3 percent support — but nearly 10 points behind Buttigieg.

However, Klobuchar has registered strong performances in several recent polls: Over the weekend, she jumped to third in two different New Hampshire tracking polls, ahead of Warren and Biden, and she could be poised to turn in a surprisingly strong performance Tuesday.

An additional complicating factor is the sheer number of still-undecided voters; a recent Monmouth University poll found that 51 percent of voters were open to supporting a different candidate.

The New Hampshire Democratic primary also includes independent voters, another difference from last week’s contest in Iowa that has the potential to shake up the race.

Despite the uncertainty, New Hampshire could be a do-or-die moment for several candidates in the race. Vox’s Ella Nilsen writes that Warren, from neighboring Massachusetts, “needs a win or a strong second-place finish” in New Hampshire, and that Biden — for whom a devastating fifth-place finish is a real possibility, according to a recent Emerson poll — “can’t afford to come limping out of New Hampshire after suffering a self-described ‘gut punch’ in Iowa.”

In any case, New Hampshire will likely provide a major bounce — in polling, media coverage, and fundraising — for whichever candidate pulls out a win or overperforms in the “expectations game.” The race heads to Nevada and South Carolina next, the last two early states before Super Tuesday, and the tempo of the primary will only accelerate from there.