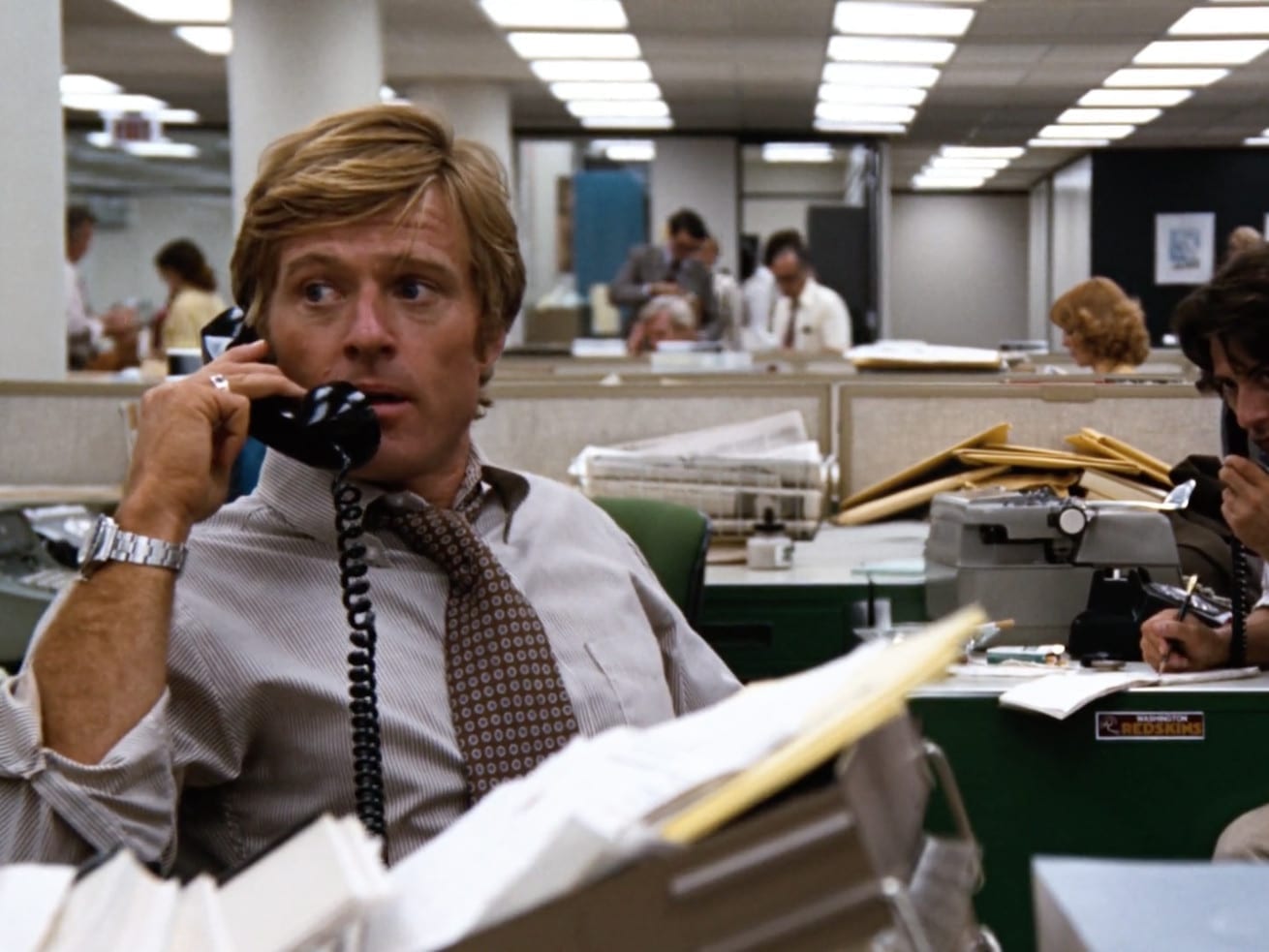 If, for some reason, you have Watergate on your mind.

On November 13, the House of Representatives moved its impeachment inquiry into President Donald Trump from closed-door meetings to public hearings — which means the American public can now watch what’s going on. If the proceedings eventually result in impeachment, Trump would become only the third president in American history to be impeached, after Andrew Johnson and Bill Clinton.

You know who wasn’t impeached? Richard Nixon, who resigned in August 1974 after he realized he likely would be impeached if he remained in office. But it’s easy to mistakenly believe that Nixon did face a formal impeachment inquiry, since pop culture has worked over time to link the threat of impeachment with Nixon in our minds. And of course, comparisons between Nixon’s actions while in office and Trump’s — however problematic — have been made on several occasions throughout his time in office.

Those occasions include Trump’s firing of FBI Director James Comey on May 9, 2017, which brought a torrent of comparisons to the biggest political scandal in American history: Watergate — in particular Nixon’s “Saturday Night Massacre,” in which the president, in the midst of the Watergate investigation, fired the special prosecutor and abolished the office, and also accepted the resignations of the attorney general and deputy attorney general.

So if you find yourself wanting to rewatch All the President’s Men as Trump’s public impeachment hearings begin, you’re not alone. But that’s not the only film about Nixon worth watching. Here, in chronological order of release, are 10 films to watch at home about the 37th president — some that strive for accuracy, and some that blithely toss objectivity and facts straight out the window.

Available to digitally purchase on iTunes or stream on YouTube

Three years before Nixon resigned from office, Emile de Antonio — sometimes called the most important political filmmaker during the Cold War — recast Nixon’s rise as high farce, from his losing bid to become governor of California in 1962 to his election in 1968. (“Millhouse” is a play on Nixon’s middle name, Milhaus.) In his review, Roger Ebert was dubious about the film, annoyed that de Antonio “simply shows us the footage and counts on our knee-jerk dislike of Nixon to carry the day.” But hey: It works. And as a document of pre-Watergate disgust with Nixon, it’s potent.

Four More Years was a groundbreaking, hour-long “guerrilla” TV movie consisting of footage shot during the Republican National Convention in 1972, when “four more years” was the chant from Nixon’s fans. The first independent videotape to be broadcast on television, the film focuses on media coverage, protests, and Nixon’s young supporters, with long, revealing interviews. Some people in the film claimed they didn’t know they’d appear, and the crew tried to stay inconspicuous. Four More Years is revealing — and aired on TV two years before Nixon’s resignation.

Four More Years is available to stream on Vimeo.

All the President’s Men is the ur-text of Watergate movies, released only two years after Nixon’s resignation and based on the 1974 book by Washington Post reporters Bob Woodward and Carl Bernstein (played here by Robert Redford and Dustin Hoffman), whose reporting is widely credited with bringing Nixon down. The film uses archival footage as well, and the result is a taut political thriller that racked up four Oscars.

All the President’s Men is available to digitally rent on iTunes, YouTube, Amazon, Vudu, and Google Play. Cinemax subscribers may also stream the movie from Max Go.

Directed by the legendary Robert Altman, Secret Honor is a one-man drama starring Philip Baker Hall as a (very fictional) post-presidency Nixon. He’s alone with his thoughts, a tape recorder, a bottle of scotch, and a loaded pistol, and as he ruminates on his life and time in office, he reveals his “true” reason for the Watergate scandal. In his New York Times review, Vincent Canby called Secret Honor “something of a cinematic tour de force.”

Secret Honor is available to digitally rent on iTunes and Amazon.

As part of PBS’s “American Experience” series on the presidents, this three-part documentary tells the story of Nixon in sections: “The Quest,” “The Triumph,” and “The Fall.” It’s a strong, clear summary that paints Nixon as balancing between strength and weakness, and it’s a good way to remind yourself about the context around his election and resignation.

American Experience: Nixon is available as part of PBS’s “The Presidents” collection on iTunes.

As with most of Oliver Stone’s movies, Nixon doesn’t purport to be a strictly historical biopic. It’s more of a psychological portrait of a man whose ego and insecurity set him on an inexorable path toward both power and disgrace. And better than any other Nixon film, it evokes the shame of resignation. Stone employs visual tropes drawn from vampire films (notably, a lot of lurking around in the shadows) to suggest Nixon (played by Anthony Hopkins) was willing to suck the life out of anyone, so long as it got him where he wanted to go.

Taking the Rosencrantz and Guildenstern approach to Watergate, Dick is a hysterical take on who “Deep Throat” — Woodward and Bernstein’s informant — really was. In this case, it’s two teenage girls (played by Kirsten Dunst and Michelle Williams) who wander away from a tour in the White House and accidentally find themselves in the middle of the scandal that will take down the president. Besides being pretty clever, Dick also gently satirizes the conspiracy theories favored by filmmakers like Oliver Stone. And Will Ferrell makes a perfect Bob Woodward.

Dick is available to digitally rent from iTunes, Amazon, and Vudu

In 1977, British talk show host David Frost interviewed Nixon, marking the first time the disgraced ex-president had given an interview after his resignation. Nixon picked Frost — some speculated because he thought Frost would go easy on him — but a battle of wits ensued over the four installments, with Nixon famously saying about his deeds that “when the president does it, it isn’t illegal.” The interviews are fascinating, but this fictionalization directed by Ron Howard landed five Oscar nominations and critical acclaim, particularly for the performances by Frank Langella as Nixon and Michael Sheen as David Frost.

Frost/Nixon is available to digitally rent on iTunes, YouTube, Vudu, and Google Play. Starz subscribers may stream the film on Starz’s website.

Nixon’s aides apparently shot a lot of Super 8 footage of the president, and when documentarian Penny Lane (Nuts!, Hail Satan?) got her hands on it, she turned it into an intimate and complex look at the former president and the people around him. “It draws our attention away from the big picture and refocuses it on the main players’ personalities, and on the Watergate era’s perverse, dread-soaked atmosphere,” Matt Zoller Seitz wrote in his review of the film. “Its best quality is its willingness to paint its key players as people, not villains or types.”

Our Nixon is available to digitally rent on iTunes, YouTube, Amazon, Vudu, and Google Play.

Like Our Nixon, Nixon by Nixon lets the president speak for himself, splicing together his secret White House tapes with newscasts and interviews. The result is a damning portrait of a deceitful, desperate man who harbored bitterness, paranoia, racism, and sexism behind his public facade — and one that’s hard to ignore. In his New York Times review, Mike Hale wrote, “It’s an attempt to achieve, in about 70 minutes, a rounded portrait of the undeniably acute and capable man brought down by his demons, if that phrase can stretch to include an innate coarseness and profound dishonesty.”

Nixon by Nixon is available to stream on HBO Go or digitally purchase on Amazon.

Why Dracula absolutely slaps
Giuliani’s $500,000 payout from Fraud Guarantee reveals the hypocrisy of his attacks on Hunter Biden
How air travel and health care got great for the wealthy and worse for everyone else
Trump’s closing impeachment argument involved misrepresenting a tweet from the whistleblower’s lawye...
Facebook and Twitter took drastic measures to limit the reach of a New York Post story about Hunter ...
With Covid-19 cases at record levels, states are rolling out new restrictions