While some states try to ban abortion, these states are expanding access 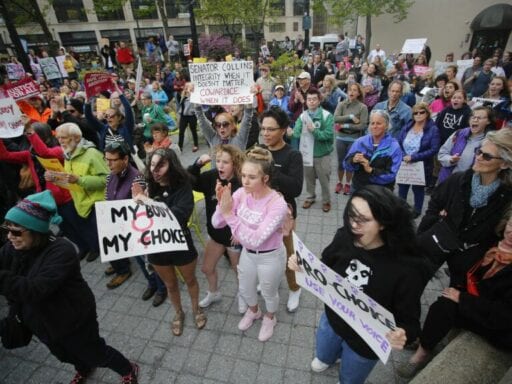 Maine, Illinois, and other states are removing restrictions as states like Georgia and Alabama add them.

When an abortion law makes headlines in 2019, it’s usually as a ban.

Aggressive abortion restrictions have passed in numerous states in recent months, with some banning the procedure at six weeks or even earlier.

But this week, Maine Democratic Gov. Janet Mills signed into law a bill that will actually expand abortion access in the state by allowing nurse practitioners and physician assistants, not just doctors, to perform the procedure. As clinics in other states are at risk of closing, the Maine law will increase the number of clinics able to perform abortions.

On Thursday, Mills signed a second bill that will require public and private insurance plans in the state to cover abortion.

Maine’s laws are part of a bigger trend, as legislators and advocates in blue states back legislation to lift abortion restrictions. These laws are still outnumbered by anti-abortion bills, but they’re becoming more and more common — about a quarter of the provisions to expand abortion access since 2011 have passed in the past two weeks alone, according to an analysis by FiveThirtyEight.

In years past, “states did not feel the threat to abortion rights and did not want to expend the political capital to pass these laws,” Elizabeth Nash, senior state issues manager at the Guttmacher Institute, a nonprofit focused on reproductive health policy research, told Vox. But with Donald Trump in the White House, Justice Brett Kavanaugh on the Supreme Court, and a potential challenge to Roe v. Wade on the horizon, that’s changing. Now states like Maine, Illinois, and Vermont are taking steps to shore up abortion access, with the understanding that federal protections for the procedure may soon be under threat.

These states are expanding abortion access as others are restricting it

While near-total abortion bans like those in Georgia and Alabama have captured a lot of attention, several states are moving in the opposite direction. Below are states that have passed laws to protect or expand abortion access this year.

Opponents of the measure said it would put patients at risk, according to the Portland Press-Herald. But research shows that advanced practice clinicians, a category that includes physician assistants, nurse practitioners, and nurse midwives, provide the same level of abortion care as doctors, Nash said.

The measure could increase the number of clinics performing aspiration abortion, the most common type of in-clinic procedure, from three to 18, according to ThinkProgress. The law will have an especially big impact on Maine’s many rural residents, who may live far away from clinics staffed by doctors, Nash said.

On Thursday, Mills signed another bill, this one requiring all public and private insurance plans that cover prenatal care to cover abortion abortion as well. Previously, Maine’s state Medicaid program, MaineCare, only covered abortion in cases of rape, incest, or a threat to the pregnant patient’s life.

Opponents of taxpayer funding for abortion criticized the bill, according to the Associated Press, but reproductive rights groups applauded its passage, saying it would expand access to abortion for low-income patients.

“As states like Alabama, Georgia, and Missouri are in a race to the bottom to ban abortion and put politics over the lives and well-being of women and their families, Maine has recognized that no one should be denied coverage for abortion care just because they’re poor,” said Destiny Lopez, co-director of All* Above All, a group that advocates for public insurance for abortion, in a statement on Thursday.

New York’s Reproductive Health Act, passed in January, has gotten a lot of attention because it allows abortions after 24 weeks if the fetus is not viable or there is a threat to the mother’s health. Opponents have cast this provision as extremism on the part of Democrats, but supporters of the measure say it is necessary because previous New York law forced patients to travel out of state and pay thousands of dollars to obtain an abortion when they were seriously ill or carrying a fetus that could not survive after birth.

The Reproductive Health Act, like the Maine law, also allows advanced practice clinicians to perform abortions. Though it’s gotten less attention, abortion law experts say this provision may affect even more patients than the one affecting abortions later in pregnancy. “Most abortions do take place earlier in pregnancy,” Nash said, “and if you expand the pool of providers, then that potentially has more of an impact.”

Still, Nash added, “these protections work together to make sure people have access.”

Democratic Gov. J.B. Pritzker on Wednesday signed into law the state’s Reproductive Health Act, which makes reproductive health care, including abortion, contraception, and maternity care, a fundamental right in the state, according to Guttmacher. The law protects access to abortion up to viability (which experts say is around 24 weeks’ gestation) and after that if deemed medically necessary by a doctor. The change ensures that abortion will remain legal in Illinois even if Roe v. Wade, which established the right to an abortion nationwide in 1973, is overturned.

The law also requires public and private insurance plans in the state to cover abortion, and allows advanced practice nurses and physician assistants to provide the procedure.

Anti-abortion groups have criticized the new law. “While a growing number of states are working to advance popular pro-life laws, Illinois is trying to outdo New York’s abortion extremism — and unborn children and their mothers will pay the price,” Jill Stanek, national campaign chair for the Susan B. Anthony List, told the Chicago Sun-Times.

But doctors and reproductive rights advocates have praised the legislation. “This landmark legislation means that an individual’s health, not politics, will govern decision-making,” Erica Hinz, an OB-GYN in Illinois and a fellow with the group Physicians for Reproductive Health, said in a statement on Wednesday.

Republican Gov. Phil Scott on Monday signed into law a bill that, like the Illinois law, makes abortion and other reproductive health care a fundamental right in the state. The Vermont law goes beyond the Illinois measure because it protects abortion access throughout pregnancy, including after viability, Nash said.

The Trust Nevada Women Act, signed by Democratic Gov. Steve Sisolak last month, removes a number of restrictions on abortion. It gets rid of a requirement that doctors tell patients about the “emotional implications” of an abortion, eliminates criminal penalties for patients who perform their own abortion without the advice of a doctor, and removes a requirement that doctors ask about a patient’s age and marital status before performing the procedure.

“With our reproductive rights under constant attack across the country, we are proud that Nevada legislators voted to ensure that Nevada women and families are able to make the best decisions for their health and well-being,” said Caroline Mello Roberson, state director of NARAL Pro-Choice Nevada, which advocated for the law, in a statement last month.

In addition to these laws, legislation to expand or protect abortion access is under consideration or could be forthcoming in Rhode Island, New Mexico, Washington, and Oregon, Nash said. “There could be momentum going into 2020.”