White evangelicals are the only religious group to support Trump 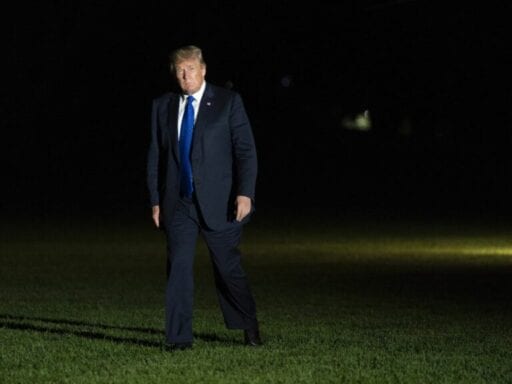 A new poll says 71 percent of white evangelicals approve of his presidency.

Even after a politically stormy summer, white evangelical support for Donald Trump has remained strong.

White evangelicals remain the only religious group in America to view Trump favorably according to the poll. While white mainline Protestants — which include historically progressive denominations like Episcopalians and Presbyterians — remain about evenly split over Trump, other religious demographics overwhelmingly say they view his presidency negatively. Fifty-nine percent of Catholics and a full 75 percent of black Protestants view Trump negatively, as do 65 percent of the religiously unaffiliated.

What all these numbers suggest is that Trump’s actions — positive or negative — will continue to have very little effect on the opinions of actual voters. In particular, there appears to be very little Trump can do to alienate his white evangelical base, who have continued to support him en masse.

Even this summer’s family separation crisis — during which several prominent evangelical leaders, including the usually pro-Trump Franklin Graham, spoke forcefully against Trump’s family separation policy — seems to have done little to ameliorate Trump’s base’s affection for him.

In fact, PRRI CEO Robert Jones told me, religious groups have remained remarkably consistent when it comes to their stance on Trump throughout his administration. “You might think with as many different revelations and controversies coming out of this administration, there might be some great shuffling of the board, but … the support or opposition to Trump among religious groups has remained largely steady since the inauguration.”

Jones told Vox that religious and ethnic identity have been reliable predictors of political partisanship since Ronald Reagan’s presidency. “Since Reagan, the basic religious landscape has been very consistent,” he said. White Christian groups — evangelicals, mainline Protestants, and Catholics — have tended to support the Republican candidate, while black Protestants, Hispanic Catholics, the religiously unaffiliated, and other ethno-religious groups lean Democratic.

It’s unclear, however, how politically significant this shift will be. White mainline churches are emptying at an astonishing rate. In a piece for Vox last year, Lyman Stone argued that this decline, in turn, opened up the metaphorical playing field for adrift voters to be swept up into more extreme political movements, wondering whether “without the common moral language of liberal Protestantism to steer these voters away from demagogues on the left or the right, might they not drift into more extreme political positions?”

Yet, as other religious identity groups solidify their political positions over Trump, it’s worth keeping an eye on white mainline Protestants. They may be the only religious “swing voters.”

Apple might kill the iPhone home button for good. One question: Why?
Trump dismisses his own government’s guidance about masks as “politically correct”
What Andrew Yang is doing next: A push for UBI and “human-centered capitalism”
Steve King still doesn’t think of himself as racist
With “Kill This Love,” K-pop queens Blackpink have made YouTube and iTunes history
The Good Place gets weirder than usual when “Chidi Sees the Time-Knife”