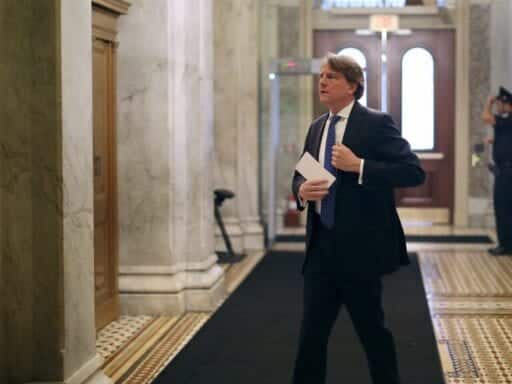 According to the New York Times, McGahn is cooperating “extensively” with special counsel Robert Mueller’s obstruction of justice inquiry.

President Donald Trump may not be speaking to special counsel Robert Mueller, but White House Counsel Don McGahn has. At length. Because he fears Trump may be setting him up to take the fall on potential obstruction of justice and that he’d then wind up like John Dean, former White House counsel to President Richard Nixon who eventually flipped: in prison.

Michael Schmidt and Maggie Haberman at the New York Times reported on Saturday that McGahn has taken part in at least three voluntary interviews totaling 30 hours with Mueller’s team of investigators in the Russia probe over the last nine months. He’s discussed a wide range of matters, including the president’s decision to fire former FBI director James Comey, the ouster of former national security adviser Michael Flynn, and Trump’s public and private griping about Attorney General Jeff Sessions.

According to the Times, two of Trump’s original lawyers, John Dowd and Ty Cobb, devised an “open-book strategy” for Trump when the Mueller investigation first started, the idea being that if Trump did nothing wrong, as he insisted, then why not be as cooperative as possible? McGahn was reportedly dubious of the plan but went along, and when the special counsel’s office asked to interview him last year, he was “surprised” but complied when Trump and his lawyers gave him the go-ahead.

The report describes McGahn and his lawyer, William Burck, as “stunned” at the Trump team’s willingness for him to talk to Mueller. So much so that they developed a theory that he’s being set up:

Mr. McGahn and his lawyer, William A. Burck, could not understand why Mr. Trump was so willing to allow Mr. McGahn to speak freely to the special counsel and feared Mr. Trump was setting up Mr. McGahn to take the blame for any possible illegal acts of obstruction, according to people close to him. So he and Mr. Burck devised their own strategy to do as much as possible to cooperate with Mr. Mueller to demonstrate that Mr. McGahn did nothing wrong.

Schmidt and Haberman draw parallels between McGahn and Dean, who served as White House counsel under the Nixon administration and was a central figure in the Watergate scandal. He took part in Nixon’s cover-up of the Democratic Party headquarters and eventually flipped on his boss after being fired. He eventually pleaded guilty to obstruction of justice after striking a deal with the prosecution and received a prison sentence.

“This sure has echoes of Richard Nixon’s White House counsel, John Dean, who in 1973 feared that Nixon was setting him up as a fall guy for Watergate and secretly gave investigators crucial help while still in his job,” historian Michael Beschloss told the Times.

McGahn was leery of becoming Trump’s John Dean. So, after Cobb and Dowd encouraged cooperation with Mueller, McGahn – fearful he was being set up for blame on obstruction issues – talked and talked. @nytmike and me https://t.co/g0rA69t8ak

The publication also reports that it’s not clear that Trump “appreciates the extent to which” McGahn has cooperated with Mueller and that the president has wrongly believed that McGahn would act as a personal lawyer for him. McGahn views his role as a protector of the presidency, not Trump.

That McGahn is speaking with special counsel Mueller is not new information, but the extent to which he’s cooperating — and his potential motivations for doing so — are. The report also details a distant relationship between Trump and McGahn, who has overseen Trump’s judicial appointment and deregulatory push at the White House but also appears not to be overly warm with the president himself.

According to the Times, Trump and McGahn rarely speak, and when they do, chief of staff John Kelly and other advisers are usually present. Trump questions McGahn’s loyalty. McGahn, behind his back, calls the president “King Kong.”

Trump on Saturday reacted to the Times story in a tweet and said he allowed McGahn and all other “requested members” of the White House staff to cooperate with Mueller. “Most transparent in history,” he wrote.

I allowed White House Counsel Don McGahn, and all other requested members of the White House Staff, to fully cooperate with the Special Councel. In addition we readily gave over one million pages of documents. Most transparent in history. No Collusion, No Obstruction. Witch Hunt!

Social media’s conspiracy theory problem isn’t going away
Trump digs in on immigration amid crisis
Migrant children describe abuse, being forcibly medicated at youth shelters
Lessons from Indigenous firefighters on the front lines of Western wildfires
The opioid epidemic isn’t unsolvable
Worldcoin wants to give you cryptocurrency — in exchange for scanning your eyeballs