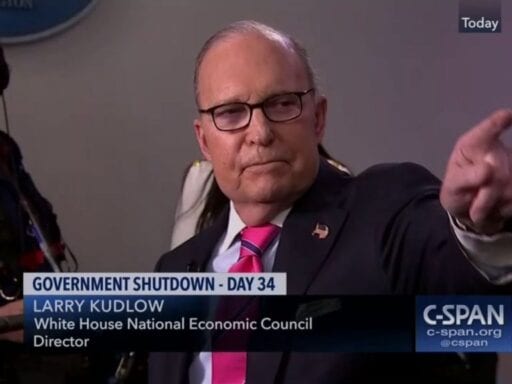 Trump aides committed a string of gaffes over the course of a single day of media appearances.

On Thursday morning, President Donald Trump’s ultra-rich commerce secretary, Wilbur Ross, expressed bewilderment during an interview with CNBC over the fact that federal workers who have not been paid in about a month because of the government shutdown are resorting to food banks for meals.

“The 30 days of pay that some people will be out, there’s no real reason why they shouldn’t be able to get a loan against it,” Ross said, suggesting the solution is for workers to take out loans and, therefore, go into debt.

As you’d expect, Ross’s comments were widely criticized — and even inspired a parody video of his comments dubbed over a clip of the tycoon character Mr. Burns from The Simpsons.

The administration’s efforts on Thursday to spin the shutdown didn’t improve from there. Talking with reporters shortly after Ross’s CNBC appearance, Larry Kudlow, director of the National Economic Council, described federal workers who are being forced to work without pay as “volunteering.” But as a reporter pointed out to him, it’s “not volunteering if you’re being forced to work without pay.”

Kudlow’s effort to clean up his gaffe didn’t really help matters, as he wound up saying that workers continue to show up “presumably because of their allegiance to President Trump” instead of worries that they’ll lose their jobs if they don’t.

Larry Kudlow: “I’m not even going to go there. You know what I’m saying. It’s very clear…” pic.twitter.com/w1CNOmafBZ

Ross and Kudlow’s tone-deaf comments come amid indications the shutdown is not only making life difficult for the 800,000 federal workers who aren’t receiving paychecks and their families, but presenting real public safety risks.

“In our risk-averse industry, we cannot even calculate the level of risk currently at play, nor predict the point at which the entire system will break,” the statement read.

The shutdown is also negatively impacting law enforcement and national security agencies. FBI agents report that they are losing confidential sources because they have no money to pay them, and a group of former Homeland Security secretaries, including John Kelly, released a statement on Wednesday calling for the shutdown to end as quickly as possible. On Tuesday night, the Coast Guard’s top officer, Adm. Karl Schultz, posted a video on Twitter in which he says he “find[s] it unacceptable that Coast Guard men and women have to rely on food pantries and donations to get through day-to-day life as service members.”

White House strategic communications director Mercedes Schlapp was grilled about whether the risk of a deadly plane crash or terror attack is worth Trump’s wall during an NPR interview on Thursday. But she repeatedly and uncomfortably dodged host Steve Inskeep’s line of questioning, and instead tried to pin blame on Democrats for their alleged failure to “come to the table” and negotiate with Trump.

But as Inskeep pointed out, it was Trump — not Democrats — who decided it was a good idea to shut down the government, instead of signing funding legislation that didn’t allocate money for his border wall.

“The president is the one making the demand. Is the wall worth people getting killed?” he asked her. She had no answers.

You can listen to the full interview (via David Edwards of Raw Story) on NPR.

The White House’s disastrous day of spin on Thursday comes while poll after poll indicates Trump is long the argument about the shutdown.

A new Fox News poll finds that a much larger percentage of Americans consider the shutdown and the problems it has created to be a crisis (75 percent) than the percentage of people who consider the situation at southern the border to be a crisis (59 percent). Politico/Morning Consult and CBS News polls released Wednesday both found Trump’s disapproval rating at all-time highs and continuing to slide along with the shutdown. And no end is in sight.

Put it all together, and longtime Trump observer Daniel Dale of the Toronto Star was left wondering if Wednesday and Thursday were the two worst days of the shutdown so far for Trump.

“There’s no messaging plan,” Dale said on MSNBC. “The president thought that simply talking over and over about the scariness of illegal immigrants, talking about crime, would be enough to somehow win this battle. But he’s, I think, missed the other part of the communications picture, which is empathy.”