White UConn students were arrested for shouting the n-word. Black students say the incident is part of a larger problem. 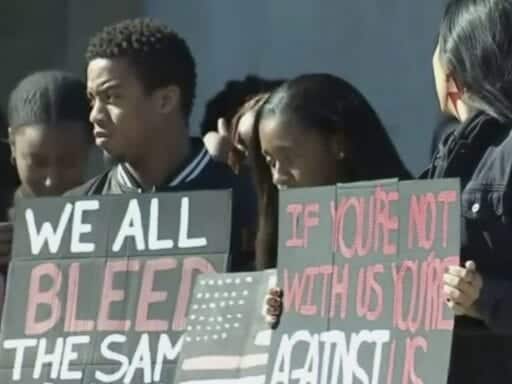 Share
Loading...
University of Connecticut students hold signs during a campus march and rally against racism on October 21, 2019. | Screenshot/Eyewitness 3 News

Students say the university needs to do a lot more to address a deeper culture of racism on campus.

For more than a week, students at the University of Connecticut have been outraged over a recent video showing a small group of white students walking on campus, yelling the n-word. As anger over the incident has grown, UConn’s black students have stressed that the controversy highlights a longstanding set of problems on their campus: Racist acts are continuing to alienate the school’s black students, and UConn’s administration is not doing enough to punish students for it.

The current controversy stems from an 11-second video that spread online after it was recorded on October 11 by a black UConn student sitting in his apartment. In the video, three students are seen walking across the parking lot of the school’s Chester Oaks apartment complex at night. Two of them can be heard saying the n-word multiple times in quick succession, saying the term louder with each repetition.

If you have any info regarding this racist recording please email [email protected] ✊ ✊ ✊ ✊ pic.twitter.com/WZxHwBeGZM

On Monday, the same day that students held a march and rally over the incident, campus police arrested two of the students in the video, identifying them as Jarred Karal and Ryan Mucaj. According to the Washington Post, in an incident report filed by police, Karal and Mucaj, both described as white, 21-year-old male students, had been playing “a game in which they yelled vulgar words” as they walked with a third student.

After arriving at the parking lot of the student apartment complex, they “switched to saying a racial epithet,” according to the report. The men were loud enough for some students in the complex to hear the shouting from their apartments.

On October 21, Karal and Mucaj were charged with ridicule on account of creed, religion, color, denomination, nationality or race, a charge that focuses on violations of the state’s hate crimes statute. The Post notes that this is a misdemeanor charge, and that state laws dictate that the maximum punishment for this offense can range from 30 days in jail to a small fine, or a combination of the two.

The two students were released from custody after promising to return for an October 30 court date. The third student who was with them in the video was not charged, and police said that their investigation showed that he did not use the slur. A UConn spokeswoman told the Post that campus administrators are still looking into what disciplinary action the students will face.

The school says that the use of the slurs is troubling. “It is supportive of our core values to pursue accountability, through due process, for an egregious assault on our community that has caused considerable harm,” University of Connecticut President Thomas C. Katsouleas said in a statement on Monday evening.

But as the fallout from the incident has continued, black students at UConn say that Katsouleas has largely been missing in action as the racial slur controversy has unfolded, and that the university has had an inadequate response to both the recorded incident and other incidents of racism on campus. Now students are calling for the university to do more than condemn racism through public statements — they want the school to take aggressive action to make sure that such an incident doesn’t happen again.

Student outcry over the video grew quickly, as black students argued that the incident was reflective of deeper issues when it comes to racism at the University of Connecticut, where black students make up roughly 7 percent of the student body.

Black students on campus say that they are especially concerned with the university’s limited response to the incident in the immediate days after the video began spreading online, noting that the first campus response came not from Katsouleas, but from the university’s housing department, which held a community meeting for students to discuss the issue. According to the editorial board of the campus newspaper, Katsouleas waited until a week after the incident to send an email to students condemning the video and announcing that the school would launch a nationwide search for a chief diversity officer.

Students, meanwhile, argue that the university needs to take strong disciplinary action against the students in the video, with the school’s editorial board condemning the university’s response as “painfully slow and underwhelming.”

“Contrary to what many may believe, racism is alive and well at UConn and beyond,” the board noted in a recent editorial.

University faculty, like UConn sociology professor Noel A. Cazenave, have also issued public criticism of the university’s response. In a letter to the editor published Monday in the campus newspaper, The Daily Campus, Cazenave argued that the university has long failed to adequately respond to racism and inequality on campus. He also notes that the issue isn’t limited to students, pointing to the university’s dwindling number of black administrators and stagnant level of black and Latinx faculty.

“By not responding quickly and decisively to UConn’s most recent incidents of racial hostility you have stumbled out of the gate and left the impression that you are both ignorant of and uncaring about our concerns,” Cazenave added in his letter, which was addressed to Katsouleas. “ Even more importantly, by your painfully slow response —following more than a week of silence — you have unwittingly condoned campus racism in ways that makes people of color here at the University of Connecticut feel both unwanted and unsafe.”

Student groups have also called attention to another recent incident involving racial slurs, this one occurring when two fraternity members allegedly used a racial slur against a female student at a party. On Monday, UConn’s NAACP chapter issued a list of eight demands for the university, arguing that it needs to take disciplinary action against the students involved in both incidents to show that racism on campus will not be tolerated.

“Black students at this university account for about 7% of the student population. We have a collective responsibility to ensure their dignity, safety, and rights as students of UConn are protected,” the group said in its letter. They added that the use of slurs on campus “displays a lack of compassion, morality, and respect.” The UConn NAACP chapter has called for the fraternity involved in the other recent incident to be investigated, and for the school to take immediate action to school to improve faculty diversity.

As criticism of the university’s response has mounted, much attention has been paid to Katsouleas, who began his tenure earlier this academic year. So far, students and some faculty argue that he has not done enough to show that his administration takes fighting racism seriously.

Katsouleas, meanwhile, has worked to stress his belief that the university both has a zero-tolerance policy against racism and should not be defined by the recent racist incidents. “It is important that we remember that we get to decide who represents our community, and what behavior truly reflects who we are at UConn,” he wrote in his email to students sent last Friday. “To me, the best among us represent who we are — the 99%-plus who are good citizens and share our values, not the few who don’t. This is a choice we get to make.”

Unfortunately, these sorts of statements have only fueled the argument that university officials are more concerned about preserving their reputation than adequately responding to and punishing racism. And the frustration UConn’s black students feel builds off a recent wave of student activism that has seen renewed public attention in the wake of protests at the University of Missouri and other schools back in 2015.

As Vox’s Libby Nelson explained at the time, those protests, and criticism of racist incidents on other college campuses, fit into a long tradition of protest that has seen black students fight for their place at the institutions that once used race to exclude them. “While college leaders like to think of their institutions as progressive places, colleges, like other venerable American institutions, have both a past and a present laced with racism,” Nelson wrote. “For the first time since the late 1960s, students are forcing them to grapple seriously with it.”

In recent years this activism has continued as students, motivated by grassroots movements like the Movement for Black Lives, argue that college and university campuses must respond better to racism that has occurred in a school’s past and that still occurs now. Students say this matters not only because it is the right thing to do, but because it is a necessary step in showing black students that they are supported on campus. A similar argument has been made by UConn students as they call for the university to do more than damage control in the wake of the recent high-profile incident — to actually take the necessary steps to end the racism these students face on campus.

“To just experience that on a daily basis and then having something that gets out to the public that everybody can see and understand it’s really impactful for the rest of us,” Mason Holland, a UConn freshman, told local reporters.

Live results for Tuesday’s primaries
Michael Cohen’s testimony could be bad news for Donald Trump Jr.
The inescapable pressure of being a woman on Zoom
The biggest stories headed into the 2020 Grammys
Mollie Tibbetts’ father implores people to stop using her as a “pawn” in immigration debates
Why the coronavirus outbreak might be much bigger than we know