Who are the black squares and cutesy illustrations really for? 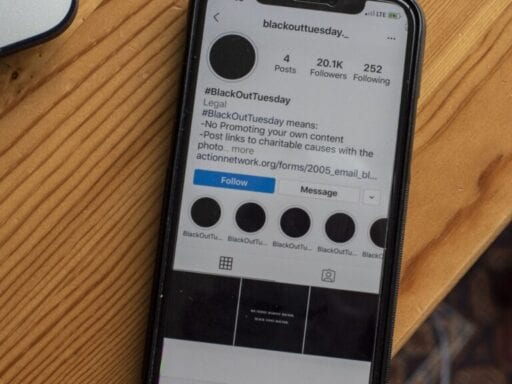 Instagram can be an organizing tool. On #BlackOutTuesday it became the opposite.

After a weekend of unrest, many people posted black squares on their Instagrams on Tuesday. The first dozen on my feed were from friends, most of them white, with captions that expressed solidarity with Black Lives Matter, or a commitment to educate themselves and use their privilege to fight against racial injustice. After a few scrolls, the black squares started coming from brands, companies that expressed similar sentiments while also trying to sell me makeup or home goods (or worse, a football team with an explicitly racist name). Then came the celebrities, including one Real Housewife who days earlier had made headlines for writing “all lives matter” on the very same platform.

The black squares were part of a movement called #BlackOutTuesday, where for one day the idea was that people would cease Instagram’s ambient noise of dinner plates and napping cats and instead vow to stay silent. “Muted,” read some of the posts, “but always learning, and always listening.”

It was a turn in discourse, in the wake of the killing of George Floyd and the worldwide protests that have erupted in days since, that has been largely critical of white silence — on an election day, no less. But #BlackOutTuesday is only one of more than a week’s worth of what many have criticized as dubious and unhelpful social media trends ostensibly in the service of ending police brutality. Who, really, are the black boxes and pastel illustrations of victims for?

Feminista Jones, an author, speaker, and longtime organizer, noticed the trend when, after midnight on Monday, the Black Lives Matter hashtag was being inundated with black squares. After digging into the source, she found that the trend originated from two black women in the music industry, Jamila Thomas and Brianna Agyemang, who encouraged folks to spend the day reflecting on ways to support the black community under the hashtag #TheShowMustBePaused.

The original goal was a reckoning for the music industry’s long history of profiting off of black artists, but the problem was that many who saw the squares on Instagram decided to participate in the trend while also adding hashtags like #BlackLivesMatter and #BLM. “That’s when I realized they’re erasing everything off of #BlackLivesMatter,” Jones says. On Monday night, she says, there were about 11.9 million posts under the hashtag. “It took seven years to get 11.9 million posts, and within seven hours, there were already a million more of them, mostly black boxes.”

Jones, along with many other black activists, was quick to inform allies that posting empty boxes to the movement’s hashtag was pushing out valuable information that organizers used to share information, like where to protest and donate, as well as video evidence of police brutality. The backlash to #BlackOutTuesday was almost immediate, with prominent Black Lives Matter activists pleading for people to delete posts that included the hashtag, and others pointing out the largely performative nature of the trend.

“This performative ally stuff is not helping, and this really catered to the people who want to show that they care.”

“This performative ally stuff is not helping, and this really catered to the people who want to show that they care,” Jones says. “They thought this little black box was going to be solidarity. I’m like, ‘This is not how movements work. This is not how we’re supposed to be using social media.’ And people fell for it because it takes minimal work and minimal effort.”

Jones advises anyone participating in a social media trend to first research where it came from — the official pages for Black Lives Matter or the Movement for Black Lives are good places to start — and to think critically about what their post achieves. “Why would you stage something that even remotely suggests blacking out anything on an election day?” she asks. “Why would you blackout anything in the middle of the biggest uprising of our time?”

Black squares are far from the only largely performative social media meme happening right now. For years, people have shared solidarity sentiments in the form of illustrations or stylishly designed statements in trendy fonts, or by “challenging” each other to tag 10 people in their Instagram Stories to show support for Black Lives Matter. On the more egregious end, videos have circulated of influencers staging photo shoots in front of looted buildings, or pretending to drill a hole in a boarded-up storefront.

This lady stopped someone boarding up a store in Santa Monica so she could hold the drill for a picture, then drove away. Please don’t do this. #santamonicaprotest #BlackLivesMatter #BlackLivesMatterLA pic.twitter.com/lgt2rZogk9

“People have good intentions, says Anthony James Williams, a writer, facilitator, and sociology PhD candidate. “Often, these cutesy illustrations — or the girl who played Brittany on Glee [Heather Morris] who did a TikTok dance for #BlackLivesMatter — don’t harm us. But right now, the biggest thing is not necessarily making a watercolor Black Lives Matter sign or doing an interpretive dance. That’s not really helping out people on the ground. If someone’s doing that in addition to other actions, cool. But if that’s all that you are contributing to the struggle right now, there’s a lot more you can do, even if it’s just literally making phone calls to your local police department to tell them to release people who’ve been protesting.”

People on social media are always finding new ways to show their asses, but never have more seemed to be publicly floundering online than right now. “I was hesitant to post this, but” has become the rallying cry of many of the newly radicalized, the people who have watched for days (years, really), as others in their circle have posted anti-racist messages, protest footage, and donation receipts before finally realizing that the social cost of not saying anything outweighed the cost of saying something wrong.

There are, to be sure, often conflicting directives on how to be a good ally, which can lead to confusion and paralysis from even the most well-intentioned people. As many times as someone is told that white silence is violence, they will also be told that they need to listen and make room for black voices. They are told to confront their privilege, but also to decentralize themselves in their statements. They hear that performative slacktivism is worse than nothing at all, but feel implicit pressure to share the same memes and images as everybody else who would like to think of themselves as on the right side of history. After all, #BlackOutTuesday originated with two black women fighting for the cause, so how could it be wrong?

But allies have also never had as many resources available to them as they do right now. Guides on white allyship from black organizers are on nearly every major newspaper and publication; they’re going viral on social media. There’s less of an excuse for ignorance now than there was after the Women’s March and the #MeToo movement in 2017, after the election in 2016, or after the Trayvon Martin murder in 2013. Anti-black racism has always been part of the fabric of America, and the Black Lives Matter movement is only a recent chapter in the long history of the fight for civil rights.

By now, American society has largely moved past the point of raising awareness when it comes to institutional racism. “In 2016, that would have made sense to me because of where people were,” Williams says. “But we are too far in this political moment, particularly with the president that we have in office, to think that [posting] is enough.”

Particularly upsetting was the flurry of posts from white people depicting images and videos of George Floyd’s murder in the days following his death. On her podcast What A Day, host Akilah Hughes reminded listeners that white death is almost never shared in the same way. “When I say ‘don’t look away’ I don’t mean consume black death like it’s a meme on TikTok,” she said. “I mean look in the mirror. Look at your family. Look at the community you live in. Look at your friend group. Look at the wealthy white woman with the rescue dog in the goddamn park. And don’t look away. Because we know what the problem is. No one is unclear on what the problem is. Where is the justice?”

This isn’t to say that allies can’t help on social media, which has been a crucial tool of organizing for as long as it has existed. K-pop stans, for instance, have flooded racist hashtags and spammed police watchdog cameras with videos of their favorite stars, while at least one LARPer shared a helpful tip on how to create a lightweight protest shield. Though many allies express their hesitancy to post on social media over fear of seeming performative, publishing screenshots of donations and asking followers to match them helped raise $20 million for the Minneapolis Freedom Fund, which provided bail for jailed protesters, in just four days.

“Peer pressure can actually work,” Williams says. “This is the time where, actually, you should be posting about it, and there’s proof that this works.” They hope that social media will encourage more people to donate to the funds that haven’t yet reached their goal, like the funds for women, queer, and trans black people killed by police and organizations without big brand names like the ACLU.

It’s why one of the most effective memes from the past week has been a call for people to show they donated to a cause. “Open your purse,” a clip from a viral video series on TikTok of the character Rosa, has been a catchy response to anyone who claims to support the movement but hasn’t offered proof of direct action.

“People should be sharing bail funds, they should be sharing the fundraisers for the families of the victims,” says Feminista Jones. “They should be posting things that are calling out these brands and these corporations that now all of a sudden are talking about how black lives matter to them. A couple of weeks ago it was ‘in these uncertain corona-times,’ now it’s ‘Black Lives Matter.’”

For those who do want to do everything they can to help the movement, her advice is the same as many black activists who’ve been in it for the long haul. “I want people to keep their heads up, keep focused, really start educating themselves, listen to the organizers who have been doing this for a long time, stop with the performances, and focus on the tangible and direct actions that will help the people out here doing the work.”

America needs to think more about the costs of policing
Kamala Harris asked Brett Kavanaugh if men could be friends with some women — while hurting others
The double standards Kamala Harris may face at the debate, briefly explained
Marcia Fudge confirmed as housing and urban development secretary
The GOP’s existential crisis, explained by a former Republican Congress member
Chris Hayes and Ezra Klein process this wild election