Who could be appointed to replace John McCain in the Senate, and the process behind it, explained 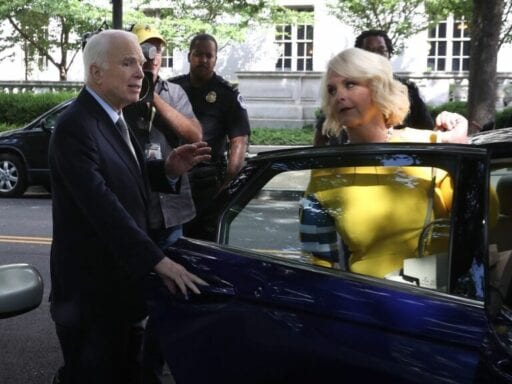 The appointee, a Republican likely named by Gov. Doug Ducey, will hold McCain’s seat until the next elections in 2020.

Sen. John McCain, 81, announced his decision to discontinue treatment for the brain cancer he’s been battling for more than a year on Friday, making clear that the Arizona Republican is unlikely to return to the Senate. Attention has now turned to the process for replacing McCain in the legislative body in which he’s spent so much of his career.

The former Navy pilot, Vietnam prisoner of war, and Republican presidential nominee has spent 30 years in the United States Senate. It’s not clear by Friday’s statement how long he has left to live, or if he will step down as his health declines, but it’s likely that Arizona’s governor will be in a position to tap someone to take over his seat at some point in the future.

Arizona Gov. Doug Ducey, a Republican, is legally required to fill vacancies in Arizona’s US Senate delegation. Whoever Ducey chooses will stay in office until 2020.

The governor has remained silent on who he has in mind out of respect for McCain and his family. By Arizona state law, he must tap someone of the same party as McCain — meaning a Republican — and he’s ruled himself out. After McCain’s announcement on Friday, Ducey lauded the ailing senator as an “American hero” who has always put the country before himself. “From Vietnam to the halls of the US Senate, the spirit of service and civility that has guided Sen. McCain’s life stands as a model for all Americans, regardless of political affiliation,” he said.

But with primary races in Arizona set for Tuesday and Republicans holding a slim 51-49 majority in the US Senate, whispers about who will replace McCain have grown louder.

My family is deeply appreciative of all the love and generosity you have shown us during this past year. Thank you for all your continued support and prayers. We could not have made it this far without you – you’ve given us strength to carry on. pic.twitter.com/KuAQSASoa7

Had McCain left office before May 30, his Senate seat would have been on the ballot in Arizona in November 2018. His junior colleague, Republican Sen. Jeff Flake, has already announced he’s retiring, meaning both of Arizona’s seats would have been up for grabs.

But since it’s after May 30, it will likely be Ducey who picks the replacement. There’s nothing in the state’s constitution that allows for a special election after that date, as Amber Phillips at the Washington Post explains:

Election officials told The Washington Post in the spring that there was the possibility of a legal battle to try to hold a special election in 2018 for McCain’s seat, even if candidates have to file after that May 30 deadline.

But that was closer to May. Now a federal election is just months away, and no matter what happens to McCain’s seat in the coming days or weeks or months, it seems very probable it won’t be on the ballot again until 2020.

So, Ducey would pick a replacement who would serve at least until 2020, the next general election. And the winner of that election would serve the rest of McCain’s six-year term, which ends after the 2022 election, so in January 2023. The replacement has to be a Republican, like McCain.

Members of the GOP are likely breathing a sigh of relief that both of Arizona’s US Senate spots won’t be in limbo, since the contest to take Flake’s seat is expected to be a contentious one. It’s one of the few opportunities Democrats have to win a senate seat currently held by Republicans in November, with Democrat Kyrsten Sinema consistently polling in the lead ahead of every one of her Republican competitors.

McCain’s resignation or death while in office would mark the first time in Arizona’s more than 100-year history that a governor would have to fill a Senate seat there by appointment. Gov. Ducey has not publicly said who he might consider to take over McCain’s seat, except to say he won’t appoint himself. Ducey’s office has called conjecture about who he might pick “disgraceful.”

That hasn’t stopped the speculation though. Given Republicans have only a 51-seat majority after Democrat Doug Jones’s win in Alabama, every vote counts, and the GOP’s paying attention.

The Arizona Republic listed out a number of names that have been floated as potential appointees to replace McCain. They are:

One possible contender would have been Republican Rep. Martha McSally, but she is already running for the Senate this year to take Flake’s seat. The other was Dr. Kelli Ward, also running for that seat.

McCain is considered a less reliable Republican vote than many of his colleagues, and whoever replaces him is likely to be more solidly aligned with the rest of the GOP. Ducey is more or less a traditional Republican himself, and he will likely choose someone his party’s leaders would approve of.

Heading into November, that could smooth the road for Republican leaders on some issues as they try to navigate the 51-49 Senate to get judicial and Cabinet nominees approved and other legislation passed.

However, on the big-ticket items — namely, Obamacare repeal or welfare reform — McCain’s replacement might not make much difference.

The problem for reviving the health care debate, for example, is that a Democrat now occupies the formerly Republican-held seat in Alabama and Sens. Susan Collins (R-ME) and Lisa Murkowski (R-AK), who have opposed every repeal plan so far, don’t sound like they want to revisit the issue. Those three alone — plus Sen. Rand Paul (R-KY), who opposed the latest iteration of repeal, known as Graham-Cassidy — form an imposing wall for Republican leaders to overcome no matter who fills McCain’s seat.

So on smaller items and appointments, the new Arizona senator could make things a little easier for GOP leaders. But getting any major legislation through a 51-49 Senate in an election year is still going to be tough.

If McCain’s seat doesn’t open up soon, there is a possibility that it won’t be Gov. Ducey who appoints his replacement, as he is up for reelection this year. He is expected to win his primary on Tuesday against Arizona Secretary of State Ken Bennett, who earlier this year found himself in hot water over declarations that he wouldn’t choose Cindy McCain as the senator’s replacement. Ducey will face the winner of the Democratic primary — former Arizona Department of Education official and professor David Garcia, state Sen. Steve Farley, or Kelly Fryer, the CEO of the YWCA Southern Arizona — in November. They’ve all declined to say who they might appoint to McCain’s seat if elected.

Ducey’s approval rating has fallen in recent weeks, and he is facing a tough dynamic with angry and fired-up teachers. Arizona was one of the states with teacher protests, with tens of thousands of teachers marching on the state capitol, demanding better pay. But as the Arizona Republic points out, Ducey has a history of outperforming his poll numbers.

A brief guide to the Oscars’ Best Picture nominees
Live results for the Missouri primary elections
Joe Kennedy is officially going after Ed Markey’s Senate seat
The deadline for the UK’s “Brexit” from the European Union is looming
Trump reportedly considered putting an ally willing to dispute election results in charge of the DOJ
Goodnight MoviePass, you chaotic, fantastic disaster