Who died in Game of Thrones’ Battle of Winterfell, and who survived: the full list 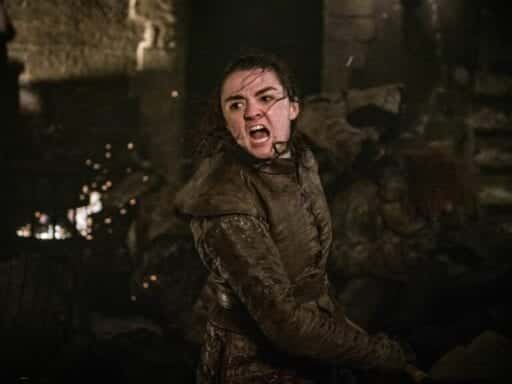 As expected, not everyone made it out of “The Long Night” alive.

The third episode of Game of Thrones’ eighth season, “The Long Night,” promised an epic battle, and it delivered: The Battle of Winterfell was an intense fight, and of course not everyone made it out alive.

Who’s dead: A few fighters — but not as many as you feared

The Battle of Winterfell was dramatic and bloody, but it didn’t take out nearly as many of our favorite characters as we were dreading. Here’s who didn’t make it.

This one may be surprising given how indestructible Game of Thrones’ head ice zombie has seemed at many points throughout the show. But in “The Long Night,” he proved dazzlingly easy for consummate assassin Arya Stark to take out. In the episode’s climax and most thrilling moment, the character routinely described as Death walking discovered he wasn’t the only death god in the room.

Surprise! The Red Witch turned up just as the battle was starting in order to lend crucial aid to Team Living — and after the dust had settled, she chose to end her unnaturally extended life. We saw in season six that Melisandre was actually much older than she appeared, and that her power of immortality seemed to be contained in the mysterious red amulet she wore around her neck. Following the Battle of Winterfell, apparently sensing that her work was done and undoubtedly still feeling loads of guilt for the death of Shireen Baratheon, Melisandre calmly walked onto the battle plain, took off the amulet, and shuffled off this mortal coil.

In a death that surely surprised no one, Theon, who tasked himself with protecting Bran in the godswood, nobly sacrificed himself by charging the Night King in Bran’s defense. But Bran told him he was “a good man” first, so he died at peace.

Little Lady Lyanna died in classic defiant kid style — taking out a huge zombie ice giant. She then sadly (but dramatically!) came back briefly as an ice zombie herself.

Ser Jorah surely died living out his dearest fantasy: protecting his queen and the love of his life, Daenerys Targaryen, from a horde of wights. She, in turn, cried over him a lot in his final moments. Well done, mate.

After enjoying a few pleasant reunions before the battle, Beric, who once led the Brotherhood Without Banners and also wound up on Arya’s kill list for a stint, fought alongside Arya and the Hound until the bitter end, ultimately sacrificing himself to rescue Arya from a band of wights.

The former commander of the Night’s Watch remained loyal to his brothers even in the heat of battle, rescuing Samwell Tarly from a wight only to become wight-fodder himself seconds later, in the episode’s first gut-twisting farewell to a familiar character.

Dany’s former favorite sweet ride, Viserion, was killed and then revived last season as an undead ice dragon. But despite laying down some cool (pun intended) fire, he bit it when Arya’s dagger turned the Night King into shards.

Because the Dothraki hordes were on the front lines of the battle, they were all but wiped out. The Unsullied were next in line. Though most of the major characters (including Grey Worm) remained unharmed, for the nameless characters of color, “The Long Night” was a massive bloodbath, made even worse given that so many figures who were so crucial in forging Daenerys’s path to the Iron Throne seemed to be completely disposable in the end.

Who’s alive: Everybody else!

An astonishingly high number of characters survived this episode, from side characters that many fans had totally written off like Grey Worm to pretty much everyone in the Winterfell crypts — even though there was a brief Dead uprising there, too.

So here’s the much happier list of characters we know survived the battle:

Though he was pleasingly useless through most of the fight and had several extremely close calls, Jon still lived to see another episode.

Despite having a bafflingly terrible battle plan and winding up separated from her dragon and fighting for her life amid a crowd of wights, Dany made it out alive thanks to the bravery and sacrifice of her pal Ser Jorah.

Both Jaime and Brienne had a few close calls during the battle, but when the ice army shattered to pieces, they were still standing.

Game of Thrones’ erstwhile Arya Underfoot proved to be the key to the entire fight — and she’ll live to tell the tale.

Despite randomly warging away for like half an hour to follow the Night King around for no apparent reason, Bran came back to himself just in time to watch Theon die, say hi to the Night King — and then watch Arya ice the Night King, for real. Kid never even broke a sweat.

Though Sansa originally wanted to be where the fighting was, Arya ordered her to go hide in the crypts — which proved the safest place for her, in spite of the Dead rising there, too.

Tyrion was also in the crypts, where he got to spend a couple of lovely moments bonding with Sansa over how useless they both were in the battle — and while he was prepared to die protecting the others, in the end, he (thank goodness!) didn’t have to.

If you were one of the many Game of Thrones fans whose dearest wish going into the Battle of Winterfell was to see the Hound and Arya saving one another’s lives and fighting together like old pals before both walking away in one piece, this episode delivered. Though the Hound did freak out and nearly gave up at one point, watching Arya fight with all her might inspired him to dive back into the fray. Well done, Ser Sandor.

We barely got to see Gendry fight, but from what we did see, the dude can handle himself. It seems he came out of the battle with nary a scratch.

Davos was another character who barely got to see any action. He was standing tall as the ice melted.

Sam has come a long way, and despite his clear terror, he kept fighting bravely through the battle. Lucky for him, he also fought near several other much stronger soldiers, including Edd and Jorah, who saved his neck and later lost their own.

Gilly and her son waited it out with the others in the crypt, and was safe.

These two lovebirds both survived — Grey Worm managed to remain safe above ground, while Missandei stuck it out in the crypts.

The tiny and defiant bread line girl from the previous episode

We know you were wondering; yes, the cute kid who said she’d defend the crypts is also just fine — though she did wind up covered in blood, she’s unscathed.

Drogon suffered a hell of an attack from the wights during the battle, and retreated in order to literally shake off a cadre of wights and perhaps heal his wounds. But he didn’t seem to be too injured, and he was well enough to fly, so we’re calling him safe until we see evidence to the contrary. Rhaegal seemed to make it through totally uninjured.

Ghost showed up in the opening scenes of the episode, charging into battle alongside the Dothraki. But he then apparently peaced out along with Jorah and some of the other riders who returned. We’re pretty sure we’ll be seeing him again.

Correction: An earlier version of this story incorrectly identified the Hound as Gregor Clegane; the Hound is Sandor Clegane.

Pete Buttigieg wants reparations and citizenship for separated immigrant families
Richard Ford, who just won a prestigious literary award, once spat at Colson Whitehead
How to weigh the risk of going out in the coronavirus pandemic, in one chart
Several ex-intel officers criticized Trump. Now he may revoke their security clearances.
Bella Thorne and Whoopi Goldberg’s fight over nude photos is bigger than both of them
No matter what the Supreme Court decides, abortion opponents have already won