Who is Gritty, and why is he Donald Trump’s mortal enemy? 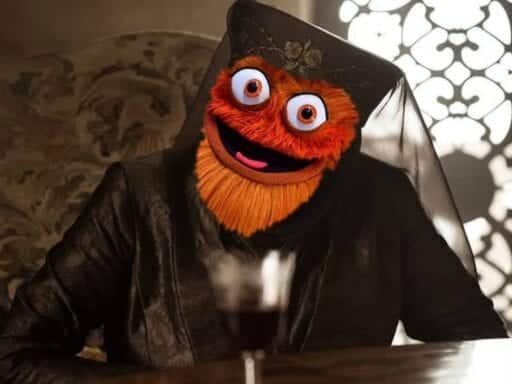 With Trump’s electoral hopes foundering on the shores of Philadelphia, the hockey mascot takes center stage.

Philadelphia — and I say this with great affection for a city I adore, where I have many friends and where I have had many amazing visits — is the city God coughed up.

Again, I mean that as a sort of compliment.

Scrappy and rough around the edges, Philadelphia is also central to the story of America’s founding. It’s the city of Benjamin Franklin and the Liberty Bell and Independence Hall. It’s also the city of Gritty, about as perfect a stand-in for a city as a sports mascot could possibly hope to be — and to be clear, Philadelphia is already home of the Phillie Phanatic (of baseball’s Philadelphia Phillies), so the city knows from good mascots.

Giant, orange, and furry with wild googly eyes, Gritty is the monster of Philly’s dreams. He reps the Philadelphia Flyers, the city’s NHL franchise, and when he debuted in 2018, he swiftly became a meme beloved by the internet’s many memesters, after a short early period where people were like, “The fuck is this???”

What’s more, Gritty was embraced by many leftists as an example of the chaotic good energy they hope to bring to the political conversation and/or world. As I wrote in 2018:

You can never quite predict when or how, but sometimes, these empty spaces open up in our collective subconscious, and something shows up to occupy them. Suddenly, a thing is there, and it fits the shape of a void you hadn’t previously noticed. You might characterize Gritty as gross or bizarre or horrible to behold. You might think he is fun meme material. You might admire him as a triumph of personal design smuggled into a corporate context. You might believe he is an advocate of the proletariat. He might be all of these things or none of these things.

But there is a chaos to Gritty that speaks to something in our culture right now. That chaos will be different for me than it is for you. But we are both feeling it, yes? Things weren’t supposed to be this way. But also, things don’t have to be this way.

Some of my favorite antifa gritty memes to celebrate PA going blue pic.twitter.com/JVLLT2KBN2

But even if Gritty is a monster who has been embraced by the world at large and the left in particular, he is Philly’s mascot at his core.

This is straight up the best explanation of @GrittyNHL I have ever seen. #Gritty pic.twitter.com/wcoIGWBrE6

Philadelphia has proven central to Joe Biden’s Electoral College victory in the state of Pennsylvania, which led to his victory in the presidency. What’s more, Biden is a Democrat, and the American left has mostly united behind him in the name of defeating Donald Trump. (Whether that alliance will hold in the years ahead remains to be seen.)

So, yeah, Gritty memes are back, baby.

The person who created this, is right up there with Michaelangelo. pic.twitter.com/WoyYux2QfF

The above meme — which blends Gritty with the Game of Thrones character Olenna Tyrell, who uses her last moments alive to let one character know she was behind the murder of another — was created by Facebook user Courtney Griffiths (a Californian living in London, per Insider) and has become the perfect example of the idea that Gritty himself, in all his Philadelphia freedom, ended the reign of Donald Trump.

Predictably, the Gritty memes and Twitter jokes did not stop there (though the Game of Thrones example is by far the most popular).

If PA flips first Gritty should be allowed to personally drag Trump from the White House and throw him directly into hell.

by law this means gritty is commerce secretary

And more than a few of the memes leaned into Philadelphia’s reputation for being a city full of scrappers:

“Fuck around and Find Out”
-Philly pic.twitter.com/Oci4itGBWO

Did Gritty save democracy, as these memes might suggest? Of course not. The media’s tendency to treat election coverage as a horse race creates the false idea that Biden “came from behind” to win, when the truth is that Philadelphia’s votes just took longer to count than votes in other parts of Pennsylvania, because it has so many more votes.

But you know what? I’m going to give Philly this one. Congrats to Gritty, a new American revolutionary.

Abortion bans criminalize doctors. For black physicians, the risks are even higher.
“Donald Trump is the greatest threat to election integrity”
Love — and sex — in the time of coronavirus
Top Trump official reportedly said Ted Cruz has a likability problem that could cost him his Senate ...
Watch: Coronavirus is not the flu. It’s worse.
This week in TikTok: Why is everyone so mad at Charli D’Amelio?