Who will win all of Tuesday’s primaries, according to the polls 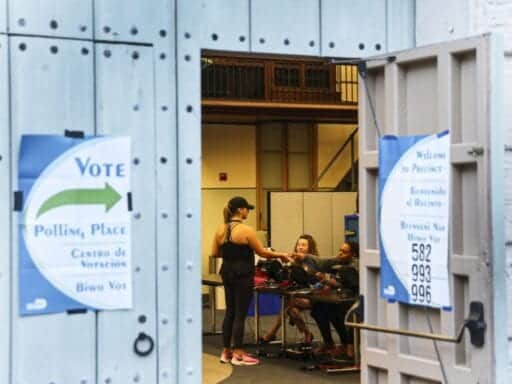 Sen. Bernie Sanders is looking to make a comeback in Illinois, Florida, and Arizona primaries Tuesday. But the polls suggest that will be difficult.

Three more states — Illinois, Florida, and Arizona — will vote in the 2020 Democratic primary Tuesday. And even with possibly depressed turnout due to coronavirus, the results don’t seem hard to predict.

According to the polls, former Vice President Joe Biden will likely win all of the day’s contests.

He would have likely notched another victory, were it not for the pandemic: Ohio was scheduled to vote, but it has delayed its primary to comply with White House guidance that there be no gatherings of more than 10 people in order to limit the spread of the coronavirus.

The other three states have said that voting will continue, despite poll workers quitting in Illinois, leading to a worker shortage, and 78 polling sites closing in Arizona due to concerns about viral spread and a lack of sanitation.

All this means there may be depressed turnout, but there is little question about whether Biden will win each of the remaining states.

What is at question, however, is whether Sen. Bernie Sanders will be able to perform well enough to stay in the race. The senator won the most recent contest — Saturday’s Mariana Islands caucuses — but has struggled to narrow Biden’s pledged delegate lead on him, and failed to stake out the sort of large-margin wins that would have allowed him to do so during the last big day of voting on March 10.

To remain a viable candidate, Sanders would need to either pick up major surprise wins, or, at the very least least, tie Biden in nearly every state Tuesday. And the polls suggest doing so will be very, very difficult.

Biden is far and away the leader in national polling — his RealClearPolitics polling average puts his national support at 56.4 percent, and Sanders’s at 33.2 percent. Rep. Tulsi Gabbard, the third and final candidate left in the Democratic race, is polling at an average of 3.2 percent — it would be all but impossible for her to become the nominee.

Polling in the three states voting Tuesday reflects this trend — the contest that is the closest is the Arizona race, and there, a Monmouth University poll of 373 likely primary voters taken from March 11-14 found Biden to have 20 percentage point lead on Sanders (a lead protected by the poll’s 5.1 percentage point margin of error).

Given Democratic Party rules require delegates to be split proportionally based on vote share (for all candidates clearing a 15 percent threshold either statewide, in congressional districts, or both) should Arizona see a result similar to this poll, Biden would receive slightly more of Arizona’s 67 pledged delegates than Sanders.

Those 67 won’t change the course of the race. But taken together with those of the other states voting Tuesday, they could help Biden seal the nomination.

Particularly in Florida, where there are 219 delegates at stake, Sanders will have to work hard to limit his losses in order to maintain any feasible path to becoming the Democratic Party’s presidential nominee.

Florida is Tuesday’s most delegate-rich state

In order to win the nomination without the intervention of superdelegates, a candidate needs to win 1,991 pledged delegates — the majority of the 3,979 available during the primary season.

So far, Biden has won 866 pledged delegates and Sanders has 709, according to our partners at Decision Desk and the Virginia Center for Politics, meaning both have more than 1,000 to go to become the nominee on the first ballot.

There are 441 pledged delegates on offer Tuesday, and most of those come from Florida, where Sanders and Biden will be competing for 219 delegates.

The latest Florida polls show Biden has a strong advantage in the state; a Swayable online poll taken March 16 of 4,035 likely voters found Biden’s support to be at 63.5 percent, and Sanders to have 24.9 percent support. The poll has a 2 percentage point margin of error, making Biden’s lead incredibly secure.

The polls suggest Biden will win Florida, that he will win by a very large margin, and that he is poised to take home far more delegates than Sanders. He has had some decisive victories in recent contests, particularly in states in which the Democratic electorate is older, more moderate, and more heavily black. The demographics of Florida — though different than the belt of southern states he’s won over the last two weeks — also favor him.

For instance, CNN exit polls from the 2016 Democratic primary found the 54 percent of the electorate to be above the age of 50. There are fewer black voters in the Democratic electorate than in states like Mississippi — where Biden recently won 81 percent of the vote — but it is 27 percent black.

Latino voters make up 20 percent of the electorate, a fact that would seem to benefit Sanders, who has worked hard throughout the primary to build his Latinx base of support — and effort that paid dividends for the senator in both Nevada and California. However, much of Florida’s Latinx Democratic electorate is different than in those states, as Vox’s Nicole Narea has explained:

Whereas Mexican Americans made up the vast majority of Latino voters in those previous contests, Florida’s Latinos are primarily Cuban, Puerto Rican, and Venezuelan, and they have different political preferences.

Despite being at a disadvantage demographically, it is possible that Sanders could limit Biden’s delegate haul among the state’s 143 pledged delegates awarded at the congressional level with wins in more progressive districts.

And there also is a question as to whether turnout among these demographics that tend to back Biden will be depressed due to coronavirus concerns, a situation that could also benefit Sanders.

But given his polling in Illinois, even a middling finish in Florida could give Biden a delegate lead that would be all but impossible for Sanders to conquer.

Together, Illinois and Florida could give Biden a clear path to the nomination

Before Ohio postponed its primary, Biden was on track to win there; his RealClearPolitics polling average put him 22.5 percentage points ahead of Sanders, and a Swayable poll taken March 16 gave him an even stronger advantage: a 42 percentage point lead (with a 3 percentage point margin of error).

That polling — and the fact that Ohio has 136 pledged delegates — meant Biden could count on increasing his overall delegate lead on Sanders by adding a large number of Ohio delegates to his Florida haul.

He will no longer be able to do so, a reality that would seem to give Sanders a bit more space to try to reverse his fortunes.

But complicating that opportunity is Illinois, and its 155 pledged delegates.

As is the case in Florida, then, Biden is in position to have a dominant performance in Illinois. And although voter turnout could be depressed there, the state has seen record vote-by-mail participation — Chicago, for instance, broke its World War II record for mail-in ballot requests, and Cook County, which contains Chicago, has recorded more than 160,000 early votes at its polling sites. What polling we have from that early voting period shows a strong preference for Biden, suggesting the majority of those who did vote early likely voted for him.

If he were to receive just 60 percent of the delegates in each state, Biden would receive 74 more Florida and Illinois delegates than Sanders, expanding his current 157 delegate lead on the senator to 231 — any advantage Biden picked up in Arizona, be it 10 or 20 delegates, would only make that lead more difficult for Sanders to combat.

A delegate lead of say, 250, would not be mathematically impossible for Sanders to overcome. But what makes doing so difficult is that, after Tuesday, there are only a few more delegate rich primaries — and many of these, like Georgia and Pennsylvania, favor Biden.

Just how Sanders might conjure up huge victories in the few remaining delegate heavy states that is unclear — Biden has far more momentum, having racked up wins, delegates, and endorsements in recent weeks. And the former vice president will only have more momentum and a greater aura of inevitability around him after Tuesday’s wins. Which means Sanders, should he chose to work towards surprise victories in the states to come, will likely have to do so among growing calls to suspend his campaign.

Americans are torn on whether to remove Trump, according to the polls
Many technologies needed to solve the climate crisis are nowhere near ready
Israel’s hugely controversial “nation-state” law, explained
Raven Leilani’s wickedly smart Luster is the Vox Book Club’s February pick
Facebook bans QAnon (again)
Welcome to the world of craft weed