Why 150,000 people are calling for Netflix to cancel the teen comedy Insatiable before it debuts 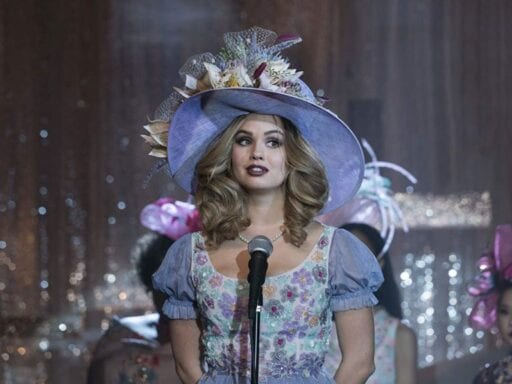 While only a trailer has dropped so far, many are calling out the premise of the show for its perceived fatphobia.

The first 30 seconds of the trailer for Insatiable, a new comedy series coming to Netflix on August 10, introduces the story of a chubby high schooler grappling with bullies, unrequited crushes, and the FOMO that comes from nights spent on the couch eating ice cream.

It’s all a fairly standard setup for what looks to be a show about modern teens — perhaps even one that, like Bo Burnham’s Eighth Grade, is benefitted by the fact that its lead looks more like an average high schooler than the glamorous 20-something stars of shows like Riverdale.

But then the trailer takes a turn. Patty, our main character, gets punched in the face, has her jaw wired shut for months, and thereby loses so much weight that by the time she goes back to school in the fall, she’s a bonafide (thin) hottie. It’s with this newfound power that she can apparently get her revenge on the kids who’d excluded her in the past.

Because no one has officially reviewed the show yet, the trailer is all that we have to determine what the rest of Insatiable will look like and what themes it will deal with. But based on that one minute and 30 seconds, the reaction has been … not great.

Critics on Twitter and elsewhere have called the premise of the show fatphobic, triggering to people with eating disorders, and a regressive lens through which to view fat people’s stories. The Good Place star Jameela Jamil, who has advocated for body autonomy in the past, tweeted about how there’s a problem with implying that the only way to “win” in life is to diet:

Kids who bully are just miserable, badly raised arseholes. It is not, and should not ever be YOUR problem that they have a problem with you. You don’t have to conform. You don’t have to placate. Revenge isn’t a good use of your time and energy. And starving yourself is

Writer Roxane Gay also noted the trailer’s flawed logic that fat women can’t stand up for themselves and must undergo physical trauma to become their best, skinny selves:

Ahhh yes, a fat girl could never stand up for herself while fat and of course she has to be assaulted and have her mouth wired shut before she becomes her best self, her skinny self. Good to know!

There’s now even a Change.org petition that, as of publication, has garnered more than 145,000 signatures to stop Netflix from airing the show, on the grounds that releasing it will be damaging to young girls’ self-esteem and cause or trigger eating disorders.

One day after the trailer premiered, on July 20, Insatiable’s writer and producer Lauren Gussis defended the show against critics, writing that the inspiration was based on her own experience with an eating disorder as a teenager, and that comedy is a means of dealing with our vulnerabilities.

This is my truth. @insatiable_ pic.twitter.com/xbs3YtueCQ

Star Debby Ryan, a former Disney Channel actress, took to Instagram to defend the show, writing that it was a satirical look at “how difficult and scary it can be to go to move through the world in a body,” and assured viewers that the humor is “not in the fat-shaming.” Alyssa Milano, who also appears in the trailer, said in a 30-minute Twitter video that she “totally gets” the backlash to the trailer, but hopes people will wait to see the full show before judging it.

This, above all, is what the creators and stars are attempting to communicate. But for people who are so accustomed to seeing their stories told onscreen via the same harmful tropes, the Insatiable trailer could be seen as just another exhausting example of the negative ways TV and movies portray fat people.

To understand why the Insatiable trailer hit such a nerve, you have to look at pop culture’s terrible track record of telling fat people’s stories.

On July 23, artist and writer Kiva Bay asked his Twitter followers to name the fat-hating moment in media that has stuck with them, starting with the scene in Harry Potter and the Chamber of Secrets when Aunt Marge inflates to such great proportions that she literally floats away.

Responses ranged from Bridget Jones being consistently described as fat (in the books, she weighs 130 pounds) to pretty much the entire premise of Pixar’s Wall-E, which depicts a futuristic dystopia in which everyone isn’t just overweight, but share the negative characteristics associated with being overweight: that they are lazy and stupid, and that all they care about is passively consuming whatever’s in front of them.

The problem persists even in media that’s often held up as progressive — many people in the thread called out Brooklyn Nine-Nine and Parks & Recreation’s recurring fat jokes, while others brought up the inherent fatphobia of shows like Gilmore Girls and 30 Rock in which objectively thin main characters have an obsession with unhealthy food.

A 2009 Jezebel piece described the “skinny glutton” phenomenon as “a sure indicator to the audience that these women are Single, Quirky and, (because they’re thin, only gently) Sad” because casting an actually fat actor in the role would, the thinking goes, be too pathetic.

The Insatiable trailer also reprises an especially troubling Hollywood practice: the fat suit. When a character actually is meant to be fat, instead of casting a bigger actor in the role, often a thin actor will wear a fat suit.

We tend to see them used in flashbacks to a time when a now-thin character was fat, like Monica in Friends, Schmidt in New Girl, or Ryan Reynolds in Just Friends. The “humor” comes not only from seeing actors wearing a silly costume, like Eddie Murphy in Norbit or The Nutty Professor, but also from the ability to crack jokes at a past character’s fatness with the knowledge that the present character is laughing now, too.

Few uses of fat suits, however, are more controversial than the 2001 film Shallow Hal, in which Jack Black plays a man who has to be hypnotized to find Gwyneth Paltrow in a fat suit sexy enough to be his girlfriend. Not only is the entire premise pretty gross, but, as a Telegraph piece noted after comparisons were drawn to the recent Amy Schumer film I Feel Pretty, the movie consistently uses fat bodies as punchlines:

“The camera linger[s] over every dimple and crease on the physical form of Ivy Snitzer, Paltrow’s body double, and contrasting the sight of Paltrow in revealing booty-shorts with a large woman spilling out of her clothes. Jokes are endlessly made about her appetite, while every chair Rosemary sits on appears perilously close to collapsing (it’s a sight-gag that is repeated twice on-screen, along with a deleted scene involving a caved-in bed).”

That contrast — the visual of the character wearing a fat suit versus the character without it — can have the effect of implying that fatness, when constantly compared to the superior thinness, is grotesque and deserves to be laughed at.

That’s the history Insatiable is drawing on when it puts Debby Ryan in a fat suit, regardless of intention.

And there is yet another pattern that Insatiable seems to fall into: the idea that weight loss is the road to happiness. Friends’ Monica and New Girl’s Schmidt are both characters who don’t accomplish their goals until they lose weight. The entire wellness industry is based around this false promise — that losing weight is the key to getting whatever you’ve always wanted, whether that’s love, money, or revenge. (See: Khloe Kardashian’s extremely on-the-nose reality series, Revenge Body.)

In an essay for Medium titled “To the writers of Insatiable,” fat activist and writer Your Fat Friend wrote about the problem with this narrative, pointing out that not only do 97 percent of dieters gain back what little weight they lose (or more), but that weight loss is often the only narrative that fat people get to have.

In short, fat characters are defined entirely by their fatness, and only get to become multi-dimensional once they lose the weight. It’s a trope that the Insatiable trailer even touches on in a meta way: When Patty returns to school, newly thin, she muses, “Now I could be the former fatty who turned into a brain, or an athlete, or a princess,” as if these character traits can’t apply to fat people because their main identifier is already “fat.” Until we see the show, it isn’t clear where this strain of self-awareness’s endpoint lies, or how far the series will take its meta-understanding of fat tropes, but it could be a promising sign.

So yes, the Insatiable trailer, as of right now, is still just a trailer; there’s still a whole show to come and be watched and discussed, starting on August 10. But many viewers are worried that the groundwork seems to be laid for a series about the same stories of fat people we’ve seen thousands of times over.

Will young women of color shape the Democratic Party?
Social media is making a bad political situation worse
The two-party system is killing our democracy
The DNC is a reminder that America is a big, diverse country, racked by disaster
Syria has confirmed its first cases of coronavirus. An outbreak there would be hell.
Hispanic voters helped decide the election — and not just in Miami-Dade