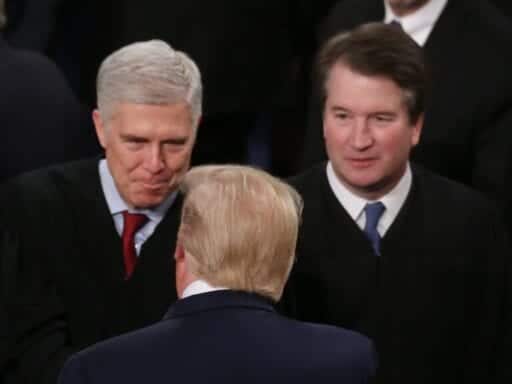 Roberts’s 5-4 decision is a loss for the religious right and a victory for public health.

Late Friday night, the Supreme Court handed down a 5-4 decision establishing that states still have some power to regulate how many people are allowed to gather in churches during a deadly pandemic.

The case, South Bay United Pentecostal Church v. Newsom, began on May 11, when a California church sought a lower court order allowing it to hold in-person services, despite a state order requiring places of worship to hold services online to avoid spreading the coronavirus. While the case was pending before the Supreme Court, however, California relaxed its order to allow such in-person services, so long as the number of attendees did not exceed 25 percent of the building capacity or 100 worshipers.

That relaxation did not put an end to the case, however. The church still sought a broad order exempting it from much of the state’s power to regulate public health.

The general rule when a state is accused of abridging “religious liberty” is that churches and other religious institutions may be subjected to the same laws as everyone else, but they cannot be singled out for inferior treatment. Churches must comply with the fire code, follow most labor laws, obey the criminal law, and so forth. As the Supreme Court explained in Employment Division v. Smith (1990), people of faith must still obey “neutral” state laws of “general applicability.”

Under that rule, California’s public health order is constitutional. Indeed, if anything, places of worship receive superior treatment to similar institutions in California.

As the public health crisis diminishes, California plans to open up businesses and other institutions in four stages. Currently, the state is in “Stage 2,” which allows retail businesses and many workplaces to reopen, albeit with restrictions. Places of worship were originally grouped with movie theaters, and other places where medium-sized groups of people gather in auditorium-like settings, in Stage 3. The largest gatherings, such as live concerts and sporting events, may not reopen until Stage 4.

Yet, while South Bay United was pending, the state modified its order to allow places of worship to open at limited capacity, even though theaters and the like may not do the same. Thus, as Roberts writes in his opinion, “although California’s guidelines place restrictions on places of worship, those restrictions appear consistent with the Free Exercise Clause of the First Amendment.”

All four of the Court’s most conservative members dissented in South Bay United, and three of those justices joined an opinion by Justice Brett Kavanaugh that would make it quite difficult for states to regulate potentially dangerous conduct by religious institutions. (Justice Samuel Alito dissented, but he neither joined Kavanaugh’s opinion nor wrote his own opinion explaining why he disagrees with the majority.)

The thrust of Kavanaugh’s opinion is that, except in rare circumstances, a state may not impose restrictions on churches that it doesn’t impose on any business. “The basic constitutional problem,” Kavanaugh writes, “is that comparable secular businesses are not subject to a 25% occupancy cap, including factories, offices, supermarkets, restaurants, retail stores, pharmacies, shopping malls, pet grooming shops, bookstores, florists, hair salons, and cannabis dispensaries.”

Kavanaugh, in other words, wouldn’t allow states to make reasonable distinctions between churches and other places of business based on the kind of activity that goes on in that business — and whether that activity is likely to spread the coronavirus. As one lawyer quipped about Kavanaugh’s opinion on Twitter, “does Justice Kavanaugh really think 100+ people hang out in marijuana dispensaries for a few hours together and sing?”

Had Kavanaugh’s views prevailed, they would have imposed severe limits on the state’s ability to prevent coronavirus from spreading in places of worship. If there is a sudden outbreak of the virus in California, and the state decides to close all businesses except for grocery stores, Kavanaugh’s opinion suggests that the state may not impose any restrictions on churches that it doesn’t also impose on grocers — even though people will starve if they can’t buy food.

Nevertheless, the fact that Kavanaugh wound up in dissent is significant, not just because of the public health implications, but because it suggests that Roberts might break with his fellow Republicans in future “religious liberty” cases. The Court, for example, plans to hear Fulton v. City of Philadelphia in the fall — a case asking whether religious organizations have a constitutional right to defy Philadelphia’s ban on anti-LGBTQ discrimination by government contractors.

Among other things, the plaintiffs in Fulton ask the Supreme Court to overrule Smith and give religious objectors an exceedingly broad power to defy laws that they disagree with on religious grounds. But Roberts’s vote in South Bay United suggests, at the very least, he recognizes that the Court must not afford so much special solicitude to religious conservatives that it endangers public health.

Mr. Peanut’s death and Baby Peanut’s birth, explained
Trump’s policies at the border weren’t designed to keep out Mexican asylum seekers — until now
Kathleen Turner dragged a high-paid actress for having no range. Here’s who it might be.
The FDA has authorized the first Covid-19 vaccine in the US
Amazon starts selling prescription drugs, with two-day delivery for Prime members
Justice Department now says its email accounts were “potentially accessed” in Russia hack