Why a robot pizza startup could be worth $4 billion 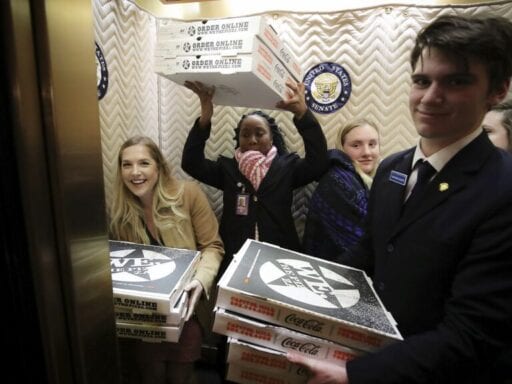 Zume Pizza is a Silicon Valley punchline, but investors are pouring millions into it.

You wouldn’t be the first person to roll your eyes if told that a Silicon Valley startup that uses robots to make pizza is worth almost $2 billion.

Nor would you be the first person to question aloud how that same startup, a year later, could soon double in valuation.

But indeed, Recode has learned that this startup, Zume Inc., is in talks with investors to be valued at about $4 billion in a new round of fundraising, according to people familiar with the matter. One part of the story that isn’t so surprising: One of Zume’s biggest investors is SoftBank, the controversial investor behind WeWork and Uber that has become emblematic of Silicon Valley’s excesses. SoftBank pumped $375 million into Zume just last year.

SoftBank is expected to back Zume in this round of financing but not to lead the round. The fundraising could also involve Zume taking out some debt in addition to raising money by selling equity in the company as startups traditionally do, sources say. The exact amount of money that Zume will raise hasn’t yet been determined.

Even investors in Zume are aware that, to some, the company has become an easy shorthand for tech insiders looking to portray an industry untethered from reality. Zume feels ripped straight from an episode of HBO’s Silicon Valley. And as a new wave of scrutiny falls upon every SoftBank portfolio company amid the failed IPO of WeWork and Uber’s struggles on the stock market, it shouldn’t be a surprise that some detractors see Zume as a case in point for SoftBank’s delusion.

But to Zume’s fans, just because it is easy to mock doesn’t mean there isn’t an opportunity there. For starters, preparing and delivering pizza pies made by robots to Silicon Valley diners isn’t even Zume’s main business anymore. The four-year-old company has largely pivoted to an enterprise model where it works with restaurants that have no storefront and prepare their food in shared centralized kitchens, or “cloud kitchens”; with delivery providers like DoorDash and Postmates; and with existing pizza companies to build a hub-and-spoke model for the entire delivery industry. The company has been trying to morph into a data and logistics provider, part of an effort by founder Alex Garden to become “the Amazon of food.”

That pivot is not widely understood by the jokesters, who wonder how Zume can compete with the Pizza Huts and Domino’s of the world in the $10 billion pizza-delivery industry. The food-delivery sector is riddled with sky-high customer acquisition costs, given weak consumer loyalty and rampant subsidies made possible by venture capital.

Pizza Hut offers an instructive example. Rather than trying to compete with pizza delivery companies for the order-out budget of a family in Palo Alto, Zume announced last month that it would start a pilot project to supply Pizza Hut with circular, compostable pizza boxes, part of its attempt to play in the packaged goods industry.

Or here’s another example: The Washington, DC-based fast-casual chain &pizza is using Zume’s food trucks to cook and deliver its own pizzas.

“Today it costs hundreds of thousands of dollars and takes a year, sometimes more, to open up a brick-and-mortar store, but by leveraging our infrastructure, they can open a new market in a matter of weeks — and they can do it with a flexible financial model,” Garden said in an interview earlier this fall.

Given that Zume is trying to partner with existing food providers, its role could make sense within SoftBank’s portfolio, which includes several of the leading food-delivery companies across the globe, such as Uber. Other Zume investors include tech billionaire John Doerr, who backed it personally rather than through his VC firm Kleiner Perkins.

That being said, Zume has a long way to go until it grows into its valuation. It loses about $50 million a year, according to a source close to the company, although SoftBank’s deep pockets help. Zume still has most of the $375 million it raised from the firm in the bank, sources say.

Coronavirus: News and updates on new cases and its spread
These AI-generated coronavirus memes are better than human-generated ones
WeWork confirmed layoffs at an internal meeting but still hasn’t said how many or when
How mocking anti-Semitism got a Trump official falsely accused of actual anti-Semitism
Why Trump is an easy mark for Putin
The Covid-19 risks for different age groups, explained

WandaVision is at its best when it gets weird