Why a Senate vote on stimulus has failed, again 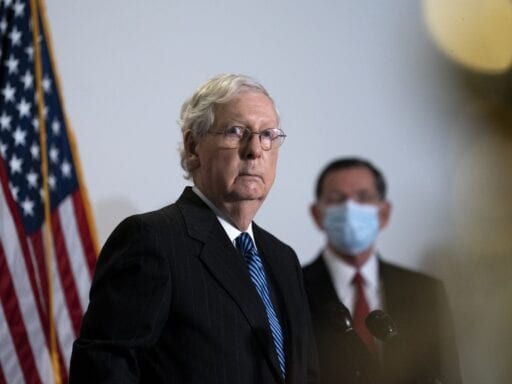 Senate Republicans put forward their own stimulus bill — following Mitch McConnell’s attempts to block a compromise ahead of the election.

Another Senate vote on a pandemic stimulus bill has failed.

The Wednesday vote on the Republican crafted bill, which included about $500 billion in aid, ended up breaking along party lines, 51-44, and falling short of the 60 votes needed for the legislation to advance. Republicans, broadly, supported moving ahead with the legislation while Democrats did not.

This legislation was not the product of any deal between the two parties’ lawmakers, so this outcome was expected. Rather, it was the latest version of a narrow bill that Senate Republicans have offered to demonstrate that they are working on stimulus — and to argue that Democrats are the ones obstructing its progress for voting it down. Senate Minority Leader Chuck Schumer earlier this week dubbed the vote a “stunt.”

Senate Majority Leader MitchMcConnell, meanwhile, has argued that “Democratic leaders have spent months holding out for a long far-left wish list of non-Covid-related priorities and obstructing any additional aid until they get it.”

In reality, Senate Republicans are the ones who could be the roadblock to a deal: As Democrats and the White House have engaged in negotiations, McConnell has been far less involved — while repeatedly emphasizing that many of his members aren’t interested in more comprehensive aid. And even as he’s put a narrower Republican bill on the floor, he’s actively discouraged a compromise option.

This week, McConnell made his own opposition to a White House-Democratic deal explicit: He told Senate Republicans that he’s urged the White House not to make a deal with House Speaker Nancy Pelosi prior to the election, the New York Times reports. GOP members, including Sens. Ted Cruz (R-TX) and Ben Sasse (R-NE), are among those who’ve repeatedly said they can’t accept the larger bill Pelosi has advocated for. McConnell, too, has expressed concerns about a vote on a stimulus deal interfering with the time table for the confirmation of Supreme Court nominee Amy Coney Barrett, the Times reports.

The bill that Senate Republicans put on the floor this week was much less generous than what Democrats and Treasury Secretary Steven Mnuchin, who is leading negotiations for the White House, have been discussing. The $500 billion covers funding for expanded unemployment insurance, school reopenings, and coronavirus testing — but does not include another round of stimulus checks or state and local support. McConnell also scheduled a Tuesday vote on a measure aimed at bolstering the Paycheck Protection Program — which is intended to help small businesses. (That vote failed as well.)

Republicans used Wednesday’s vote mainly to prove a point — much like they did with a previous September vote on a “skinny” stimulus package. Ahead of November’s elections, this vote will give vulnerable lawmakers something to point toward as evidence that the GOP is focused on helping people weather the ongoing economic devastation of the pandemic, despite the party’s ongoing refusals to consider the broad stimulus packages that have been passed by Democrats in the House of Representatives.

As has been the case for months, there is no deal on stimulus. There are, however, several competing efforts to try to address it.

House Democrats have said they want a more comprehensive measure that closely resembles the revised HEROES Act that was passed in October, which included $2.2 trillion in funding. The White House’s most recent offer called for $1.8 trillion, though Trump — a notoriously unreliable dealmaker — has urged negotiators to go bigger of late. Senate Republicans, meanwhile, have not been eager to approve a larger bill.

Currently, Pelosi and Mnuchin have signaled that they could reach an agreement this week, but there’s no guarantee they will actually do so, given how many conflicts there have been in their discussions up to this point. If they do get a compromise, there’s another open question of how Senate Republicans would handle it, since McConnell has already expressed his misgivings. Previously, he’s said the Senate would “consider” a coronavirus deal if one was reached — but he’s been unclear about the timing on a potential vote.

And even if Pelosi and Mnuchin’s coronavirus deal were to get a Senate vote, it might not receive the 60 votes it needs to pass. Because of the current breakdown in the upper chamber, Democrats would need 13 Republicans to cross over and support the agreement in order for it to pass the Senate, something that is not guaranteed.

There’s also the political backdrop of the 2020 election: If the Senate shoots down a deal, that could have negative implications for vulnerable Republican lawmakers, particularly those in need of support from independent voters. However, if a deal were to pass the Senate, Pelosi could also be viewed as handing Trump a win shortly ahead of November 3 — which could give the president a possible boost.

As Congress and the White House continue to wrestle with these dynamics — and what a deal looks like — millions of Americans are continuing to navigate unemployment, evictions and business closures as the economic fallout from the pandemic continues.

Even Senate Republicans want the White House to share a whistleblower report on Trump
2 winners and 4 losers from Trump’s 2020 reelection campaign launch
NYTimes report shows how Twitter, McKinsey were complicit in helping Saudi Arabia silence critics
Nunes keeps referring to the impeachment hearing as a “drug deal.” It’s not as clever as he thinks.
What is the point of dating now?
Why movies about public servants are so soothing in 2020