Why Alaska Natives pushed Sen. Lisa Murkowski to say no to Brett Kavanaugh 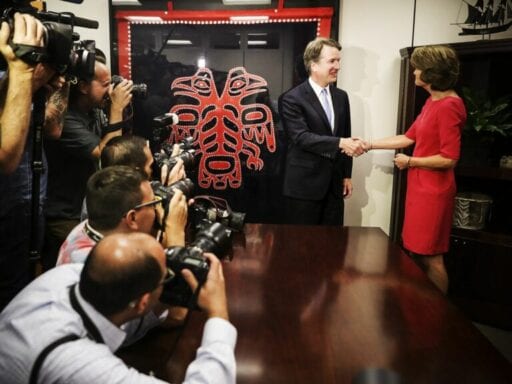 Even before the sexual assault allegations against Supreme Court nominee Brett Kavanaugh emerged, Alaska Native groups were pressuring Republican Sen. Lisa Murkowski, a key swing vote, to reject his nomination. “She heard our concerns about Judge Kavanaugh’s record on the constitutional rights of Native peoples,” the Alaska Federation of Natives, a powerful lobbying bloc representing 186 federally recognized tribes in Alaska, wrote in a press release on Friday.

And after Christine Blasey Ford came forward with her accusation that Kavanaugh assaulted her at a party in the 1980s, some indigenous Alaskans redoubled their opposition.

Alaska’s indigenous tribes are an indispensable base for Murkowski, helping her win a write-in campaign for Senate in 2010 after she lost the Republican primary. And the sexual assault allegations against Kavanaugh raised new alarm among many members. Alaska has the highest rate of sexual assault in the United States, more than double the national average. About half of assault victims are Natives.

Before Murkowski announced her intention to vote “no” on Kavanaugh, women from Alaska, including Alaska Natives, met with the senator this week to urge her to reject his nomination.

The Alaskans are here to fight!! #100AKWomen have come to DC to remind @lisamurkowski that Kavanaugh is NO GOOD for our rights, let alone our country. #StopKavanagh #CancelKavanaugh #BrettLies pic.twitter.com/mRuv9won1G

Many indigenous communities in Alaska opposed Kavanaugh from the outset of his nomination because of his past statements questioning federal rights and protections for Hawaiian Natives, raising alarm about potential rulings affecting Alaskan tribes. This was a concern Hawaii Sen. Mazie Hirono also raised during Kavanaugh’s confirmation hearing.

Brett Kavanaugh penned another op-ed for the @WSJ. Here’s one he wrote in 1999 in which he questioned whether Native Hawaiians were indigenous and deserving of similar rights as American Indian tribes https://t.co/TjqFOLnSYE … pic.twitter.com/mJwsl8Zh0f

The Alaska Federation of Natives formally came out against Kavanaugh’s nomination in September.

Native American sovereignty ties into sexual assault as well. According to the National Institute of Justice, most of the sexual violence perpetrated against Native women is by non-Native men. Due to the complicated web of federal, state, and tribal jurisdictions, these crimes have proved difficult to prosecute. Until recently, many tribal governments lacked the authority to level charges of sexual violence against non-Natives, even for crimes conducted in their territories.

“Being raised in the Alaskan Native community in my age group, I’m in my seventies, we were taught not to tell about sexual assault,” Adeline Raboth of Fairbanks, Alaska, said at a press conference, according to Rewire News. “Most of the time we would be blamed for being provocative in some way. So I can understand why someone would wait years to bring up a sexual assault.”

Senator @lisamurkowski has voted no on advancing the Supreme Court nomination of Brett Kavanaugh.

For Alaska Natives, that’s meant that many sexual assault crimes weren’t prosecuted at all, according to Amnesty International.

But Murkowski’s “no” won’t mean much now that Sen. Susan Collins (R-ME) and Sen. Joe Manchin (D-WV) announced their intentions to vote in favor of Kavanaugh’s nomination, making his appointment to the Supreme Court nearly certain.

Google and Amazon are now in the oil business
Rudy Giuliani’s fixers for the Ukraine caper just got arrested
How “Karen” became a watchword for racism
3 Hong Kong pro-democracy icons were sentenced to prison in huge blow to protest movement
I’m a geophysicist. My signature fieldwork uniform is bright pink.
Poll: Many Americans won’t venture into public despite businesses reopening