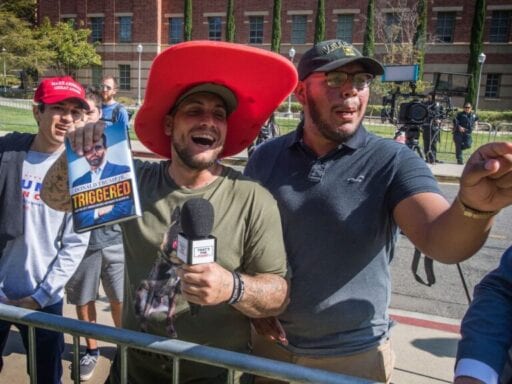 Share
Loading...
Supporters of President Trump yell at counter protesters outside a book promotion by Donald Trump Jr. at the UCLA campus in Westwood, California, on November 10, 2019. | Mark Ralston/AFP/Getty Images

The “Groyper Army” and the war over college campus conservatism, explained.

A group of alt-right and “dissident right” activists have joined forces with neo-Nazis and others on the far-right fringes to attack conservatives who they feel aren’t true conservatives, both online and in person.

Sunday, for instance, members of this group heckled Donald Trump Jr. at an event in California. And conservative speakers have been beset by the “groypers” at events in Texas, Tennessee and Arizona as well.

This group, which calls itself the “groyper army” — “groyper” being a reference to a meme of Pepe the Frog, itself a meme overtaken by the alt-right — purports to be supporting “traditional values” within conservatism, like immigration restrictionism. And it argues that relatively mainstream conservative student groups like Turning Point USA need to be confronted because they are shutting down “socially conservative Christians and supporters of President Trump’s agenda” and promoting “degeneracy” by having gay speakers.

Beyond the sort of heckling Trump faced, the network’s tactics usually focus on asking speakers specific and very leading questions about Israel, immigration, and LGBTQ issues within conservatism, hoping to elicit answers that reveal the speaker’s “fake conservatism.” “Real conservatism” being defined essentially as an emphasis on ethnic and racial characteristics as determinants for immigration coupled with an isolationist foreign policy and a “traditional” stance on LGBTQ issues. These tactics have gotten support from some mainstream right-leaning pundits who advocate for extreme restrictions on immigration, like Michelle Malkin.

In reality, the “groyper army” is simply the alt-right of 2016 and 2017, warmed over, reenergized and using new terminology aimed at disassociating itself from the “optics” problem caused by the tremendous failure of 2017’s Unite the Right Rally, which ended in the murder of a young woman. Its leaders and advocates are racists and Holocaust deniers, its message boards wax rhapsodic about the man who perpetrated the Christchurch mass shooting, and the questions it presents to conservative speakers are based on anti-Semitic conspiracy theories and “white genocide” fears.

As one source told me after a Turning Point USA event beset by “groypers,” “I did not know there were this many racists out there.”

The groyper army at work

Audience: We want to ask questions
TPUSA: Have sex incel

This will end well. pic.twitter.com/DrXlVyjIsk

According to a source, the former event was intended to be a brief interview conducted by Kirk, followed by a book signing of Trump Jr.’s new book Triggered.

But the groyper army, which made up roughly a third of the audience, overwhelmed Trump, Jr. and Trump campaign senior adviser Kimberly Guilfoyle, screaming loudly and demanding a Q&A session (The video above was from the Twitter account of a “groyper army” supporter.)

Rep. Dan Crenshaw was another target of the groyper army this weekend. At an event at Arizona State titled “Prove Me Wrong ft. Congressman Dan Crenshaw,” at which Crenshaw answered questions from an audience, Crenshaw was asked a series of questions which he later told me by email were “almost exclusively about Israel.”

Crenshaw is at ASU and right away:

“The basic nature of their questions was to ask a question that at first seems like a legitimate policy difference, perfectly debatable,” Crenshaw told me. “But what then becomes clear — and there are hints along the way — the motivations are deeper and darker than their original question indicated.”

One of those questions is centered on the USS Liberty. As BuzzFeed News reporter Ellie Hall detailed in 2018:

The USS Liberty is a dog whistle referring to an incident in 1967 where Israeli forces fired on the US spy ship, killing 34, during the Six-Day War. In the aftermath, Israel said that its pilots had thought the ship was an Egyptian vessel, and apologized — the government eventually paid out $6.7 million in reparations to the survivors and families of the dead. Ever since, there have been unproven conspiracy theories surrounding the circumstances that question whether the attack was intentional. Both the Israeli and the United States governments have said that it was a case of mistaken identity.

The USS Liberty has now become an anti-Semitic meme, used to argue that the Israeli government is actually an enemy of the United States and that the country should not be receiving American funding. And members of the groyper army have been urged online to ask TPUSA speakers about the USS Liberty and other anti-Semitic conspiracy theories, like that of the “dancing Israelis,” which alleges that Israel was behind the 9/11 attacks and five Israeli nationals “danced” in celebration while watching them.

They ask these questions with the hopes of creating viral content of the responses like this video, of an October 21 Turning Point USA event at Grand Canyon University.

According to the neo-Nazi website Daily Stormer, countering speakers by simply shouting out specific conspiracy theories is good enough. It urges readers who attend Turning Point USA events who fail in their attempts to ask questions, “When you get pulled out [by security], yell “GOOGLE THE USS LIBERTY” or “GOOGLE DANCING ISRAELIS” or “AMERICA FIRST NOT ISRAEL FIRST” or just “NICK FUENTES.”

The groyper army is led in part, or at least symbolically, by Nick Fuentes, a 22-year-old former conservative radio host and Unite the Right attendee who hosts a YouTube show called “America First.”

A former ally of white nationalist Richard Spencer and a friend of white nationalists like Patrick Casey and Vincent Foxx, Fuentes has attempted to obfuscate his views by arguing on the messaging service Telegram that “America First” is a “traditionalist, Christian, conservative, reformist, American Nationalist” movement while the alt-right was “racialist” and “transnational.”

But this is pure semantics, as Fuentes is a white nationalist and an avowed anti-Semite who referred to Daily Wire writer Matt Walsh as a “shabbos goy race traitor” for condemning the El Paso, Texas, gunman who killed more than 20 people in August. In fact, in an interview with a French Canadian white nationalist, Fuentes said that the only reason he didn’t call himself a white nationalist is because “that kind of terminology is used almost exclusively by the left to defame.”

“I think in a way it’s almost redundant that you’re a ‘white’ nationalist. We know that the word ‘nation’ almost implicitly talks about ethnicity and biology,” Fuentes said.

In a series of videos deleted from his YouTube account in late October, Fuentes argues (using a thinly veiled metaphor referring to black Americans as “blackboards” and white Americans as “whiteboards”) that “America First is not America First if it’s not 100 percent whiteboard” and that he’s a “whiteboard nationalist.”

In another video, he advocates for segregation and Jim Crow, arguing “even if it was bad, who cares?” He has also described one of the Koch brothers as “an enemy of the white race” and his reaction to the El Paso shooting was to say, “the easiest way for Mexicans to not get shot in Wal-Mart is to not fucking be here.”

In September, Turning Point USA — which has faced allegations of racist behavior previously — cut ties with a brand ambassador, Ashley St. Clair, who was photographed with Fuentes, and in October, Fuentes was prevented from accessing an event at Politicon, the annual non-partisan political conference, that featured Turning Point USA founder Charlie Kirk.

But he added that Fuentes isn’t trying to take down just Turning Point USA: “He wants to burn down Conservative Inc.”

The war over campus conservatism

And yes, that future begins in college. College campuses have long been where conservative groups and conservative concepts get their start, from Young Americans for Freedom and the Sharon Statement in the 1960s to the “trigger the libs” style of TPUSA.

Basically, there are two paths.

To Rep. Crenshaw, “conservative principles aren’t exclusionary, and I firmly believe the Republican Party must continue to grow.” But in Fuentes’s view, that’s not true — conservatism must be white, Christian, and heterosexual. As he posted on his Telegram account, “America is NOT a propositional nation. We have NO ALLEGIANCE to Israel. We are CHRISTIANS and we don’t promote degeneracy. Demographic replacement is REAL and it will be CATASTROPHIC.”

And Fuentes and his army believe that they are the real conservatives and the true inheritors of conservatism, the last real defenders of what they view Trumpism to actually be standing against the “unelected face of Trumpism” in Kirk and other pundits. While Charlie Kirk and others enjoy close ties to the White House, Fuentes and the groyper army believe that he and similar figures are betraying Trump by allowing LGBTQ conservatives within the movement and advocating for legal immigration.

Or, as neo-Nazi Andrew Anglin, editor of Daily Stormer, put it, “We want Donald Trump to do what he said he was going to do. … Kirk and all of these other shills and Jews are traitors to the revolution. They have attached themselves to Trump to push a big money corporatist, homosexualist, Zionist, globalist agenda.”

President Trump’s agenda has been subverted from the beginning by people in his White House or inner circle who didn’t vote for him, aren’t loyal to him, & actively oppose his policies.

They are the Globalist GOP swamp trying to recapture the party from Trump and his voters!

In a statement, Young Americans for Freedom spokesperson Spencer Brown told me his organization sees the groyper army as working to “advance repugnant views that are antithetical to conservatism’s core belief in the sanctity and equality of every individual. “

But to Fuentes and his groyper army, that’s precisely the problem.

Who does Trump owe hundreds of millions of dollars to?

Why it’s so difficult to abolish sororities and fraternities