Why anyone could win Georgia’s runoff elections, according to the polls 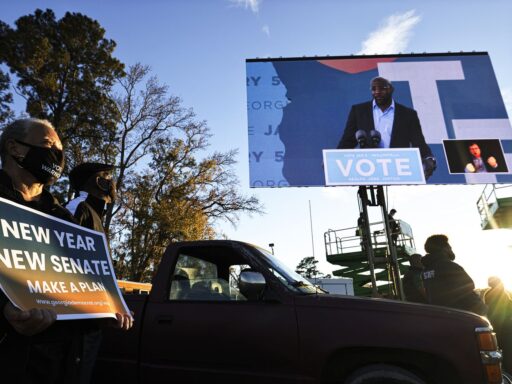 Ahead of the race, polls show both Senate races are very close.

If Democrats Jon Ossoff and Rev. Raphael Warnock win their races in Georgia’s Senate runoffs, Democrats will control both Congress and the White House. According to the polls, the two candidates have an about even chance of defeating Republican incumbent Sens. David Perdue and Kelly Loeffler.

The extended races began following Election Day on November 3, when it became clear no candidate had cleared the 50 percent threshold Georgia requires to avoid runoffs. And throughout this period — aside from a few outliers taken in December that showed decisive leads for either the Democrats or the Republicans — pollsters have found the elections to be quite close.

The most recent polls reflect this trend.

For instance, a Targoz Market Research poll taken from December 30 to January 3, of 713 likely voters, found Ossoff and Perdue to be tied in their race, each receiving 50 percent support, and Warnock to have a 2 percentage point lead (51 percent to 48 percent support) over Loeffler. A BUSR/University of Nevada Las Vegas poll taken during the same time frame, of 550 likely voters, saw a similar result: Perdue and Loeffler both leading by 1 percentage point.

FiveThirtyEight’s polling averages, which collate all polls taken since the runoff elections began (and are adjusted in an attempt to correct for polling firm differences and biases) show Ossoff leading Perdue by 1.4 percentage points, and Warnock ahead of Loeffler by 2 percentage points.

Warnock looks to have perhaps a slightly better chance of defeating Loeffler than Ossoff does besting Perdue — perhaps in part because Perdue won his seat in an election before, while Loeffler was only recently appointed, after Johnny Isakson retired in 2019. The bigger question is how much polls can tell us about who will be Georgia’s senators in the 117th Congress.

In general, it’s important to remember that polls reflect a moment in time and an estimated sample of voters, which may not hold true in election results. Some of those surveyed might not make it to the polls, for example, or late-breaking news might alter voters’ feelings about the candidates.

The most recent Georgia polls, however, reflect a period directly before Election Day — there has been little time for much to change; and many Georgians have already voted: The state had an extended early voting period, running from December 14 to 31 (with absentee ballots accepted at drop boxes until 7 pm ET on January 5). More than 3 million people cast their ballots before Election Day (4.9 million Georgians voted in the November election).

Many states, Georgia included, had similar early voting periods ahead of the 2020 general election — and many polls were taken in the days just before November 3. These polls still failed to provide an accurate picture of the electorate, with the final results being radically different in some cases.

Most polls showed President-elect Joe Biden would win, and he did. At both the state and national levels, however, the polls often overrepresented his level of support.

The Georgia polls were fairly close to the end results, but still overestimated Biden’s chances a bit: FiveThirtyEight’s polling average found Biden with a 1.2 percentage point lead over President Donald Trump. In reality, the president-elect won with a 0.25 percentage point advantage, according to Decision Desk HQ.

Polling-based predictions in other states were further off; as Vox’s Dylan Matthews noted shortly after the election, “In the Maine Senate race, FiveThirtyEight estimated that Democrat Sara Gideon would beat Republican incumbent Susan Collins by 2 points; Gideon lost by 9 points, an 11-point miss.”

There was a similar divide, particularly with respect to state polling, following the 2016 presidential election. As Matt Yglesias explained for Vox, pollsters worked to correct that by refining the models they used, and by beginning to weight — or adjust their samples — based on respondent’s education level.

But as Matthews has explained, these corrections ended up not solving the problem — in 2020, polls were still off. Matthews asked political data analyst David Shor why this was, and Shor posited an issue of social trust:

It used to be that once you control for age and race and gender and education, that people who trusted their neighbors basically voted the same as people who didn’t trust their neighbors. But then, starting in 2016, suddenly that shifted. If you look at white people without college education, high-trust non-college whites tended toward [Democrats], and low-trust non-college whites heavily turned against us. In 2016, we were polling this high-trust electorate, so we overestimated Clinton. These low-trust people still vote, even if they’re not answering these phone surveys.

Those more willing to trust strangers are more willing to participate in polls, Shor said his research has found, meaning polls oversample Democrats and undersample Republicans in a way that’s difficult to control for. Furthermore, he told Matthews, Democrats have become more politically engaged in recent months due to factors ranging from the pandemic to the civil rights movement; this has led to an increased willingness — particularly among liberal Democrats — to answer pollsters’ questions.

It’s not clear much has changed in survey sampling since November, and Georgia polls weren’t too far off then. Should there be a similar divergence between FiveThirtyEight’s current runoff polling averages and the final results, Ossoff and Warnock would win their races narrowly; a slightly larger difference — of about 0.5 percentage points in Ossoff’s case — would mean wins for Purdue and Loeffler.

Still, there’s reason to believe that in the latest Georgia polls, Ossoff and Warnock may not have the support they appear to have, and that their slim polling average leads might actually be deficits. And in a close race, even a normal polling error could miss the election winner.

Many pollsters appeared to run into trouble overestimating support for Democrats; and this, in turn, affected polling averages. Averages were helped in the general election by the number of pollsters providing data; but there are far fewer providing data points for the Georgia special election, giving each poll that is released greater weight in averages like FiveThirtyEight’s. If one of these polls is far off, the error will have an outsized effect on the overall average.

Further raising questions about the accuracy of the average is the fact that many of the more trusted names in polling haven’t been doing heavy polling of the state. Whether this matters is up for debate, as, again, a number of these trusted pollsters weren’t quite able to correctly capture support ahead of November 3.

And with the proper resources — including good modeling, access to voter data, and perhaps a few skilled machine learning engineers — even a less famous polling outfit could arguably approximate the work of more known pollsters. As Shor told Matthews:

Poll Twitter tends to ascribe these mystical powers to these different pollsters. But they’re all doing very similar things. Fundamentally, every “high-quality public pollster” does random digit dialing. They call a bunch of random numbers, roughly 1 percent of people pick up the phone, and then they ask stuff like education, and age, and race, and gender, sometimes household size. And then they weight it up to the census, because the census says how many adults do all of those things.

So the fact that more famous pollsters haven’t done extensive work lately in Georgia may not be a huge factor in the reliability of the results available.

The final factor to keep in mind when looking at Georgia’s polls is that there’s been extensive early voting so far. Some polls — like the one by Targoz Market Research — have attempted to take this into account, separating out early voters and those who plan to vote on Election Day.

On one hand, this might seem to make poll results more accurate: Where there is no early voting, pollsters are looking only at people’s sentiment, essentially how they plan to vote — if they do in fact show up to cast a ballot. But more than 3 million people who voted early in Georgia before early voting ended on December 31. Their support is completely locked in.

However, early voting tends to favor Democrats, especially in the last election cycle, which saw Democratic leaders advocating for early and mail-in voting as ways to help reduce the spread of the coronavirus. It’s generally assumed that most of the Republicans who plan to vote will do so on Election Day, a reality acknowledged by former Democratic gubernatorial candidate and current voting rights activist Stacey Abrams on ABC’s This Week Sunday, “We know Election Day is going to be the likely high turnout day for Republicans, so we need Democrats who haven’t cast their ballot toss turn out.”

Targoz’s data would seem to support this: In the firm’s poll taken December 30 to January 3, among early voters, Ossoff led Perdue 56 percent to 44 percent, while Warnock was ahead of Loeffler 56 percent to 43 percent.

This returns to the question of whether pollsters are reaching the right people: If early voters are overrepresented in polling samples, and if they are in fact more likely to be Democrats, this may compound the overinclusion of Democrats Shor identified as the problem with the November 3 polls.

All of this makes it difficult to project who will win either race based on the polls. It seems that both races will be close, and that voters are animated and committed to participating. Any kind of narrow victory would be in the range of a normal polling error, based on the averages. Whether the slight advantages Ossoff and Warnock currently enjoy in the polls will translate into wins — or if they are just mirages created by the challenges inherent to running surveys — will become clear only after the votes are counted.

The GOP stimulus counteroffer, explained
Gun stores sue to stay open during the coronavirus pandemic
Why “the whole environment in Hollywood had to change” for Harriet to get made
Hundreds of Trump supporters stormed the Capitol — but few have been arrested so far
A sociologist explains why we make spectacle out of trauma like the Thai cave boys
Any bipartisan January 6 commission is probably doomed