Why are “sexy” cats a thing? 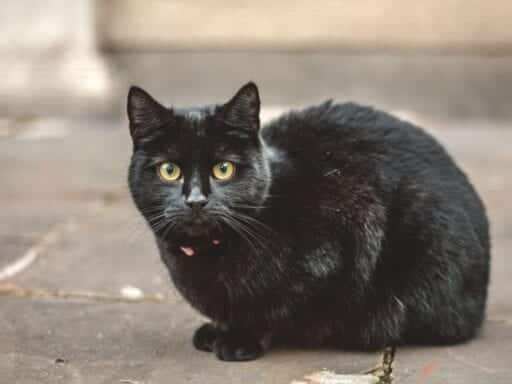 Yandy sells plenty of other sexy animal costumes, too. There are, as of this writing, five sexy deer outfits, six women’s panda ensembles, and 15 different sexy bat suits. But there is no sexy animal costume as popular as the cat. “Cats,” confirms Alicia Thompson, Yandy’s director of brand marketing, “are really the thing.”

It is not just Yandy: In the “sexy” costume category at Halloween Express, there are so many “Cats and Kitties” that they make up their own section, separate from the more generalized sexy “Animals and Insects.” The sexy cat costume is a Halloween cliché, the adult female equivalent of babies dressed as pumpkins.

What I wanted to understand was why. Why are cats “sexy” and not, say, antelopes? You could dress up as a sexy antelope, but no one ever does. Is it that cats naturally ooze some kind of human sex appeal, or that we have thrust sex appeal upon them? I have met several actual cats over the course of my life, and I have never been attracted to them. Yet this Halloween, like every other, the streets will be crawling with human women dressed up as very sexy felines.

There is, of course, a very long history linking cats to powerful women, going back at least to the Egyptian goddess Bastet, with the head of a cat and the body of a woman. But was Bastet sexy, I want to know. I ask Boria Sax, a literature professor at Mercy College and the author of several books dealing with the cultural depictions of animals. “None of the Egyptian pictures we have are remotely what we would call pornographic today,” he says, generously indulging this question. “But … uh, she certainly would be considered attractive.”

Nancy Deihl, director of the master’s program in costume studies at NYU, points me to European folklore. For centuries, there has been an association between cats and witches, she points out: Cats are witches’ totem animals, or “familiars”; there are many, many stories of witches turning into cats at night.

If cats are sexy, Deihl suggests, it is perhaps not because of their inherent cat traits, such as vomiting with alarming frequency, but because witches are sexy. “I think the whole idea of uncontrolled female power and female sexuality translates into this illicit sexiness, and cats are part of that, by virtue of association,” she says.

“It might sound pretty clichéd,” Thompson says, “but I think that’s the way people feel about women sometimes. They’re so complex. You can’t quite figure us out.” It’s not that cats are girls and dogs are boys, let’s be very clear, no one is saying that. At the same time, it is undeniably true that cats, in life and in art, are consistently gendered female.

But it is also true that cats — the actual animals — do have feline-specific traits that contribute to their particular brand of sex appeal. “I mean, I don’t know if we could call them sexy,” Deihl says, “But a cat is sinuous. They slide around. When you make eye contact with a cat, they have those provocative looks.” They’re sly; that’s the thing about cats. They’re duplicitous; they’ll snuggle with you, but they will also eat your corpse when you die.

Certainly, cats are unapologetic. “They’re not this obedient, follow-you-around, do-whatever-you-tell-them-to-do type of animal, like a dog,” she says. No cat has ever apologized to me for anything. In the hopes of further explanation, I reached out to John Napier, who designed the costumes for the original production of the musical Cats. He did not get back to me.

Can you ever truly know a cat? No. This, everyone agrees, is part of their appeal. “I think we have to use the word allure with cats,” Deihl says. In the Washington Post, Abigail Tucker, author of The Lion in the Living Room: How House Cats Tamed Us and Took Over the World, outlined their many mysteries: Cats are alert and active at night, giving the impression they may be conducting secret lives; cats are “ambush hunters,” which makes them prone to “sudden, startling movements”; cats are so tremendously sensitive they spend their days reacting to things humans cannot see or hear. Also, their eyes glow.

Cats are familiar but unknowable; that tension is at the root of their appeal. “Traditionally,” Sax says, “cats straddle the divide between the wild and the domestic.” There are, of course, domesticated animals that also live in the wild — pigs, for example — but we tend to think of any given pig as either being either one or the other. That is a feral pig; this is Wilbur.

“Perhaps dressing up as a cat is a way to assert a sort of wildness, but maybe not too much,” Sax says. “We see sex as somehow preserving a kind of wildness, and as being neither entirely civilized, nor as belonging entirely to the natural world.”

This is the sexy cat in a nutshell: wild, but not too much. Sexy, but in contained ways. “Today’s sexy cat really resides between the Playboy bunny and the witch,” says Deihl, laying out a sexy continuum.

Sexy bunnies are the second most popular animal costume on Yandy, Thompson tells me. They offer 62 interpretations.

Witches, on the other hand — even sexy, ahistorical ones — are more dangerous, more sinister, more powerful. “Witch is mature sexy,” Deihl observes. The sexy cat is coquettish, but “even the sexiest witch costume is playing on ‘woman,’ rather than ‘girl.’” A sexy cat is safer, an extra step removed from the origins of power. That’s why they call it a “sex kitten”; that’s why Ariana Grande wears the ears.

“Sexy cat” costumes are startlingly uniform. It is unclear to me if they look like cats, the animals, but they are universally understood as catlike. Catwoman has been wearing a version of it since the ’60s. “When you think of a cat and how it moves and you take out the fur and fuzz, there’s this beautiful silhouette,” Thompson explains.

A human body is not a cat. But it, too, can be made sleek and sinuous, if you wrap it up tight enough in enough faux-leather fabric. “It’s going to enhance every curve of the female physique,” Thompson says. “A woman can be wearing a catsuit and she can be covered from her neck down to her toes, with long sleeves, and there is still this oozing sex appeal and allure because you can see every curve of her body and how she’s moving.”

For the most part, women aren’t coming to the Yandy site in search of a specific costume, she says. It’s not that they are necessarily desperate to embody sexy cats. Instead, they “know what makes their body look great, and then they find that style and gravitate toward a theme that fits with that style.” It is the solution to a logistical problem. “Sexy” is more important than “cat.”

Yandy’s ark of offerings is evidence that pretty much any animal can be sexed up, although not all animals are equally alluring. “The bigger or fluffier ones don’t translate as well for us,” Thompson says. “We’re not going to produce something where you’d have to have a giant belly.” But they are up for a challenge: There are two different sexy polar bears.

The Senate will hold a public hearing on the Kavanaugh sexual assault accusation
Vox Sentences: Another migrant crisis in Europe?
Trump’s supposedly spending Labor Day weekend “studying” federal worker pay after freezing it
It took 3 hours for the EPA to tell staff they had a new boss
Google just got access to millions of medical records. Here are the pros and cons.
When New Hampshire polls close — and when we might get results