Why bankrupt Toys R Us might not be dead after all 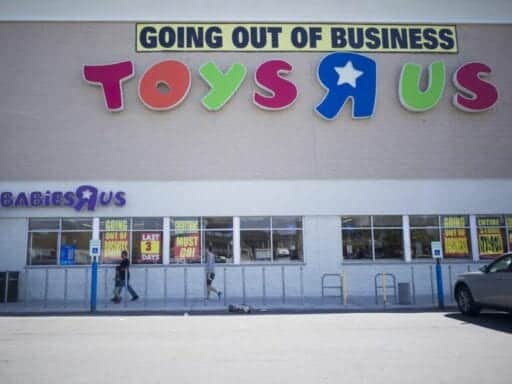 Toys R Us owners called off its bankruptcy auction. Could they be trying to revive the toy chain?

Earlier this summer, the iconic American toy store Toys R Us closed almost all 800 of its stores. The brand was deep in debt and had filed for bankruptcy in September 2017. As part of the liquidation of assets, it had plans to auction off its intellectual property, including the company’s name, website, and its brand mascot, Geoffrey the Giraffe. Shoppers believed the beloved store was gone for good.

Now, though, it seems Toys R Us might not die along with our childhood dreams after all: In court documents filed this week, which were first obtained by the Wall Street Journal, the company said it was going to abandon the sale of the Toys R Us name and branding, and hold on to them instead. On Tuesday, the company issued a press release, sharing that some of its existing owners — although it did not specify which ones — wanted to hold on to its intellectual property because they were currently drumming up ways to resurrect the brand “in a new and re-imagined way.”

The potential resurrection for Toys R Us is another chapter in the brand’s long and messy saga. After it filed for bankruptcy in 2017, the company initially had plans to reorganize so it could shed debt and stay in business. Following a poor holiday shopping season, though, its owners decided to pull the plug for good.

The brand has also made headlines for the discrepancy between its treatment of its 30,000 retail workers and its executives: While the company said it wouldn’t issue severance for all employees who lost their jobs, its executives received millions of dollars in bonuses.

But it’s bigger than just this one company: The rise and fall (and perhaps future rise) of Toys R Us demonstrates just how tumultuous the saga of an American business can be, and how helpless workers can be in the face of such a system.

What began as a single DC-based store for cribs and strollers back in 1948, Toys R Us eventually became a massive big-box chain and a symbol of American retail. Throughout its 70 years in business, the company expanded into 1,600 stores worldwide. It was known for its endless supply of toys, dolls, bikes, and electronics. Geoffrey the Giraffe was a nationally recognized symbol, and the company pitched the latest toys to children through years of expensive catalog, television, and radio marketing. The company had a huge, iconic 10,000-square-foot flagship store in Times Square, complete with a giant Ferris wheel, and even bought one of its main competitors, FAO Schwarz, in 2009.

At one point, Toys R Us was considered “the most important toy store in the world.” But even with its cheeky radio jingles and hundreds of stores, it couldn’t keep up when faced with competition from lower-priced retailers like Walmart, Target, and, most notably, Amazon. Toys R Us initially teamed up with Amazon, inking a 10-year deal that would let its website redirect to Amazon in exchange for the e-tailer stocking toys exclusively from Toys R Us. But Amazon eventually allowed other toy merchants to sell on its site, and a bitter lawsuit ended the partnership. These days, Amazon sells an annual $4.5 billion worth of toys.

While Toys R Us was still pulling in $792 million annually as of 2017, it wasn’t swift enough to compete with a giant like Amazon, and its brick-and-mortar stores carried huge costs as well. When the company finally decided to revamp its website in 2016, global chief technology officer Lance Wills admitted the company’s uphill battle was to “catch up on 10 years of innovation.”

Amazon was certainly not the only factor to blame for the sinking of Toys R Us. By the time the company filed for bankruptcy in 2017, it was drowning in $7.9 billion worth of debt. Many have pointed out that the debt was a result of “pillaging by pirates” and “Wall Street greed” on the part of investors.

In 2005, the private equity firm Bain Capital and two partners, KKR and Vornado Realty Trust, purchased Toys R Us for $6 billion. They paid $1.2 billion out of pocket, while the rest was borrowed.

It was Toys R Us, though, that was responsible for paying back the remaining $4.8 billion its investors owed, and so the company had to make $400 million in debt payments every year— a number that was often higher than its annual profits. This deal made it impossible for the toy company to keep up, in a situation one retail advocacy group called “an ATM machine for Wall Street.”

When news about Toys R Us’s financial situation became public, so did the stark contrast between its lowest-level associates and company executives. More than 30,000 retail workers lost their jobs, and the company said they would not receive severance or payments for unused sick or vacation days. Bain Capital, KKR, and Vornado, on the other hand, reportedly earned $470 million off Toys R Us, in addition to executives receiving multimillion-dollar bonuses.

Toys R Us going out of business was felt around the country. A photo of Geoffrey the Giraffe holding a suitcase inside an empty store went viral, and shoppers mourned the childhood favorite chain. Meanwhile, store associates staged mock funerals in the lobby of Bain’s corporate headquarters for Toys R Us, holding a giant tombstone of Geoffrey. Rallies and protests were held inside store parking lots, with politicians like Sens. Cory Booker, Kirsten Gillibrand, and Bernie Sanders getting involved. Workers also took their fight to Congress, lobbying in Washington for more oversight of private equity deals in retail.

A sign of progress for morals in American business?

Over the past few months, Toys R Us has closed almost all of its stores, shut down its website, and held mega-sales to get rid of all of its merchandise and assets — store equipment and fixtures included. It certainly seemed like it was all over. Now, though, since backing out of its plans to auction off its branding, name, and iconic mascot, Toys R Us’s owners say they are attempting to “develop ideas” for what new Toys R Us stores, and stores from its sister brand, Babies R Us, would look like.

To be clear, this walkback of the IP bankruptcy auction doesn’t mean Toys R Us is escaping bankruptcy altogether; instead, owners are holding on to its most valuable assets and are trying to find a future for the company.

It’s unclear if the brand will return to its former glory. It could very well resurrect as a zombie brand, like American Apparel or Nasty Gal, which were both rescued from bankruptcy but are noticeably unlike the companies they once were. Toys R Us owners might also decide to license the company name and branding to someone else, earning royalties instead of undertaking a gargantuan task like resuscitating a brand.

It is fair to assume, though, that not all of the 30,000 workers who were put out of a job will get rehired. But if there’s one silver lining in the troubling, emotional narrative, it’s that all the attention Toys R Us attracted actually lead to some retribution. The Washington Post reported this week that Bain Capital and KKR have agreed to set aside $20 million for a fund that will be distributed to Toys R Us retail workers who are owed money — a rare positive ending to an all-too-common story.

While Rise Up Retail, the advocacy group that had been working with Toys R Us workers, believes the hedge funds owe its workers $75 million, not just $20 million, they also told the Post that “this win at Toys R Us is part of a bigger movement of workers and families fighting back to hold Wall Street accountable for the investments that they make.”

Republicans’ threat to call Hunter Biden as an impeachment witness, explained
Trump accuses China of 2018 election interference: “They do not want me or us to win”
The paradox of online “body positivity”
Pussy Riot says it’s behind the World Cup protesters
Walmart is done trying to buy small retailers to compete with Amazon
James Holzhauer’s Jeopardy winning streak has come to an end