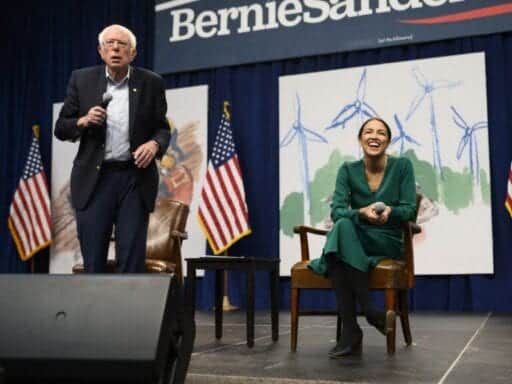 Dubbed the Green New Deal for Public Housing Act, the proposal aims to transform the entire stock of public housing in the US, 1.2 million units, into energy-efficient homes powered by onsite renewable energy. Authors say the bill would create about 240,000 jobs per year and reduce greenhouse emissions equivalent to taking 1.2 million cars off the road.

This is the first piece of legislation with official Green New Deal branding and is co-written by Sanders, one of the progressive frontrunners for the 2020 presidential race. The initial Green New Deal resolution released in March by Ocasio-Cortez and Sen. Ed Markey (D-MA) was a broad framework that laid out principles for a comprehensive strategy to limit climate change, like the need for a just transition toward cleaner energy. This new bill actually starts constructing policy within that framework.

“This is really important, it’s an exemplary specification of what targeted green investment would look like,” said Daniel Aldana Cohen, the lead researcher on a Green New Deal study by progressive think tank Data for Progress.

By starting with housing, the legislators appear to be trying to make inroads with a broad political base and avoid some of the more contentious aspects of the Green New Deal, like the transition away from fossil fuels. That issue in particular has divided labor unions because it would lead to the end of mining and drilling jobs.

The Green New Deal has risen in popularity since the resolution was introduced in February; an NPR/PBS Newshour/Marist poll this summer showed 60 percent of registered voters supported it, including 86 percent of Democrats and 64 percent of independents (Republicans were decidedly less in favor).

You’re right, @RepAOC. We will ensure a dignified life, with parks, gardens, and community centers, for our public housing residents. We invest $172 billion in retrofits that improve health, safety and comfort—while eliminating all carbon emissions in our public housing. https://t.co/jF04ktTP7G

But to make a difference, the Green New Deal housing bill has to do more than rally climate and housing activists; it must build up a broad base of support throughout the country and in government. The prospects of passing such legislation are dim in the current Congress, but it could tee up a policy agenda for the next administration. Regardless of the outcome of the next election, climate change and housing will not go away as national concerns.

Public housing is an important venue for fighting climate change

Buildings — homes, hotels, offices, and stores — account for 40 percent of US greenhouse gas emissions. Though building codes have ramped up efficiency standards for new construction, many older, leakier, draftier homes and offices remain and will continue to be occupied for decades. Overall energy use in buildings is still rising. That means upgrading and retrofitting structures to use less energy and emit less is a critical tactic in fighting climate change.

Since most real estate is in private hands, public housing offers an avenue for the federal government to get involved. The 1.2 million units range from single-family homes to apartments in high-rises, making it a useful policy laboratory for different kinds of energy interventions.

While these homes receive federal support, they are often managed by local authorities. And many of these homes are in dire need of maintenance and improvement: According to the Urban Institute, most public housing in the US is at least 40 years old “and needs major capital repairs like new windows, plumbing, roofs, and heating systems to keep it operational.”

The Green New Deal housing bill would issue grants to upgrade buildings to make them more energy efficient, including installing solar panels and insulating walls and windows. Upgrades would also be made to things inside the units, including installing all-electric modern appliances, energy-efficient lightbulbs, and low-flow toilets to reduce water usage. Lead pipes leaching toxins into drinking water would be replaced, and public housing in areas vulnerable to effects of climate change would be made more resilient.

Public housing residents typically have lower incomes, which means they would benefit immensely from the grants. A 2016 report from the American Council for an Energy-Efficient Economy found that low-income households pay double the share of income for energy compared to the US median. According to the Environmental Protection Agency, energy costs can eat up almost one-fifth of the annual income for single, elderly, poor, and disabled persons living on Social Security. The national average of income spent on energy is 4 percent.

So directing energy efficiency upgrades to public housing yields dividends for many of the people who need it most. And deploying such measures means creating jobs in these communities.

Beyond its already ambitious target of retrofitting all public housing to become more energy-efficient, the Green New Deal for Public Housing Act has another massive component: It aims to employ the people who live in the public housing units to do these 1.2 million upgrades around the country.

Data for Progress research estimates the bill would create over 240,000 jobs per year across the United States — and not just in blue states. The research estimated it would create up to 17,489 skilled construction and maintenance jobs per year in red states, compared to up to 9,428 of those jobs in blue states. But of course, that would depend on red states deciding to accept federal money — which history shows isn’t always a given.

“If Republicans are going to oppose this, they’re going to have to defend keeping jobs and benefits away from their own constituents,” said Aldana Cohen. “Public housing is a national issue across party lines. Why should red places miss out on the green 21st century economy? It doesn’t make sense.”

Much of the bill’s funding would come from repealing the 2017 tax cuts passed by Republicans. “I refuse to allow Republicans to set a progressive policy to fail because they decided to run up a credit card to tax to give freebies to their friends,” Ocasio-Cortez told the Washington Post.

The bill also calls for hiring workers “to the greatest extent practicable” from public housing residents, people living within 50 miles of work sites, armed forces veterans, formerly incarcerated people, and union workers. And it repeals the Faircloth Amendment to the Housing Act of 1937. This provision prevents HUD from funding projects that would increase the number of housing units under its management. This amendment has been a major hurdle for constructing new public housing.

Housing is a major campaign issue in the 2020 campaign for president, but many of these problems can’t be solved from the White House

Public housing is just one front in a vast reckoning over where and how people will live in the US. California is one of many states suffering from an acute housing shortage, which is driving up the cost of living and forcing people into substandard housing or out of cities altogether.

Across the US, there is a growing movement to change zoning to allow higher-density housing to relieve pressure on the market. Some cities are experiencing a rise in homelessness.

But housing policies are largely governed at the state and local level, which means the president has few levers for shaping how people live. As Vox’s Matt Yglesias explained, federal housing subsidies and bolstering the social safety net would go a long way to help low-income families secure housing. But the thornier problem of not enough homes in areas with the best job opportunities requires a more coordinated response across all levels of government.

The Green New Deal public housing bill is a step toward solving this by creating more jobs and more housing at the same time.

Rock and roll icon Little Richard has died at 87
All the near-total abortion bans passed this year have now been blocked in court
Will coronavirus cause a global recession? We still don’t know.
Putting a dollar value on one of oil’s biggest subsidies: military protection
Trump’s dangerous “LIBERATE” tweets represent the views of a small minority
What’s wrong with a President Pence?