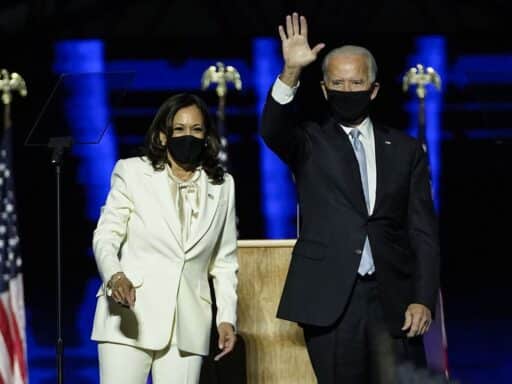 The masking up of America will depend on Biden’s ability to work with local governments and convince all Americans to wear them.

Editor’s note, January 20, 2021: President Joe Biden’s first official act on his first day in office was signing an executive order mandating that masks be worn on all federal properties and by federal employees and contractors.

“The first order I’m going to be signing here relates to Covid,” Biden said. “It’s requiring, as I said all along, where I have authority, mandating that masks be worn, social distancing be kept on federal property.”

The original story below was published on November 9, 2020.

When President-elect Joe Biden accepted the Democratic nomination on August 20, he said part of his Covid-19 plan would be a “national mandate to wear a mask.” Five months later, on January 20, he’ll have his chance to try to implement one.

“It’s time to end the politicization of basic, responsible public health steps like mask-wearing and social distancing,” Biden said on Monday. “The single most effective thing we can do to stop the spread of Covid: Wear a mask.”

He followed that up with a tweet encouraging the use of masks:

I won’t be president until January 20th, but my message today to everyone is this: wear a mask.

But it won’t be easy to implement a mask mandate for the whole country, especially when 16 states still don’t have statewide mandates. (The AARP listed 33 states with mask mandates by the end of October. Utah, which issued its mandate on Monday, makes 34. Washington, DC, and Puerto Rico also have mandates.)

With limited federal powers at his disposal, Biden will have to convince everyone from state and local governments down to individual Americans that masks are one of the best and easiest ways to stop the spread of the coronavirus.

There are varying schools of thought about whether the president has the authority to issue a national mask mandate, as many other countries have. Some attempts to do so at the state and local level have been met with lawsuits and refusals to comply, as masks have become an increasingly politicized and contentious issue. Biden has said he will issue an executive order requiring masks to be worn on federal property.

Beyond that, Biden’s version of a national mask mandate, as spelled out in his new transition website, does not appear to come from him. Instead, he’s going to be “working with governors and mayors” to encourage them to issue their own mandates, as well as remind Americans to wear masks. While the majority of America’s governors have issued statewide mandates, 16 states have not — including Mississippi, which revoked its mask mandate in October (Gov. Tate Reeves is requiring masks in certain counties).

Though it’s hard to see a reality where states and localities run by Republicans work hand in hand with a Democratic president these days — even in the face of a virus that infects people regardless of their political leanings — many firmly Republican state governments have issued mask mandates once their constituents began getting sick and dying, most recently Utah on Monday. Others still seem to take pride in their obstinance, like South Dakota Gov. Kristi Noem. Even in that state, however, local governments are trying to issue their own orders.

The majority of Americans approve of masks and mandates

While the outgoing administration made a show of not wearing masks even in indoor spaces with large numbers of people where social distancing was impossible, Biden and Vice President-elect Kamala Harris were visible sticklers for masks and social distancing throughout the campaign. As president-elect, Biden has already announced a board of advisers full of experts in science and public health. Despite the divided country he will inherit, setting a new tone of adherence to recommended safety measures may encourage Americans to follow his lead.

Helping him out here is the fact that wearing masks and mask mandates have majority support, even among Americans who lean Republican — and this support predates the most recent, and worst, wave of coronavirus cases the nation is now battling.

There is also data showing that areas with high mask usage see fewer cases of Covid-19 and a decrease in new infections as the use of masks goes up. One recent study estimated that universal mask use in America could save 130,000 lives.

“Small acts add up to enormous achievements,” Biden said on Monday. “So let’s wear a mask. Let’s get to work.”