Why Big Tech isn’t fighting Trump in public this time 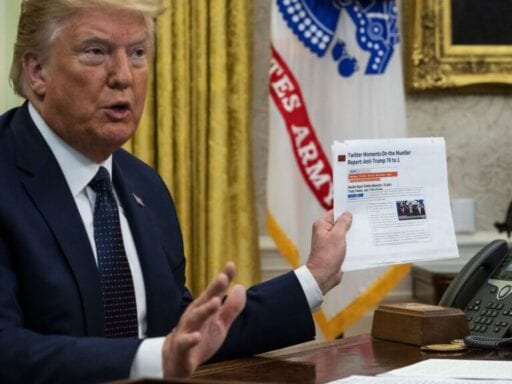 Earlier this week, the president of the United States signed an order that’s meant to cripple many of America’s most powerful internet companies. Or, at the very least, punish them.

So what do America’s most powerful internet companies have to say about that?

Not very much. Or, at least, not much publicly.

Yes, Mark Zuckerberg went on Fox News in advance of Donald Trump’s executive order to criticize Twitter for fact-checking Trump. It was a gambit to speak directly to Trump, as many Fox News hosts and guests try to do. And Twitter CEO Jack Dorsey — currently the focus of Trump’s anti-tech focus — spoke out on Twitter.

But the rest of Big Tech? Barely a peep.

Yesterday, Google sent out a muted statement to reporters who asked the company for comment: “We have clear content policies and we enforce them without regard to political viewpoint. Our platforms have empowered a wide range of people and organizations from across the political spectrum, giving them a voice and new ways to reach their audiences. Undermining Section 230 in this way would hurt America’s economy and its global leadership on internet freedom.”

Not a stirring call to arms. But at least it was … something. Other tech giants, including Microsoft, Amazon, and Apple, haven’t uttered a word about the order.

That order, again, is aimed at neutering or abolishing Section 230 of the Communications Decency Act — one of the key legal pillars of the internet as we know it. Tl;dr: Section 230 says tech companies can’t be held liable for most things their users put on their platforms.

Section 230 is crucial to your business if you’re a “platform” company like Twitter, Facebook, or Google’s YouTube, which all depend on user-generated content. It’s also potentially important for Amazon, which effectively runs its own platform that connects buyers and sellers. And it’s just generally important for anyone who uses the internet to say or find whatever they want. So, everyone.

This week’s order and tech’s nonreaction to it is a striking change from the early days of the Trump presidency in January 2017, when seemingly every tech company loudly announced their fierce opposition to a Trump executive order that banned travel from seven predominantly Muslim countries. Tech leaders lined up to denounce the travel ban and promised their employees and customers that they’d fight the ban in court. Google co-founder Sergey Brin even joined anti-ban protestors at the San Francisco airport.

A few things, according to tech executives I’ve talked to. Here are some of the rationales I’ve heard, which aren’t necessarily mutually exclusive:

One argument I didn’t hear but am happy to serve up myself: Tech executives, like other business leaders, have figured out that the best way to get stuff done in the Trump administration — or to not have things done to you — is to not publicly fight with Trump and then get his ear in private. Apple’s Tim Cook, for instance, seems to walk that line quite effectively.

But all of this seems to be varying ways of saying the same thing: After three-plus years, tech executives don’t take the president of the United States very seriously anymore. And they’re willing to endure Trump’s tantrums as long as they don’t think they’re going to turn into something more serious.

If you’re someone who would still like to see leaders stand up in public and denounce Bad Ideas on the record because it’s important to oppose Bad Ideas before they become Popular Ideas — and I’m one of those — then this stance is disappointing. And worrisome. Because if we’ve learned one thing from the Trump era, it’s that unimaginable things become real things much quicker, and much more often, than we would ever dream of.

Trump’s latest morning of tweets was off the rails, even by his standards
Omar al-Bashir, deposed president of Sudan, has been sentenced to 2 years in a reform facility
Forget GDP — New Zealand is prioritizing gross national well-being
11 of 2020’s best TV shows, video games, podcasts, and more
How Watchmen’s giant squid attack changes everything
The Supreme Court hands Trump the narrowest victory on his latest attempt to rig the census