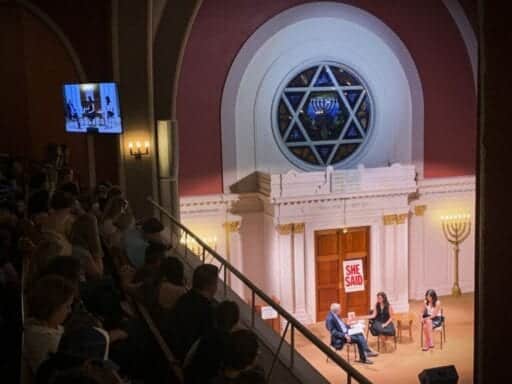 Share
Loading...
Bob Woodward in conversation with Jodi Kantor (center) and Megan Twohey at the Sixth & I synagogue in Washington, DC, on October 2, 2019. | Kainaz Amaria/Vox

Kantor and Twohey broke the Harvey Weinstein story. Woodward asked them if Weinstein was trying to do “a weird foreplay.”

Legendary journalist Bob Woodward is coming under heavy fire for the questions he asked while interviewing the Pulitzer-winning investigative team of Jodi Kantor and Megan Twohey at a Washington, DC, event on Wednesday night. After Woodward repeatedly interrupted Kantor and Twohey and posited that Harvey Weinstein’s behavior could have been “weird foreplay,” audience members booed Woodward, and some attendees even walked out of the event.

The conversation didn’t get off to such a terrible start. “He did stand up and hail them as tremendous journalists and said how remarkable their work and the book is,” said Kainaz Amaria, Vox’s visuals editor, who attended the event. “And he asked them questions about the investigative process. However, he also interrupted them quite a few times.”

Some audience members began to yell back at Woodward as he repeatedly interrupted Kantor and Twohey, saying, “Let them finish!” and “Every woman deserves to be heard!”

And as the conversation veered away from investigative journalism and into sexual misconduct, Woodward’s questions apparently became less and less well-informed.

The most detailed account of what happened comes from Robyn Swirling, the founder of the anti-sexual-harassment organization Works in Progress, who wrote a long tweet thread describing Woodward’s questions. Swirling says that Woodward spent more than 10 minutes asking Kantor and Twohey why Weinstein harassed and assaulted women the way that he allegedly did. She also says that when Kantor and Twohey repeated that Weinstein’s actions were an abuse of power, enabled by a system that allowed him to silence women, Woodward accused them of dodging his question.

“So it’s about power? It’s about sex also, though, isn’t it?” Woodward reportedly said, asking whether Weinstein’s actions might have been “a weird foreplay.”

This went on for more than 10 minutes. Showing exactly why he was the wrong person to have any sort of public (or private) discussion about #metoo, @realBobWoodward said “So it’s about power? It’s about sex also though, isn’t it?”

This question was the point at which Woodward lost the audience, because it so fundamentally misinterpreted both what researchers know about sexual violence and Kantor and Twohey’s book.

Current research agrees with Twohey and Kantor, not Woodward: Sexual assault isn’t really about sex at all, nor is it “a weird foreplay.” It’s about power.

“Work with sexual offenders has confirmed that the motivating factor for sexual violence is not sexual desire,” the World Health Organization states in its guidelines on sexual violence. “Although sexuality and aggression are involved in all forms of sexual violence, sex is merely the medium used to express various types of non-sexual feelings such as anger and hostility towards women, as well as a need to control, dominate and assert power over them.”

And the question of what might have been going on in Weinstein’s head is missing from the pointedly titled She Said for a reason: Kantor and Twohey didn’t set out to analyze Weinstein’s motivations, but to focus on the effects of his actions on the women he is accused of abusing, and to prove through reporting that there was a whole system covering up Weinstein’s misdeeds and silencing the women he targeted.

The tension in the room was only exacerbated by Woodward’s repeated claims that Kantor and Twohey were dodging his question. “You could just feel the whole audience going into a defensive posture,” Amaria, the Vox visuals editor, said.

Ouch @realBobWoodward is blowing this interview with @mega2e and @jodikantor on their book “She Said.” Interruptive, not focused on the women who were victimized by Harvey Weinstein and weirdly obsessed with that creep, it’s a exercise in how not to interview. The crowd no like. pic.twitter.com/sEvEZPOlmG

As the conversation went on, Woodward continued to ask questions that audience members say betrayed his lack of knowledge about sexual violence. Statistically, sexual violence is underreported, and the rate of false reports is around 2 percent — the same as with other felonies — but Woodward seemed preoccupied with the issue of whether women who accused powerful men of sexual violence could be believed. He asked Kantor and Twohey whether any of the women they spoke to about Weinstein were lying, and whether they believed Christine Blasey Ford about her sexual assault accusation against Brett Kavanaugh, who is now a Supreme Court justice.

“Woodward’s follow-up was, ‘Well, there was a lot she didn’t remember,’” Amaria said. “So Megan had to circle back and argue, ‘If you look at the research on trauma victims, that tracks. Trauma leaves some gaps in the memory, while other moments are solidified forever.’”

In an emailed statement to Vox, Kantor and Twohey said, “We’re just starting our book tour, and we’re grateful to all the moderators — Bob Woodward, Katie Couric, America Ferrera and many others — who have agreed to join us onstage. We welcome all questions, from them and especially from the audience, because each one is an opportunity to relate the wrenching decisions that many of our sources had to make and grapple with #MeToo as an example and test of social change in our time.”

But Woodward’s refusal to accept Twohey and Kantor’s answers to his questions — and his repeated attempts to talk over them as they tried to respond — was a refusal to accept their expertise as journalists, and a decision to prioritize his own understanding of sexual violence over theirs without any apparent education in the field.

Ironically, the conversation ended up replicating the very power dynamics that Twohey and Kantor were trying to explain, the power dynamics that let Weinstein get away with what he did for so long: a man exerting his own institutional power over the women in the room with him, just because he could.

Antitrust officials ordered Facebook, Amazon, and other tech giants to disclose 10 years of acquisit...
The triumph of the Nostalgiacrats
What to expect during the House Judiciary Committee’s first impeachment hearing
The best $1100 I ever spent: driving lessons as an adult
Key Republican senators are sticking with McConnell on an impeachment trial plan — for now
This week in TikTok: The racism scandal among the app’s top creators