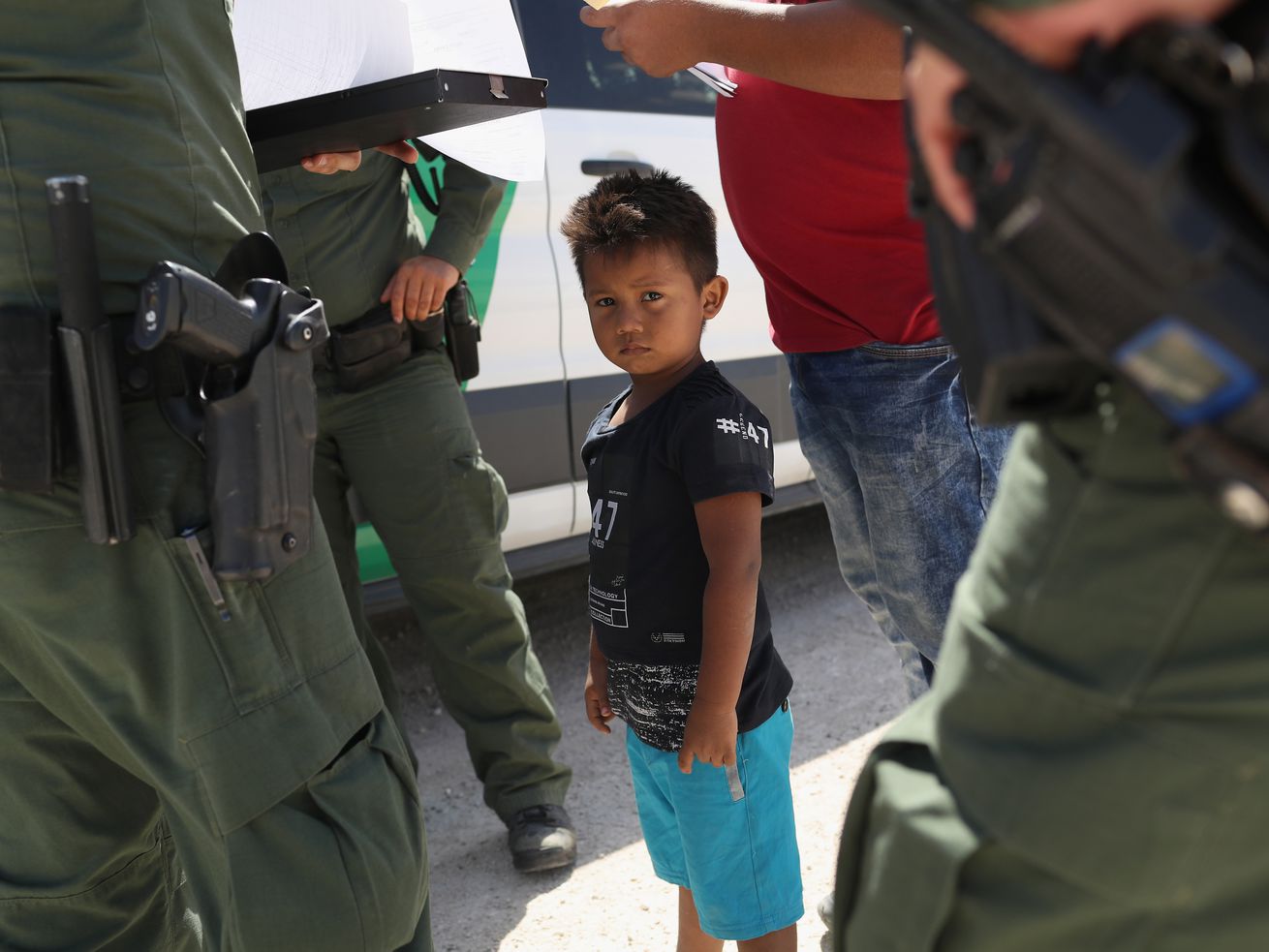 It’s more complicated than you think.

The US government, as a matter of policy, has decided to separate families who are seeking asylum at the border by crossing over illegally.

It’s a horrendous situation that has provoked indignation in the US and across the world. One of the many questions you might ask when looking at a story like this is, “How can Border Patrol agents participate in this policy?” Surely there are mothers and fathers among them, and surely they feel conflicted about ripping children out of their parents’ arms. Yet they’re doing it anyway.

To shed some light on this issue, I reached out to Bernardo Zacka, a research fellow at the Center for Ethics in Society at Stanford University and the author of the book When the State Meets the Street. Zacka’s book is an on-the-ground look at the choices bureaucrats must make every day, and the moral environment that structures those choices.

It’s easy — and necessary — to judge the decisions of bureaucrats, but the conditions they face are enormously complicated and often make it more difficult for them to act ethically. I asked Zacka about the reasons behind this, and what we can do to create bureaucracies that encourage people to do what’s right even when they’re asked or pressured to do the opposite.

A lot of people look at what’s happening on the border right now and wonder why Border Patrol agents would comply with orders many of them must know are wrong or immoral.

I worry that framing the matter like this detracts from the real problem. How many people are willing to risk their job to do the right thing? Can we really hold people to such a standard and be surprised if they fail to meet it? The problem is that we put people in situations where they must either act immorally or act heroically. That’s a recipe for disaster.

Your book is largely about this tension in which bureaucrats operate. On the one hand, they’re asked to thoughtlessly perform vague and conflicting duties, and on the other hand, they have to make moral choices in an environment in which they don’t have the resources or authority to tackle problems in any definitive way. That’s not an easy thing to negotiate.

It’s helpful to distinguish between two sorts of predicaments. There are cases where the directives you receive are clear but morally troubling, and cases where the directives themselves are vague and ambiguous. The first type of case arises when bureaucracies have lost their moral compass, and as a bureaucrat, you must find the strength necessary to say no, or the resilience to live with yourself having said yes. You might think that this is the kind of situation Border Patrol agents are facing right now.

The second sort of case arises more often in bureaucracies. When the law runs out, bureaucrats must resort to a variety of standards to guide their action — they must, at the very least, strive to be efficient, fair, responsive, and respectful.

Knowing how to weigh these values against one another and dealing with the conflicts that occur between them requires people to exert complex moral judgment in the thick of everyday work. Both types of cases are difficult to negotiate, but they are challenging in different ways.

I thought a lot about the great political theorist Hannah Arendt while reading your book. She studied Nazism and was one of the first people to note that the Holocaust was, in fact, an industrial phenomenon, that it was carried out by everyday German bureaucrats who were able to commit the worst imaginable crimes and somehow go home at night and live otherwise normal lives. Surely that says something about the nature of bureaucratic structures.

Arendt’s writing on the topic is terrific, but I’m not sure how much it can help us make sense of the experience of front-line workers like Border Patrol agents.

In the aftermath of World War II, many scholars approached bureaucracy as an industrial phenomenon, a bit like a Fordist production line. If all you do is pull a lever alongside thousands of others who are doing similarly minute tasks, none of you may be quite aware that you are producing a weapon. The repetitiveness of the work, and the lack of contact with those who will be on the receiving end of it, has a way of numbing our moral sensibilities.

But things are different when you’re a welfare worker, a police officer, or a Border Patrol agent, because you’re directly intervening in people’s lives. You know you are separating children from their parents; you can see the tears and hear the screams. So the mechanism that explains why you can go home and live a normal life has to be different. That’s something I try to flesh out in the book.

If I were to sum it up, I’d say this: As a front-line worker, it’s not that bureaucracy shields you from experiencing morally agonizing situations, but that it exposes you to them so frequently that you must develop psychological coping mechanisms that reduce the strain.

This is how indifference comes about.

I appreciate that distinction, but when I look at what’s happening right now on the southern border, I see the tendency of bureaucracies to separate the people who are doing the job from the implications (moral or otherwise) of the work. Border Patrol agents might personally feel awful about separating kids from their parents, but because they’re operating as instruments of a larger machine, they don’t feel themselves morally responsible for their actions.

I’d put things slightly differently. Imagine you were a Border Patrol agent and found the policy morally repugnant. You might be outraged at having to implement it for the first, second, or third week. But how long can your outrage last if you can’t do anything about it? And more importantly, perhaps, how long can you go on living with yourself as someone who routinely does morally repugnant acts?

One way out of this is to start relating to your role differently — perhaps what you’re doing is not so bad after all; perhaps your moral qualms have no place given the social role you occupy.

That way, you can regain your self-respect, but at the cost of a reductive understanding of your responsibilities. A lot of this happens unconsciously, of course. You may ultimately end up with something that looks an awful lot like indifference and detachment, but it would have originated in the opposite sentiment.

But there are bureaucrats who transcend the constraints of their environment, who find a way to do what’s right or who walk away in protest if they can’t. Are there lessons in these examples?

This gave rise to endless dilemmas. Do you see as many people as possible but process their cases summarily; or do you give each person the time and attention they need but process fewer of them? There’s no good answer. Yet despite the constraints and pressure, some workers managed to strike sensible compromises between various demands.

How did they do that? Some of it boils down to temperament, of course, but a large part, I think, has to do with mental exercises — tricks, practices, habits — that allowed them to cope well under pressure. It will only take you so far, short of policy or administrative reform, but it makes a difference.

So what are we to do about all this? Is it in the nature of bureaucracies to produce inhuman outcomes, or can we fix them by, say, changing the incentive structures?

Bureaucracies can only be as good as the policies they are tasked to implement. Setting that aside, and assuming that we are dealing with sensible policies, are bureaucracies themselves inherently bad? I’m not so sure. After all, most of the good things government does are done by bureaucracies.

To the extent that bureaucracies stand for the impartial application of the law, they’re a central component of a democracy. But it’s important to remember that they should be evaluated differently than their counterparts in the private sector. It’s not enough for them to be efficient; they must also be fair, responsive, and respectful. This creates all sorts of conflicts and necessarily makes their operation clunky. This doesn’t mean they are failing, only that we ask them to do a lot at once.

Can bureaucracies be improved? For sure. Tweaking the incentive structure is certainly part of the answer, but that alone may not take us very far. It’s been tried since the 1980s by pretty much every single wave of public sector reform. Another way forward might be to approach bureaucracies not just as instruments that execute directives, but as organizations that demand complex judgment from their employees. If we realize that government bureaucracies are professional organizations and not simply factories, we’ll be more likely to produce outcomes that are fair and humane.

OnPolitics Today: 'I really don't care' about this jacket
How to make sure the census counts you
Trump close to nominating CFPB chief: report
House GOP in disarray ahead of key immigration votes
Trump adviser Roger Stone reveals new meeting with Russian
States plan to sue over family separation