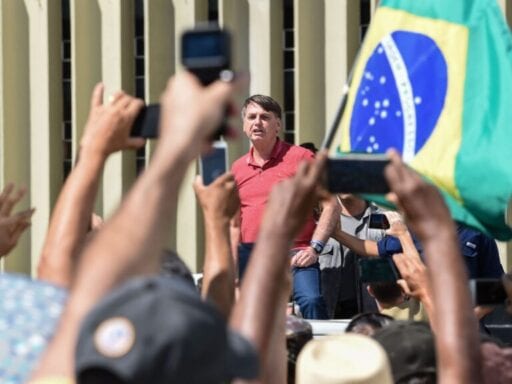 In a head-spinning political maneuver, Brazilian President Jair Bolsonaro joined demonstrations held in Brasilia on Sunday to protest coronavirus-related lockdowns and to call for a military coup.

Political observers say the protesters were right-wing Bolsonaro supporters who called for military intervention on behalf of the president because they view the country’s supreme court and legislature as obstacles to his campaign against pandemic lockdown measures, despite the fact that the country has more than 35,000 confirmed cases and over 2,300 deaths as of April 19.

“Now it is the people in power. It’s more than your right — it’s your obligation to fight for your country,” Bolsonaro said, standing on a pickup truck outside the Army headquarters. “We don’t want to negotiate anything. We want action for Brazil.”

Political commentators say it’s unlikely that Bolsonaro literally hoped to foment a coup with his incendiary remarks outside the Army headquarters, but rather saw the protest as an opportunity to mobilize his political base. The president has become increasingly isolated politically due to his resistance to approaching the pandemic in accordance with medical and scientific advice, and clashes with politicians issuing quarantine orders at the state level.

“More likely today was a ‘Let’s keep the base motivated’ maneuver than an explicit declaration of intent for supporters’ goals,” tweeted Brian Winter, the editor-in-chief of Americas Quarterly.

However, Winter also pointed out that Bolsonaro’s family has raised the idea of a “self-coup” in the past, viewing the intervention of the military as a way to enhance power for the president and do away with constraints on civilian rule.

Sunday’s speech was only the latest gesture of Bolsonaro’s hostility for the national government. On Thursday, Bolsonaro fired his popular health minister, Luiz Henrique Mandetta, because Mandetta urged Brazilians to observe social distancing and to stay indoors. The dismissal came after weeks of the two offering diverging prescriptions for how the public should act to slow the spread of the virus, and raised the ire of many Brazilians.

Bolsonaro has consistently downplayed the virus, calling it a “little flu” and arguing that Brazilians are well-suited for it because they can be dunked in sewage and “don’t catch a thing.” The president has also frequently defied social distancing guidelines from his own administration, and has opposed lockdowns initiated by governors of states, accusing them of exploiting the pandemic for political gain.

In other words, much like what has happened in the United States, Bolsonaro has turned the coronavirus crisis into a polarizing culture war. And increasingly, he has cast those who take it too seriously, in his view, as political adversaries.

An overwhelming majority of the public favored the health minister’s approach to dealing with the coronavirus crisis over Bolsonaro’s denialism, and when the minister was fired many of the president’s opponents banged pots on their balconies in a show of anger.

But Bolsonaro’s right-wing base has also been emboldened, and has used public protests in recent weeks to rally behind him. This weekend, hundreds of protesters took to the streets in Rio de Janeiro, Sao Paulo, and Brasilia and called for governors to resign for their lockdown measures. The president’s supporters argue his approach for dealing with the virus is better for the country’s long-term health, particularly on the economic front.

“Either we just have the pandemic, which is already a lot, or we have the pandemic and chaos,” said Anderson Moraes, a state legislator who supported the protests, according to Al Jazeera English. “For sure, lives are more important than anything else, but we can’t take decisions today without thinking about tomorrow.”

But Bolsonaro’s critics argue his support for the protesters is a sign of authoritarian tendencies.

“Bolsonaro is merely applying a strategy that has been adopted by numerous populists with autocratic tendencies before him, like [the late Venezuelan president Hugo] Chávez & [Hungarian Prime Minister Viktor] Orbán,” Oliver Stuenkel, an international relations professor at the Getulio Vargas Foundation in Sao Paulo, tweeted Sunday. “Pro-regime protests do not occur in healthy democracies. They are the product of a leader asking his followers to attack a chosen enemy.”

Why does the Pentagon keep getting surprised by Trump?
I’m an Instacart shopper. I buy groceries so others can socially isolate.
Better Call Saul season 4 finale: The hugely important final shot, explained
What the next GDP figure will — and won’t — mean
Americans still drink. But in 2019, it became cool to drink less.
Avengers: Endgame is a Marvel miracle