Why cashier’s checks are part of so many online scams 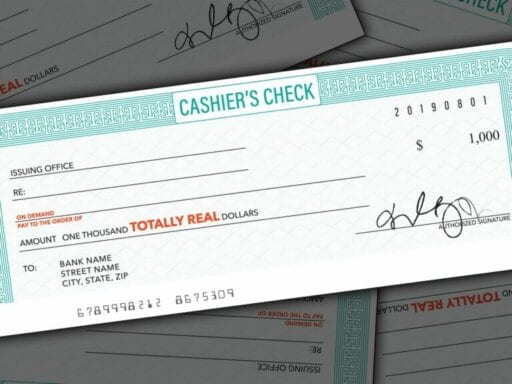 Share
Loading...
Cashier’s checks are supposed to be even safer than regular checks. Thanks to scammers, they’re not. | Sarah Lawrence for Vox

Craigslist, Facebook Marketplace, and other places people buy and sell online are seeing an uptick in this particular kind of scam.

I have been corresponding with a scammer who goes by the name of Mary Dean for several months now. Our relationship started because she said she wanted to buy my chronically unplayed cello; I have lugged this instrument during two apartment moves over the past few months, and finally put it up for sale on Craigslist.

After her first message, there was a delay, but I remained hopeful. Eventually, Mary Dean wrote and said that her mother had died and she had to tend to the family’s affairs, and I told her to take as long as she needed. When Mary Dean messaged me to say she was sending a cashier’s check for twice as much as I’d asked for so that I could “pay the movers,” my heart sank. I began to suspect that the check would be fraudulent, and I would be left owing whatever I gave to the movers to the bank. I was disappointed that I wasn’t going to get rid of my unwieldy cello anytime soon.

“I think cashier’s checks are being used in a growing number of schemes,” says Tejasvi Srimushnam, staff attorney for the Federal Trade Commission’s Bureau of Consumer Protection. These scams are common on Craigslist and other online marketplaces, and the number of fake check complaints to the FTC and the Internet Fraud Complaint Center doubled between 2014 and 2017 from 12,781 to 29,513, according to a report by the Better Business Bureau.

When I set out to find out why, I suspected that some sort of technological change had happened over the past 10 years that made cashier’s checks easier for scammers to manufacture. Maybe the printers became cheaper? Ink became easier to replicate? Instead, I found that a few federal laws are responsible for failing to contain the potentially disastrous mess of our shared online world.

The number of fake check complaints doubled between 2014 and 2017

In August 1987, Congress voted the Expedited Funds Availability Act into effect. This regulation requires that banks give customers their money from cashed checks after a certain amount of time; for most cashier’s checks these days, this means funds must be available within 24 hours. In effect, this act is a compromise between security and convenience, and gives banks less than a day to verify a check. Banks are also obligated to put most checks through a weeks-long clearing process. Together, these rules put banks in a double bind — they have to get customers the money before they’ve verified the checks.

Cashier’s checks have a particularly fast turnaround because they’re supposed to be safe. They are guaranteed by a bank; they are the debit cards of the check world. When someone orders a legitimate cashier’s check from a bank, they must either pay the full value in cash or have that amount available to be immediately withdrawn from their bank account. Because it’s been paid for upfront, it’s impossible for a cashier’s check to bounce. It’s a great currency for people who know each other but don’t trust each other that much, like landlords and tenants.

Cashier’s checks are not great for people who don’t know each other at all, like two strangers on Craigslist. That’s because there’s always a possibility that they are fake. Usually the scammer gives the victim a check for more than they asked for, and then asks them to pay the extra money to an apparent third party. They have a plausible story for this part: Mary Dean asked me to give the excess funds to the cello movers. There are several other versions of this scam. Maybe a letter comes telling someone they’ve won a lottery but need to pay taxes in order to get their money. Perhaps someone hires a victim as a “secret shopper,” then asks them to use their own funds to confirm the reliability of money transfer services.

They’re great for people who know each other but don’t trust each other that much, like landlords and tenants

“Michael,” a single father from Canada who asked me not to use his real name, fell for an iteration of this fraud. Michael rents out a room in his house to make extra income, and lives in an area with a lot of universities. He’s used to catering to students, many of whom often come from abroad. He wasn’t suspicious when he got an email from someone claiming to need a room while she attended school, but he did grow nervous when she sent him a cashier’s check for $3,400, since the rent was only $700. He decided to let the bank decide.

Michael warned the teller that he thought the check might be fake, and even asked for them to put the money on hold while they verified it, but the bank staff reassured him and immediately gave him the required cash. The supposed student had asked Michael to deposit the cash in another bank account that Michael did not own. Soon after, the original bank said that the check was fake and asked for the money back, putting Michael out more than $2,000. “How are the banks not ready for this?” he says. “I literally went into my bank and said ‘This is fake, I want a hold on it.’ And they weren’t interested in doing that.”

The people who design these scams are professionals, and they are experts at coming up with stories that catch people off guard or garner their sympathies. For example, Mary Dean created a narrative about how her mother was sick and then that she died. I believed her, so I made every effort to be understanding of her increasingly odd behavior. The Canadian renter expected to work with students from other countries and so wasn’t fazed by slightly unusual behavior. “This is what [the scammers] do day in and day out,” says Srimushnam. “Of course they’re going to be good at what they do.”

The key moment happens when the person cashes the fake check. The bank should catch it, right? That is, after all, its purpose. US financial institutions are on track to spend more than $68 billion on cybersecurity between 2016 and 2020, according to a metastudy by the Department of Homeland Security.

Banks use a combination of methods in order to secure checks. Matt Kriegsfeld is in charge of digital banking products at Mitek Systems, the company that creates the technology that banking apps use for mobile check deposits. He explains that most big-bank checks are printed by two companies, Harland Clarke and Deluxe. These businesses communicate frequently with their banks and technology companies like Mitek. Kriegsfeld says that Mitek has more than 40 patents in image processing technology. “We are going down to the pixel level,” he says. He says that tricks like the checkbox that says “For mobile deposit only” are particularly helpful. Banking apps take less than three seconds to visually analyze the checks. They give all the information they find over to banks, which then put the checks through another round of security.

If the cashier’s check was written by a bank, it has to go through a clearinghouse, which is usually operated by the Federal Reserve Board. Even though this system has been largely automated since 2004, it can still take more than two weeks, according to the Better Business Bureau. That means there’s often a gap between when the money goes to the bank customer and the moment it can actually be verified. Cashier’s check scammers take advantage of this uncertainty by asking their victims to somehow return them some money. When the bank finally finds out the check is fake and takes the money from the customer’s account, the con artist will have disappeared, and the victim will be in the red.

To the banks’ credit, their security systems do actually catch the majority of fake checks. This is where the internet comes in: There are just so many of them. There were about $8 billion worth of check fraud attempts in 2016, which cost the bank about $790 million. That’s only about 9 percent. But the web is great at linking potential scammers to lots of other people, and so it’s 9 percent of a huge number. There’s “a lot more opportunities for people to network, a lot more people to connect,” says Srimushnam.

The group most likely to be victims are people in their 20s, followed by small businesses, lawyers, and the banks themselves, according to a report by the Better Business Bureau. Ron Eisenberg, a lawyer from Missouri, likes to keep evidence of attempted fraud and frame it for his own entertainment. He says he has noticed that lawyers have been targeted for the past few years. “I don’t think it’s going to stop,” he says. “It’s so prolific and so common.”

Congress has tried to make check cashing more up-to-date. On October 28, 2003, they signed the Check Clearing for the 21st Century Act into law. It was supposed to help banks handle electronic checks more efficiently and allowed the kind of check deposit technology that Mitek Systems provides. However, it hasn’t eliminated the gap between when a bank customer gets the funds from a cashier’s check and when the bank verifies the check is real.

It’s humiliating to fall for a scam. I caught the fraud before it came to fruition, and I still felt embarrassed. I was also a little nervous. Mary Dean sent me the check and when I wrote saying I was sending it back, she blew up and sent several all-caps emails about how she was going to call the FBI. I wasn’t concerned about these particular threats, but there are a lot of ways an internet stranger who knows your name and email can bother you. The Dr. Frankenstein behind Mary Dean could dox me or just send me endless junk mail.

Srimushnam says he sympathizes with people who have been defrauded and urges them to report their experiences to the FTC. “If a consumer is concerned about a particular actor, complain either to the FTC or USPS,” he says. “These reports are invaluable to us. It’s a big marketplace and we are trying to be a legitimate cop on the beat.”

In the future, I will practice better Craigslist hygiene and only email from the semi-anonymous address they provide. I will remember to delete my email signature to avoid giving out my full name. And if anyone reading wants to buy a cello, it’s still available.

2 million federal workers are poised to get paid parental leave for the first time ever
Trevor Noah’s feud with France over race, identity, and Africa — explained
The US will admit just 18,000 refugees in the next year
The incredibly damning Ukraine texts from State Department officials, explained
Vox Sentences: Who’s in charge in Peru?
How to turn off political ads in your Facebook News Feed