Why Corey Lewandowski is testifying about the Mueller report 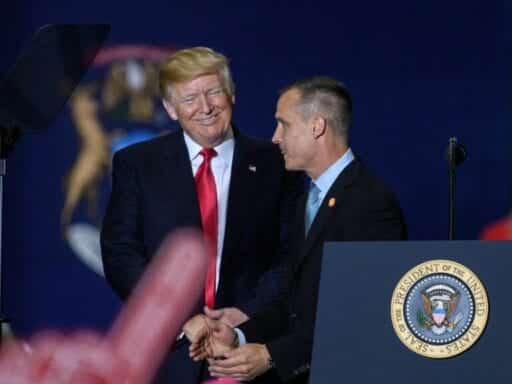 The former Trump campaign manager was involved in one episode of potential obstruction of justice.

Former Trump presidential campaign manager Corey Lewandowski will testify about the Mueller report before the House Judiciary Committee Tuesday in what’s sure to be a circus of a hearing. (It begins at 1 pm ET and you can watch it at this link.)

Lewandowski will be pressed about an episode special counsel Robert Mueller outlined in which President Trump met with him and tried to get him to deliver a message to Attorney General Jeff Sessions — a message aimed at getting Sessions to reverse his recusal and rein in Mueller’s probe.

It was a bizarre incident. Because Lewandowski was a private citizen at the time, it seemed to be an example of Trump trying to circumvent his own White House staff to covertly pressure Sessions. (Remarkably enough, Trump even told private citizen Lewandowski that, if Sessions wouldn’t meet with him, he should tell Sessions he’s fired.)

Mueller’s legal analysis suggested this was potentially an instance of obstruction of justice. However, Mueller decided not to reach a conclusion on whether it, or any other conduct by the president, was actually criminal.

Now, months later, more House Democrats have been pushing for impeaching Trump and the Judiciary Committee is hoping to use this hearing to build momentum for an impeachment investigation. But Lewandowski has made clear his testimony will be a defiant defense of Trump. He’s even signaled he’ll use the hearing to promote his potential campaign for US Senate in New Hampshire (against incumbent Democrat Jeanne Shaheen).

Excited about the opportunity to remind the American people today there was no collusion no obstruction. There were lots of angry Democrats who tried to take down a duly elected President. Tune in. #Senate2020.

Two former White House aides — former staff secretary Rob Porter and former deputy chief of staff Rick Dearborn — were also subpoenaed for testimony. But the White House has taken the (dubious) legal position that, as former advisers to the president, both are immune from compelled congressional testimony. Both have chosen to skip the hearing; if Democrats want to force the issue, they’d have to sue.

Lewandowski, though, never actually served in the White House, which means the Trump administration didn’t even have a thin pretext to argue that he couldn’t testify. Still, though, they are claiming that Trump’s conversations with Lewandowski in 2017 are shielded by executive privilege, even though Lewandowski was a private citizen at the time. This, again, is highly dubious, but it would take a lawsuit and court intervention to change this.

What the Mueller report says about Corey Lewandowski

Lewandowski managed Trump’s presidential campaign from mid-2015 until his ouster in June 2016 (he was pushed out by the now-imprisoned Paul Manafort). He never really ended up becoming a central player in any theories about Russian “collusion.”

However, Lewandowski did receive frequent emails from foreign policy adviser George Papadopoulos describing outreach Papadopoulos was receiving from contacts tied to Russia. For instance, Papadopoulos wrote on April 27, 2016, that he’d “been receiving a lot of calls over the last month about Putin wanting to host [Trump] and his team when the time is right.”

That email was sent one day after Papadopoulos was told by a professor who claimed ties to Russian intelligence that Russia had “dirt” on Hillary Clinton in the form of thousands of emails. However, there’s no evidence that Papadopoulos told Lewandowski about that dirt. (Papadopoulos would later plead guilty to lying to the FBI about his contacts with the professor.)

So Democrats will likely ask Lewandowski whether Papadopoulos told him anything about the email dirt — and he will likely deny it.

But Lewandowski was far more involved in one particular episode of potential obstruction of justice by President Trump that Mueller outlined.

On June 19, 2017, the president met one-on-one with Lewandowski, who was then a private citizen getting into lobbying, in the Oval Office. Trump criticized Sessions and his recusal from oversight of the Mueller probe, and then “asked Lewandowski to deliver a message to Sessions,” per the report. The message was that Sessions should give a public speech saying (per Lewandowski’s handwritten notes):

I know that I recused myself from certain things having to do with specific areas. But our POTUS … is being treated very unfairly. He shouldn’t have a Special Prosecutor/Counsel b/c he hasn’t done anything wrong. I was on the campaign w/ him for nine months, there were no Russians involved with him. I know it for a fact b/c I was there. He didn’t do anything wrong except he ran the greatest campaign in American history.

Translation: Trump was telling Sessions to reverse his recusal, to retake control of the Mueller probe, to publicly proclaim Trump did nothing wrong, and to limit Mueller only to investigating “election meddling for future elections” — that is, not what already happened in 2016 and not obstruction of justice in the time since Trump took office.

Lewandowski tried to arrange a meeting with Sessions soon afterward but Sessions had to cancel it due to a conflict. So, one month later, on July 19, 2017, Trump met Lewandowski again in the Oval Office and followed up, asking if he’d delivered the message. Lewandowski said he’d do it soon. Trump then said that, if Sessions refused to take the meeting, Lewandowski should tell Sessions that he was fired.

Instead, though, Lewandowski passed off the message to Rick Dearborn, the White House deputy chief of staff (who was a former Sessions aide). Dearborn says he never actually delivered the message. So, as with many of Trump’s apparent obstruction attempts, this one seems to have not actually worked.

Soon after this episode, Trump changed tack, openly attacking Sessions on Twitter and hoping to pressure him to resign. Again, this didn’t work; Sessions remained in office for another 16 months. But after the 2018 midterm elections, Trump finally made his move, firing Sessions and appointing Bill Barr to replace him — and to steer the Mueller investigation to its controversial conclusion.