Why coronavirus conspiracy theories have spread so quickly 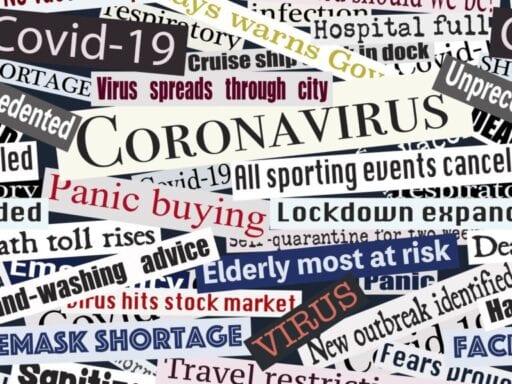 “Conspiracy theories flourish in times of crisis, which is obviously the case here.”

The novel coronavirus pandemic has killed tens of thousands of people and utterly reshaped the global economy. Perhaps unsurprisingly, it has also given rise to numerous conspiracy theories — about the origins of the virus and whom it infects, and even about the virus itself. There are people who believe, for example, that cellular data networks may be spreading the virus (a theory that, as Reason magazine’s Eric Boehm put it, “doesn’t even make sense,” as sound waves do not spread viruses).

Truth be told, a pandemic had all the makings of a petri dish for conspiracies.

“Conspiracy theories flourish in times of crisis, which is obviously the case here,” Karen Douglas, a professor of social psychology at the University of Kent and an expert in conspiratorial thinking, told me. “They tend to surround big events that require big explanations [because] small explanations are unsatisfying.”

But there’s a second piece of the puzzle: Politicians both in the United States and abroad who consistently downplayed the virus, and in some cases, continue to do so. It’s no wonder, then, that as the virus spread, many argued that the risk was being overstated or was even a front for something more nefarious — a globalist government takeover (as a Los Angeles-area man believed, after attempting to derail a train near a naval hospital ship), for example.

Conspiracy theories tell us about ourselves — what we believe or doubt, and what we fear most. The conspiracy theories that surround the coronavirus pandemic are no different, centering on existing concerns about globalization, new technology, and perhaps our most ancient horror: disease. But in the case of Covid-19, conspiracy theorists got an added boost: from political leaders as desperate to believe the conspiracies as they were.

“We just didn’t fucking trust anybody”

Conspiracy theories from QAnon to the ones contributing to anti-Semitic violence nationwide have underlying belief systems that are similarly built. They aren’t created by evidence or even belief, necessarily, but by the desire to believe there must be something more to the events that shape our lives, culture, and politics than accident or happenstance, and even as a means of self-defense.

Where there is confusion, or even pain and tragedy, QAnon, or shootings termed “false flags,” or 9/11 trutherism brings some semblance of order and security. The 9/11 attacks were so horrific that they can’t possibly have happened without President George W. Bush being behind it somehow, orchestrating things behind the scenes. A mass shooting at an elementary school that killed so many small children is so terrible that it can’t possibly have really happened. And the Trump administration must only seem to be enmeshed in constant chaos.

Pandemics are fertile ground for conspiracy theories as people seek to understand not only the disease but the economic and societal impacts the response to pandemics has had on daily life.

Historically, with every plague and pandemic, there have been conspiracy theories to explain their origin and how to potentially stop their progression. Often, those conspiracy theories play on existing concerns and work within cultural contexts. For example, during the Black Death, a 14th-century outbreak of bubonic plague that killed at least 35 percent of Europe’s population, conspiracy theories targeted Jewish people — already the subject of ire and deep concern — as the source of the plague, leading to the torture and murder of thousands of Jews in response. (As anti-Semitism is itself a conspiracy theory, it’s not surprising to see anti-Semitic conspiracy theories arise during the coronavirus pandemic as well.)

More recent pandemics have seen the rise of their own conspiracy theories, ones that formed in response to underlying concerns as much as they did to a virus or disease. “AIDS denialists,” for example — people who believe that HIV does not cause AIDS — were responding not just to AIDS, but to the context of AIDS in the United States of the 1980s, a disease that seemed to kill the most vulnerable and most despised in society with little attention or care from mainstream authority figures. That led some people, already experienced in distrusting institutions that had only served to disadvantage and oppress them, to distrust them even more in the face of a crisis.

As Charlie Anders detailed in the story of one former denialist in Gizmodo in 2015:

So Kovacev was skeptical about a neat and tidy explanation for AIDS—and then he heard that a reputable scientist, Peter Duesberg at U.C., Berkeley, was saying he believed that HIV was a harmless virus, that had nothing to do with causing AIDS. (Duesberg still believes this.) So Kovacev and his friends didn’t know what to think.

“We weren’t denialists,” Kovacev said of his fellow activists at the time. “We just didn’t fucking trust anybody.”

During the H1N1 “swine flu” pandemic of 2009, conspiracy theories based in existing concerns about globalization and the pharmaceutical industry gained credence worldwide. For example, while some in the United States argued that undocumented migrants were being used by “terrorists” to spread the virus within American borders, some in Mexico and in Central and South America argued that the virus was purposely being spread by American authorities to benefit pharmaceutical companies:

On April 27, 2009 the Chilean newspaper El Ciudadano, published an article on the origins of the “swine flu,” the virus’ colloquial name—which asked who had benefited from the emergence of the disease (Anonymous, 2009). The report itself was based on internet reporting in Spanish from California, which referred to accusations that the U.S. biodefense agency was working to “weaponize” avian influenza and that former U.S. Defense Secretary of Defense Donald Rumsfeld stood to benefit from the outbreak. This article pointed to Rumsfeld’s long role with Gilead Laboratories in California, which manufactured Tamiflu, a possible treatment for highly pathogenic avian influenza (HPAI). The article concluded by referencing U.S. biological warfare tests that had been conducted upon unsuspecting populations in the 1950s and 60s (Anonymous, 2009). These articles circulated widely outside of Mexico, where conspiracy “theorists had a field day” with information about Gilead Laboratories (Ainsworth, 2009).

Coronavirus, too, has its own context — a general lack of trust in institutions, including the media, and in authority figures, including the very authorities tasked with asking millions of people to shut down their businesses and lives to stop the virus from spreading.

But it was authority figures who added an extra element to conspiratorial thinking taking place around coronavirus in the United States and elsewhere. Joseph Uscinski, a political scientist at the University of Miami who specializes in conspiracy theories, told me that rather than coronavirus itself being the fertile soil for conspiracy theories, “I think the bigger argument would be that because you had a president and some other political elites and a lot of celebrities pushing conspiracy narratives, you probably are getting more people buying into it than you otherwise would have.”

“We are not being told the truth”

Uscinski told me that we could think of conspiratorial views as a “constant” for some people, one that was unlikely to change regardless of current events. “Everyone to one degree or another has a worldview in which conspiracies dictate events and circumstances,” he said. “Some people have that worldview a lot. Some people have very little.” And so far, he’s found in his research that many of the people who share coronavirus conspiracy theories are people who already have a conspiratorial worldview.

But what differs with coronavirus is how political elites are responding to the virus — often, by encouraging new conspiracy theories that downplay the severity of the pandemic. “Imagine if [President Ronald] Reagan had come out in the ’80s and said that AIDS was sent here by Moscow, or didn’t really kill people,” Uscinski said, “That would be really, really bad because our political leaders can influence a lot of people and that winds up taking the message beyond just the conspiracy-minded people to those who trust that political leader.”

And that has been borne out in the United States, where some of President Trump’s biggest supporters followed him as he downplayed the virus (doing so, in his telling, because he’s a “cheerleader for the country”) and invented theories that the coronavirus was no worse than the common cold but was being wielded as a cudgel to take down down Trump (some of Trump’s supporters have pushed back on this conspiracy theory).

On social media sites, some Trump supporters have urged their followers to film their local hospital parking lots to prove that they were not being inundated by coronavirus patients.

But America isn’t alone. In Brazil, President Jair Bolsonaro described coronavirus as “a little flu” and told reporters in March that the virus was largely a media invention, saying, “During the past year, obviously, we have had moments of crisis. A lot of that is fantasy. And coronavirus, which is not all the mainstream media makes it out to be.” And in Mexico, President Andrés Manuel López Obrador told reporters in mid-March that he was using amulets as protection against the coronavirus, also arguing that “not allowing corruption” prevents the disease.

Douglas told me the reason for downplaying coronavirus was fairly simple: “Downplaying the virus is a way to attempt to deal with the immediate existential threat, but it also serves the purpose of allowing individuals to carry on as normal. A lot of the behaviors that people need to observe to manage the spread of the virus are unpleasant (e.g., staying indoors, not seeing friends), and denying the problem also means that people can avoid these actions.”

Arguing that coronavirus is overblown, or a media invention, also permits those who believe in these theories to feel they are part of an exclusive club with secret knowledge, fulfilling the need we all have to feel as if we understand what’s really going on. As Douglas told the New York Times, “If you believe in conspiracy theories, then you have power through knowledge that other people don’t have.”

Conspiracy theories function as a self-soothing mechanism, an effort to make what doesn’t make sense sensible. And during the coronavirus pandemic, conspiracy theories have become an international effort, used by governments and individuals alike to evade blame for thousands of deaths and foist it on an easily available “other.” Meanwhile, the toll of the pandemic continues to grow.