Why Decision Desk called Pennsylvania, and the presidential race, for Joe Biden 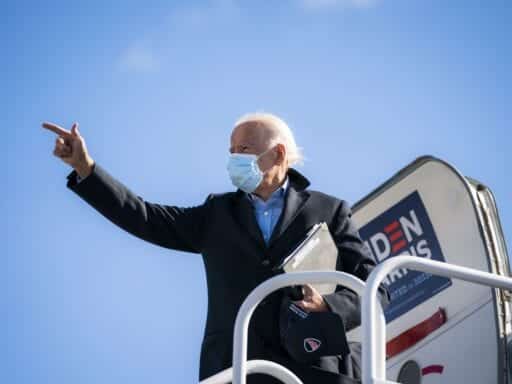 “It became pretty obvious that as the remaining votes across the state and in Philadelphia are counted, Biden’s lead will continue to grow.”

On Friday morning, Vox’s election-calling partner, Decision Desk, called that Joe Biden has won the state of Pennsylvania — and that he therefore has won enough electoral votes to win the presidency.

Other election-calling operations, such as the Associated Press and those at the major television networks, have not yet done the same. But it’s quite possible they will do so soon.

“The race is over, as far as our call is concerned, because of the vote totals coming out of Philadelphia this morning,” Drew McCoy, the president of Decision Desk, tells me in an interview. “It became pretty obvious that as the remaining votes across the state and in Philadelphia are counted, Biden’s lead will continue to grow.”

That’s for a few reasons. First, according to the state, there are at least 30,000 mail ballots in Philadelphia remaining to be counted (and potentially more in-person Election Day votes there as well). “Biden’s consistently winning Philly’s vote with 80-plus percent, sometimes as much as 87 percent in some drops,” McCoy says. On top of that, there are another 30,000 mail ballots in Allegheny County that remain to be counted, and mail ballots there have also gone heavily to Biden so far.

Decision Desk HQ projects that @JoeBiden has won Pennsylvania and its 20 electoral college votes for a total of 273.

Joe Biden has been elected the 46th President of the United States of America.

“But it’s not simply just the locations or the numbers, it’s the types” of votes remaining to be counted, McCoy continues. That is: What’s left to count are predominantly mail ballots. And so far, mail ballots in Pennsylvania have favored Biden — even in pro-Trump areas.

Considering all that, McCoy says, he is “confident” that when all is said and done, Biden’s lead in Pennsylvania will be above the 0.5 percent margin that would trigger an automatic recount. He estimates Biden will end up winning the state by “probably in the 1 to 2 percent range,” but adds “there’s some margin of error in that.”

The call of Pennsylvania for Biden is notable, because Decision Desk has not called either Georgia or Arizona — two other states where Biden leads.

“Georgia flipped overnight, but it’s not simply a case of a trailing candidate suddenly leads and we can make a call,” McCoy says. “It’s a very different situation in Georgia.”

The reason: Pennsylvania has tens of thousands more ballots to be counted that we have every reason to expect will only expand Biden’s currently small lead. But in Georgia, the count is nearly — but not quite — done, and Biden’s lead is even smaller (a little over 1,000 votes).

McCoy points out that thousands of overseas and military ballots in Georgia could still remain, as well as provisional ballots. (These are ballots for which there’s some sort of problem with the voter’s information: “Sometimes they’re counted, sometimes they’re not; they’re going to have to be adjudicated,” McCoy says.)

“There’s a real possibility the state could swing back to Donald Trump,” McCoy says. “So that’s not a state we’re going to call. It’s a question about what’s out there.”

Then there’s Arizona, where Biden currently leads by about 1.5 percentage points, and which Fox News and the Associated Press called for Biden days ago. Decision Desk has not yet done the same.

“Arizona is a really interesting case,” says McCoy. “What we have counted obviously benefits Biden, but as we’ve seen over the course of two days, the margin has shrunk somewhat. It’s simply a question of wanting to see more. We know that there are substantial ballots out, but they’re different. Maricopa County is not the same as some of the other counties in the state.” (I spoke to McCoy at 10 am Eastern, before Maricopa County released updated vote totals Friday morning.)

An issue here is that unlike in other states, Republicans had a history of voting by mail and many chose to do so — but many also seem to have returned their ballots late, and those are being counted now. This is simply not a dynamic evident in Pennsylvania.

McCoy says the numbers in Arizona “are right on the edge, and we think it will be a close race, so given that, we are not in a rush to call it.” He adds that the calls for Arizona from Fox and the AP are “certainly defensible” and that “these folks are professionals,” but that “applying our benchmarks, our tools, we’re saying we need to see more.”

Why recounts are very unlikely to swing the election to Trump

With Georgia and Arizona still uncalled, Biden needs to hold on to both Pennsylvania and Wisconsin to be sure of topping the 270 electoral votes he needs for victory. (Michigan looked close on election night, but the outcome is no longer in question, Biden leads by 2.5 percentage points — nearly 150,000 votes.)

As mentioned, McCoy and Decision Desk feel “confident” that Biden’s final margin of victory in Pennsylvania will be above the 0.5 percent that would trigger a recount. But what about Wisconsin, where Biden currently leads by 0.63 percent of the vote, and where the Trump campaign has said it intends to ask for a recount? (The campaign has the legal right to request this, though state law says the campaign must pay for it if the final margin is outside 0.25 percent.)

The problem for Trump, McCoy says, is that Biden’s lead in Wisconsin is about 20,000 votes. “That would be an astronomically large number to overturn in a recount.” Asked whether such a thing has ever happened, McCoy responded, “Not that we could find.”

Generally, according to McCoy, if a race is decided by 1,000 votes or fewer, that’s about the “outer reach” of the sort of shift we might expect during a recount. In Wisconsin specifically, the presidential race was recounted in 2016 and the outcome only shifted by 131 votes. (Notably, even Republican former Gov. Scott Walker tweeted that “20,000 is a high hurdle” to overcome in a recount.)

Again, Georgia is a different story — Biden’s lead there is just over 1,000 votes, too close to be totally comfortable. But Biden’s lead in Wisconsin appears large enough to withstand a recount, and his lead in Pennsylvania is highly likely to end up there too.

The best movies of 2020, so far
Missouri could lose its last abortion clinic. Its fate will be decided this week.
This Columbus Day, a reminder Christopher Columbus was “a murderous moron”
China has censored the Archive of Our Own, one of the internet’s largest fanfiction websites
Is Watchmen too confounding for its own good?
The Supreme Court shut down an attack on Obamacare in the most dismissive way possible