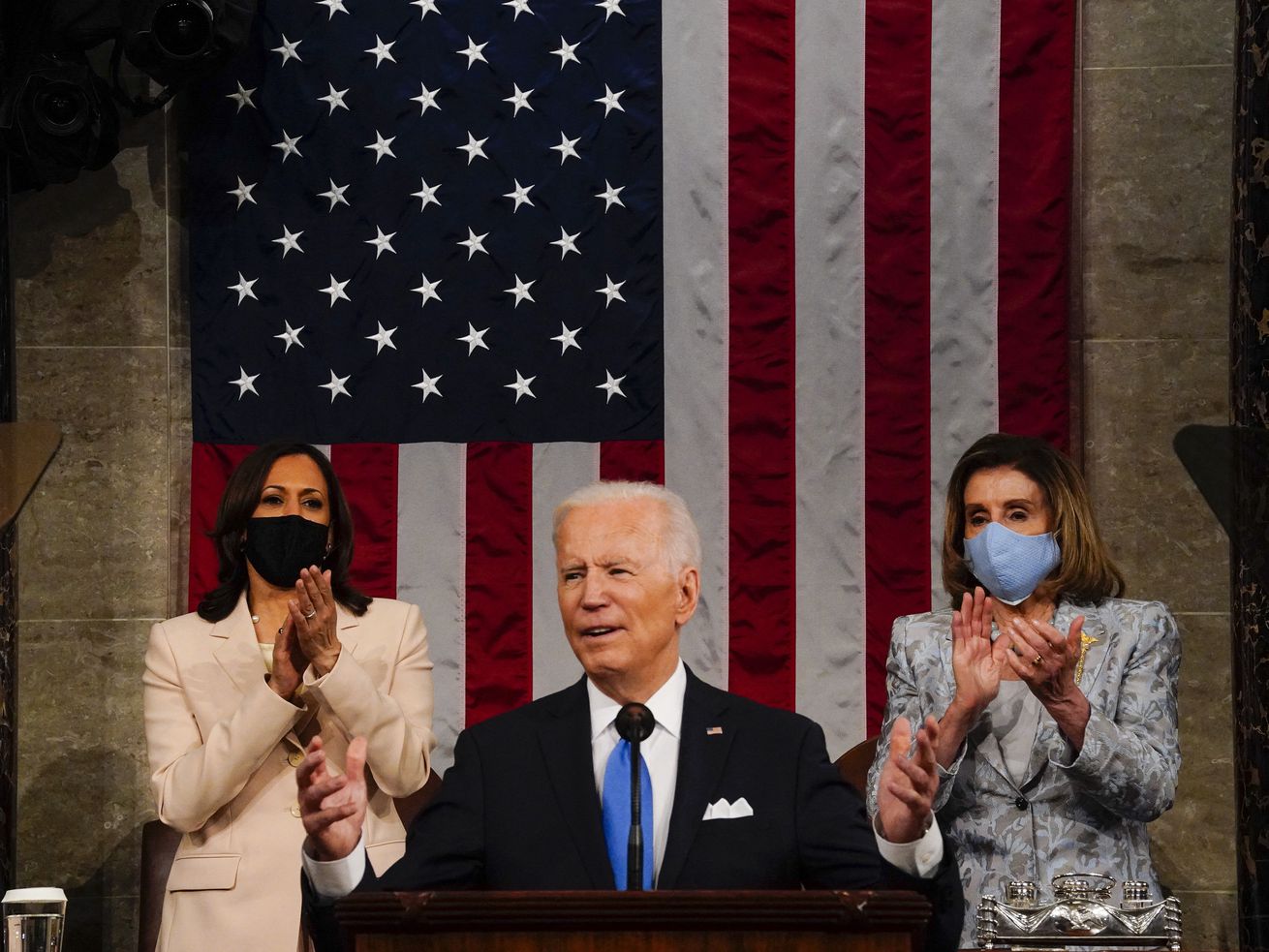 The Biden agenda has run into the hardest roadblock in health care: How do you pay for it?

As Joe Biden closed in on the Democratic Party’s nomination, with only Bernie Sanders still running against him, part of his pitch was that he knew how he’d pay for his proposals.

“The fact of the matter is, everything I call for I pay for,” Biden said in his final debate with Sanders on March 15, 2020.

But in practice, an $800 billion plan may be almost as politically daunting as a $32 trillion one.

And that is forcing Biden to aim lower still.

Right now, in his proposed American Families Plan, Biden is asking Congress for $200 billion to expand the Affordable Care Act’s subsidies for health insurance premiums. The expansion already passed in the American Rescue Plan but expires after two years; the new proposal would make them permanent. The public option is nowhere to be found.

Meanwhile, the payment plan Biden proposed during his campaign and in his debate with Sanders — an increased tax on capital gains — will probably be used to pay for other parts of the Biden agenda, while a $450 billion savings proposal, favored by most Democrats in Congress, that would allow Medicare to directly negotiate drug prices with pharmaceutical companies was also left out of the Families Plan. Congressional Democrats were urging Biden to include the drug price idea and use the savings to pay for coverage expansions, such as lowering Medicare’s eligibility age.

It’s hard not to see one as related to the other. Biden’s plans for expanding health coverage — earlier Medicare eligibility, a public option — were modest compared to Sanders’s. But their fate, even as Biden proposes trillions in other new spending, shows that health care programs still have to pass a difficult test: They need to at least partially pay for themselves.

For decades, the norm has been that when Congress wants to pass a new expansion of health coverage, it will find the money to pay for at least some of that expansion from the health care industry, whether in the form of new taxes or spending cuts. Health care funds health care.

But that creates a huge political problem: The health care industry can block new reforms not by opposing the reforms themselves but by campaigning against the cuts or taxes used to pay for them. Doctors, hospitals, and health care companies retain a lot of influence in Congress; every congressional district has a hospital, as lobbyists happily point out.

So even as their ambitions for health care grow, as demonstrated by Biden’s embrace of the public option, Democrats find themselves caught in this trap.

Nobody knows for sure why Biden dropped the Medicare negotiations proposal from the American Families Plan, even as he called for lawmakers to pass it this year on a bipartisan basis — an unlikely prospect — in his first address to Congress. The reporting has been circumspect.

But we do know the pharma industry has a massive war chest, refilled every year by member fees, and has promised to deploy it if any major drug pricing reform started moving through Congress. Drug manufacturers also enjoy their best public approval in years after delivering Covid-19 vaccines in record time.

“Why go after the very industry that basically is our lifeline out of the pandemic?” Monk said.

This is how the trap closes: When health care must pay for health care, the health care industry must take a hit in order to cover more people. That is something the industry’s immense lobbying apparatus usually wants to stop, and given its influence in the halls of Congress and in the White House, that can make anybody’s health care plan — whether it costs $800 billion or $32 trillion — a nonstarter.

Biden avoided this problem with the initial two-year expansion of the ACA subsidies in the American Rescue Plan by mostly not paying for it. But even in this age of deficit doves, the $200 billion to make that expansion, or any other major health care expansion, permanent would need to be paid for. That presents a massive political problem, even for Biden’s more modest (compared with Sanders’s) proposals.

“It was quite easy to get the health care industry on board for temporarily increasing ACA premium help without any budgetary offset to pay for it, as was the case in the American Rescue Plan,” said Larry Levitt, executive vice president for the Kaiser Family Foundation. Levitt framed that bill’s health care provisions as “all winners, no losers.”

“As soon as there starts being pressure to pay for health care enhancements,” he continued, “it becomes a zero-sum game with losers as well as winners.”

If Democrats are serious about expanding public programs, they can’t count on the health care industry as allies

The health care industry can be persuaded that the trade-off is worth it. It’s happened before.

The platonic ideal of this framework is the ACA itself, the 2010 law Biden says he wants to build on with this subsidy expansion and (eventually) a public option. About 80 percent of the ACA was covered by spending cuts (for Medicare payments to providers, for example) or new taxes (various new levies on pharma and health insurers and medical devices) targeted to the industry.

The industry bought into the law and didn’t oppose its passage. It took the deal that is at the heart of this long-held tradition: The coverage expansion would mean more paying customers. It might take a trim in payment rates or on new taxes, but it’d make up for it with more volume. And, as it turned out, more than 20 million people were covered by the law.

But the industry may not be willing to make the same kind of bargain with Biden because his proposals don’t have the same appeal. The Medicare expansion is opposed by many hospitals and doctors — Medicare pays lower rates than private health insurers; more people on Medicare means less reimbursement for them.

The industry opposes the public option, which would presumably set rates lower than private insurance so it could charge cheaper premiums, for the same reason. Considering more than half of America’s uninsured already qualify for Medicaid or the ACA, the public option is less a device for expanding coverage than a way to drive down health care costs. And that is exactly why the health care industry would fight fiercely to stop it.

The Biden administration still can, and has, taken steps to expand health coverage. An additional 4 million people qualify for ACA subsidies since Biden signed the American Rescue Plan into law. Nearly 1 million people have signed up for insurance during a special open enrollment period Biden started shortly after taking office.

The administration is also bound by the rules and politics of the Senate. A public option may not be permissible under the “budget reconciliation” rules that allowed Democrats to move some legislation without any Republican votes. Some moderate Senate Democrats may be less enthused about the public option or even a Medicare expansion than some of their peers who are more progressive.

But America still has the highest uninsured rate in the developed world and the highest health care costs. So long as the health care industry wields a veto pen over any plan that would cut into its profits to address those problems, little is going to change.

Democrats will have to find a way to escape this trap.