Why Democrats are holding out for more comprehensive stimulus 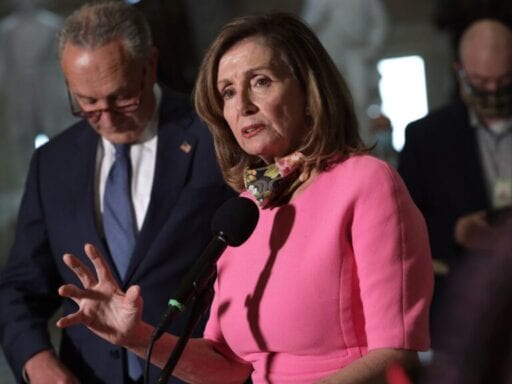 They don’t think Trump’s executive actions come close to covering what’s needed — and they have the leverage to push for more.

President Donald Trump waded into stimulus discussions this weekend, signing a bevy of executive orders meant to mitigate the economic fallout from Covid-19 and put pressure on Democrats.

Democratic lawmakers, however, haven’t been deterred by his actions, which they’ve deemed “paltry” and “narrow.” Instead, they’ve remained steadfast in their position on the next stimulus bill, a measure Republican opposition previously hindered progress on for months.

Recently, the expiration of the enhanced unemployment insurance (UI) program has thrown the need for more aid into sharp relief, renewing pressure on both parties. Given the dynamic in Congress and the context of this fall’s elections, experts say Democrats have the leverage to keep pushing for a more comprehensive proposal that could help address significant gaps left by Trump’s actions.

As of this week, Congress is still at an impasse: While Democrats have urged more funding for expanded UI, Republicans have been reluctant to maintain the benefit that gave more than 30 million unemployed people $600 per week above what they received from their state unemployment programs. Instead, the GOP has proposed a smaller long-term benefit, as well as short-term extensions of the existing program.

The two parties, too, continue to differ significantly on the scope of the bill and the degree of support it will provide for struggling states and other overwhelmed social insurance programs such as food aid.

Trump’s executive actions — to extend UI benefits, defer payroll taxes, and freeze student loan payments — attempted to shift the pressure to act off Senate Republicans, a number of whom are up for reelection in November. But with the exception of the measure on student loans, his efforts are widely viewed as insufficient and difficult to implement. It could be weeks, for example, before anyone sees the UI assistance he’s proposed, if states agree to implement it, and the funding could run out quickly.

As a result, Congress is still seen as playing a key role in approving more substantive support, though it’s unclear whether the two parties will actually be able to overcome their differences. On Monday, talks between negotiators were at a standstill as both Democrats and Republicans pushed the other party to compromise.

“I hope saner voices in the Republican Party will prevail and say, ‘Sit down with Pelosi, sit down with Schumer, and meet them in the middle, for God’s sakes,’” Senate Minority Leader Chuck Schumer said Monday during an appearance on Morning Joe. “That’s what we’re willing to do. And we’ve said it: We’re waiting for them to come back and say yes.”

Treasury Secretary Steven Mnuchin, one of the chief negotiators for the White House, called on Democrats to adjust their demands. “If we can get a fair deal, we’re willing to do it this week,” he said in a CNBC interview on Monday.

Negotiations over both a broader package and any short-term UI extension have stagnated thus far. And while Republicans have argued that Congress could approve a short-term UI bill for now, Democrats emphasize that doing so would mean the GOP would likely walk away without passing more comprehensive stimulus.

In a press conference on Friday, Pelosi emphasized that Democrats were willing to compromise, noting that she offered to reduce their more than $3 trillion proposal by $1 trillion, if Republicans were willing to increase their $1 trillion one by a comparable amount. Republicans rejected the offer, according to Pelosi, who cited the disagreement as a sign of how the GOP has stalled progress. Repeatedly, Democrats have emphasized they’re interested in backing a bill that matches the scale of the current problem.

At this point, Democrats have the leverage to keep pushing for a more generous package: Since the Senate Republican conference is split, any bill will need a solid chunk of Democratic support in order to pass, giving the party more sway to determine what it includes. Additionally, experts see Republicans bearing more of the electoral fallout in November’s elections if the economy continues to struggle, meaning they should be more open to a potential deal.

Democrats have the numbers in Congress

A key reason Democrats aren’t backing down is that the numbers in Congress are on their side.

As Senate Majority Leader Mitch McConnell has emphasized repeatedly, his conference is currently fractured, with as many as 15 to 20 Republicans poised to vote against any new stimulus, including the HEALS Act, the piecemeal counterproposal Republicans rolled out two weeks ago. “If you’re looking for total consensus among Republican senators, you’re not going to find one,” McConnell said last Tuesday.

That split means that Republicans will need substantial Democratic support for any compromise to pass the Senate. Were the 53-person Republican conference to stay united, they would typically require seven Democrats to join them in order to avoid any filibuster and approve a bill in the upper chamber. Because of the anticipated GOP defections, they’d likely need a much higher number to do so on this legislation.

Since the 2018 midterms, Democrats have been able to use their majority in the House as a key pressure point in negotiations about the government shutdown and earlier stimulus packages. Due to the divides in the Senate GOP conference this time around, they have even more leverage in the upper chamber.

Republicans are set to bear more of the political backlash, for now

In addition to the advantage they have in Congress, Democrats are also set to face less political backlash than Republicans are — for now. That dynamic enables them to push the GOP to consider a more comprehensive package, since it’s in Republicans’ political interest to take action on the matter as well.

Because they are the party in power in both the White House and the Senate, Republicans are seen as the ones who are most likely to get the blame in this November’s elections if Congress doesn’t approve more stimulus and the economic fallout persists, experts say.

“Voters are likelier to hold the incumbent presidential party more responsible for the state of the economy, and the country as a whole,” says Kyle Kondik, the managing editor of Sabato’s Crystal Ball at the University of Virginia. “From a purely political perspective, Republicans should have more incentive to stimulate the economy than the Democrats.”

Recent polling, after all, shows that a majority of voters on both sides of the aisle support additional stimulus. A Reuters/Ipsos poll fielded in mid-July found that 76 percent of voters back an extension of enhanced weekly UI. Vulnerable Senate Republicans, as well as Trump, could see serious electoral fallout in November if Congress doesn’t act and the economy is still struggling.

“Depending on how popular stimulus is in some of these states, how many people are fearing unemployment, it can certainly cost votes for Republicans” if nothing gets done, Brian Riedl, a senior fellow at the Manhattan Institute, previously told Vox.

Democrats, too, could face some of that blowback if this impasse continues, though they have the advantage of being able to point to actions they’ve already taken. This past May, Democrats passed the HEROES Act, their attempt at another round of stimulus, which would extend enhanced UI through the end of January and provide more than $900 billion in funds to state and local governments.

“I think Democrats should feel like they are in a pretty good position right now,” says Jim Manley, a staffer for Harry Reid during his tenure as Senate majority leader. “The speaker came down and Republicans refused to make a commensurate move.”

The ongoing impasse between the parties, though, means that millions of Americans on unemployment insurance are waiting to see what comes next, even as many have already seen a sharp drop in their weekly benefits.