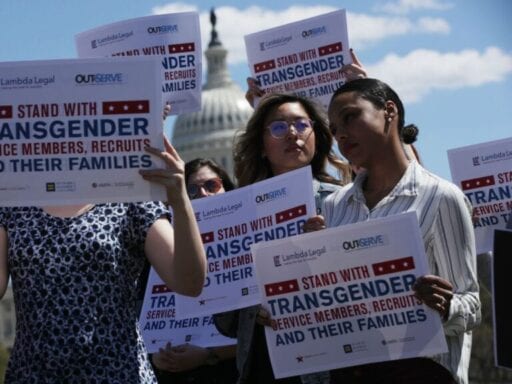 Share
Loading...
Activists participate in a rally at the Reflecting Pool of the U.S. Capitol April 10, 2019 in Washington, DC to rally against the transgender military service ban. | Alex Wong/Getty Images

The House’s first version of an annual defense policy bill reversed the ban. But the final version they just passed? It doesn’t.

After two years of public condemnation, House Democrats finally had a chance to end President Donald Trump’s trans military ban. Instead, they chose to negotiate away what was likely their best opportunity to do so.

The House voted to pass the 2020 National Defense Authorization Act on Tuesday without a key provision from earlier versions of the legislation that would have lifted the controversial ban on trans servicemembers. While Democrats were able to notch a win on paid family leave for about 2.1 million federal employees in the annual “must-pass” bill that outlines policy and authorizes funding for the Pentagon and other national security functions, they ended up capitulating on other key issues.

Democrats had previously pushed back on the ban, which bars trans troops from transitioning and forces new recruits to serve in the role of their sex assigned at birth. But given that they didn’t hold the majority in either the House or Senate when last year’s NDAA was being drafted, their amendments never made it into either chamber’s bill — let alone the final version that became law.

With the majority for the first time since Trump came into office, Democrats in the House passed their version of the NDAA earlier this summer, and included in that legislation was an amendment from Rep. Jackie Speier (D-CA) that not only would have overturned the trans troop ban, but would have banned discrimination against LGBTQ servicemembers and their families altogether. Ten House Republicans joined with their Democratic counterparts to vote for the “Harry Truman amendment,” so-named in honor of the former president’s 1948 executive order desegregating the military.

But when House and Senate negotiators sat down to iron out differences between each chamber’s version of the bill, Republicans insisted on removing the provision. Speculation that the House provision would be dropped grew in late October when the conference committee hit an impasse and the idea of a “skinny” bill was proposed by Senate Armed Services Committee Chair James Inhofe (R-OK) in order to clear the legislation in both chambers.

“I’ve been told consistently over the course of the last two or three months that I just have to negotiate harder,” Smith said at the American Enterprise Institute on Thursday, according to Roll Call. “I was like, ‘Can I do that? How does that work exactly? Can you spell that out to me? Do I, like, hold my breath? Do I, like, physically attack?’ They are where they are, okay? And you know, you have to respect that.” Smith’s office did not return a request for comment from Vox.

LGBTQ civil rights advocates blasted House Democrats this week for giving in on the military ban in the NDAA.

“It is unconscionable that thousands of honorably serving transgender service members and their families will continue to live under the threat of discharge simply because of who they are,” read a joint statement by several LGBTQ advocacy groups, including the Human Rights Campaign, the National Center for Transgender Equality, the National Center for Lesbian Rights, and the ACLU. “This ban is based on bias, not evidence, and is opposed by the American people, military experts, and elected officials across the political spectrum.”

The administration has been engaged in a government-wide effort to roll back transgender rights since the very earliest days of Trump’s presidency, including revoking an Obama-era guidance for schools to better accommodate trans students, proposing a rule to allow shelters to house trans homeless people according to their assigned sex at birth, a proposed rule to repeal health care non-discrimination protections for trans patients, and of course, the military ban.

Nearly every presidential candidate in the Democratic Party’s primary has vowed to immediately roll back the ban should they win the White House next fall, but in the meantime, the ban is starting to affect US troops.

Earlier this year, the Supreme Court lifted several stays on the ban, allowing the Defense Department ban to go into effect while several lawsuits work their way through the federal court system. While some analysts took the high court’s decision as a signal for how it might decide should one of those cases end up at the Supreme Court, it’s difficult to predict the outcome.

While the trans military ban is deeply unpopular with everyday Americans and has received near universal condemnation from Democrats, the failure to prioritize it in NDAA negotiations means the ban will remain in effect until next year’s negotiations — or, as is more likely the case, the Court decides to take it up, or a Democrat wins the White House.

According to advocates, the NDAA was always going to be the easiest way for Democrats to force through a lift on the ban, as I explained earlier this year for Rewire.News:

If, for example, the House attached the amendment to their version of the NDAA, and the Senate didn’t, the bill would be finalized in conference committee between the two chambers to produce a final version for each to vote on. If Democrats hold firm, they could force Senate Republicans to vote against authorizing the military in order to block the amendment. Should the final bill then clear the Senate with the amendment, President Trump could be painted into a politically impossible corner.

“The president would be forced to either sign it or shut down the military,” said [National Center for Transgender Equality executive director Mara] Keisling.

With the NDAA behind them for another year, there remain few other options for lifting the ban before the 2020 elections. A symbolic bill condemning the military ban, which encouraged but didn’t force the Department of Defense to not implement the ban, passed the House in March of this year before dying in the GOP-controlled Senate.

The Equality Act, a comprehensive LGBTQ civil rights bill that was passed in the House in May this year, would roll back the discriminatory ban, but it currently sits on Senate Majority Leader Mitch McConnell’s desk and isn’t expected to be brought up for a vote anytime soon. A potential compromise LGBTQ rights bill which would lift the ban was introduced in the House by a small group of moderate Republicans last week, but has struggled to pick up support from religious conservatives or LGBTQ rights groups thus far.

It’s likely that the fate of the military ban will be decided, like so many other key trans issues, in the next presidential election.

Rudy Giuliani’s rambling new statements on Michael Cohen and the Trump Tower meeting, decoded
Big tech companies back away from selling facial recognition to police. That’s progress.
AI poses risks, but the White House says regulators shouldn’t “needlessly hamper” innovation
Netflix’s To All the Boys I’ve Loved Before might be the best teen romance of the decade
Pelosi announces impeachment managers for Trump’s trial
The best things to eat and drink to fight wintertime dread