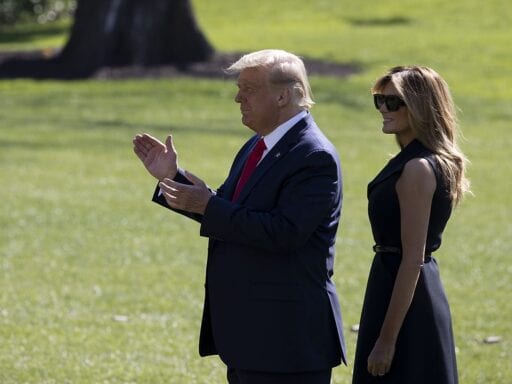 If Trump thinks struggling to answer Lesley Stahl’s basic questions speaks well for him, he should probably think again.

On Thursday, President Donald Trump went ahead and preemptively published the footage of his interview with Lesley Stahl that will air on 60 Minutes this weekend. It’s hard to imagine how he thought doing so would reflect positively upon him.

Trump posted the Stahl interview footage on Facebook below a caption that read, “Look at the bias, hatred and rudeness on behalf of 60 Minutes and CBS.” Oddly, he compared Stahl’s performance favorably with the moderator of the upcoming final presidential debate, Kristen Welker, writing, “Tonight’s anchor, Kristen Welker, is far worse! #MAGA” (Trump has spent the better part of a week preemptively attacking Welker).

But if the idea is supposed to be that Stahl was trying to do a hit job on Trump, the footage doesn’t bear that out. The video Trump posted begins with Stahl asking him, “You’re okay with some tough questions?” You’d probably expect the president of the United States to say that’s no problem, but instead, Trump said, “No, I’m not.”

Trump thinks this looks *good* for him!!! pic.twitter.com/fhfPUnpFwn

Nearly 40 minutes later, the interview ended on a similar note, with Trump whining to Stahl that “your first question was, ‘this is going to be tough questions’ … but when you set up the interview, you didn’t say that. You said, ‘oh, let’s have a lovely interview.’ And here’s what I do say: You don’t ask Joe Biden [tough questions].”

Stahl replied by pointing out she hasn’t recently interviewed Joe Biden, but Trump admonished her that her opening statement “is no way to talk.” Seconds later he walked away from the interview in a huff.

Trump’s 60 Minutes interview with Lesley Stahl ended with him whining about her asking him tough questions and storming out in a huff pic.twitter.com/zuiwYpKnFb

Given all this, you’d probably think Stahl grilled Trump with a series of hard-hitting questions. But the content of the interview consisted of Trump getting offended when Stahl made a number of obvious (albeit unflattering for him) observations.

Perhaps the most substantial exchange of the interview came when Stahl asked Trump about his administration’s effort to get the Supreme Court to repeal the Affordable Care Act during a pandemic that has made having access to health care more important than ever.

Stahl pointed out the obvious — that Trump has for years been promising a replacement plan for the ACA that still hasn’t materialized — but Trump replied by insisting that his plan is “going to be announced very soon.”

“It’s going to be announced very soon” — Trump is still out here touting his fake health care plan that he said would be announced in 2 weeks 3 months ago. Completely beyond parody. pic.twitter.com/UJuVbVTjcm

Later, in an unfortunate soundbite, Trump admitted to Stahl that he hopes the Supreme Court overturns the ACA — a ruling that could cost more than 20 million people their health insurance.

“I hope that they end it. It’ll be so good if they end it,” Trump said, in an exchange that seemed tailor-made for Joe Biden ads.

“I hope that they end it. It’ll be so good if they end it.” — here’s Trump saying he hopes SCOTUS strikes down the ACA during a pandemic pic.twitter.com/1bTonnA2YJ

Perhaps in awareness that this part of the interview didn’t go well for him, on Wednesday the president tweeted photos of White House Press Secretary Kayleigh McEnany presenting Stahl with reams of paper meant to demonstrate “the many things” the administration has done on health care — as if the mere bulk of a stack of papers proves something rather than what’s actually written on it.

Kayleigh McEnany presenting Lesley Stahl (@60Minutes) with some of the many things we’ve done for Healthcare. Lesley had no idea! pic.twitter.com/8bfIxkFiXt

If Trump making stuff up to defend his (lack of) a health care plan was bad, his defense of holding pandemic rallies that make a mockery of basic public health guidelines was even worse. When Stahl pointed out to him that many people at his rallies don’t wear masks and aren’t social distancing and asked him about “the message he is sending,” Trump responded by insulting her and lying.

“You know, you’re so negative … these are the biggest rallies we have ever had,” Trump said (falsely), prompting Stahl to note, “I can’t believe after what happened in the Rose Garden here at the announcement, with all of the people getting sick, that you are not being more strongly encouraging about wearing masks.”

“What’s your next question?” Trump eventually replied, trying to change the topic.

Grilled by Stahl about the irresponsibility of holding huge rallies that make a mockery of public health precautions during a pandemic, Trump has no defense other than insulting her and lying pic.twitter.com/UowM4rRrjE

Perhaps Trump’s most brazen lie came when he insisted to Stahl that he hasn’t encouraged “lock her up!” chants at his recent rallies. In fact, encouraging chants of that sort aimed at Hillary Clinton, Gretchen Whitmer, Ilhan Omar, and others has become a staple of Trump’s stump speeches.

Trump to Lesley Stahl: “I don’t encourage them” to say lock her up (re Hillary Clinton).

Who you going to believe. Trump or your own lying eyes? https://t.co/4j5koxYrFR

Trump’s recent interviews with real journalists have uniformly been disasters

The first indication the 60 Minutes interview didn’t go well for Trump came on Tuesday, shortly after filming of it ended at the White House, when Trump posted a bizarre 5-second gotcha video to his Twitter account above a caption that read, “Lesley Stahl of 60 Minutes not wearing a mask in the White House after her interview with me. Much more to come.”

Lesley Stahl of 60 Minutes not wearing a mask in the White House after her interview with me. Much more to come. pic.twitter.com/0plZG6a4fH

Shortly thereafter, news broke that Trump “cut the interview short and then declined to participate in a ‘walk and talk’ segment with Ms. Stahl and Vice President Mike Pence,” as the New York Times put it.

Then, on Wednesday, Trump tweeted, “I am pleased to inform you that, for the sake of accuracy in reporting, I am considering posting my interview with Lesley Stahl of 60 Minutes, PRIOR TO AIRTIME! This will be done so that everybody can get a glimpse of what a FAKE and BIASED interview is all about … Everyone should compare this terrible Electoral Intrusion with the recent interviews of Sleepy Joe Biden!” He also brought up the Stahl episode during a rally speech that night in Erie, Pennsylvania.

“You have to watch what we do to 60 Minutes. You’ll get such a kick of it. You’re gonna get a kick out of it. Lesley Stahl is not gonna be happy.” — Trump pic.twitter.com/EPUcAL7uiA

That preemptive framing echoes the president’s recent pattern of attacking debate moderators and other journalists for critical questions or coverage — some even before he’s interacted with them. It also comes while Trump is making a concerted effort to discredit members of the media ranging from Stahl to Welker to Chris Wallace of Fox News. He thinks any reporter he interacts with should fawn over him the way Sean Hannity or Brian Kilmeade does.

Whether we’re talking about his interactions with Jonathan Swan of Axios, Savannah Guthrie of NBC, or Chris Wallace of Fox News, Trump’s recent interviews with real journalists have uniformly been disasters. He’s so immersed in the insular world of Fox News that he regards obvious truths (“why didn’t you develop a health plan?”) as attacks on him.

For whatever reason, the session with Stahl seems to have sent Trump into an unusually drastic tailspin. Some people will watch the footage he published and see a president who can’t deal with basic lines of questioning and is a world-historical whiner, but Trump apparently views it as evidence that he’s beleaguered on all sides by people with an agenda who are out to get him.