Why didn’t Cory Booker catch on? 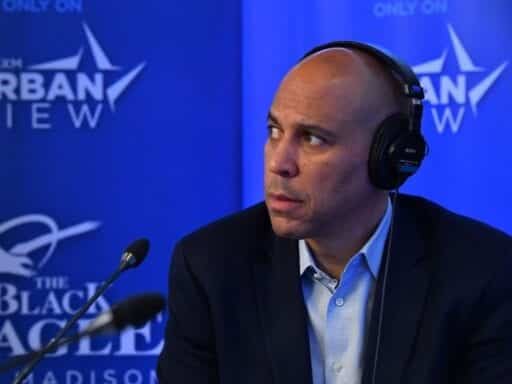 An “uncomfortable” conversation with Booker, recorded just before he dropped out.

On Friday, I sat down with Sen. Cory Booker for 90 minutes. It was, simultaneously, one of the most inspiring and maddening interviews I’ve done with a presidential candidate. Inspiring because there is a moral radicalism and spiritual generosity to Booker’s politics that set him apart from other politicians. Maddening because when Booker turns his politics outward, they lose clarity. He shies away from drawing bright lines, his answers double back to blur out potential offense. In showing his love, he muddles his message.

On Monday, Booker dropped out of the race after failing to qualify for the next Democratic debate. “I got in this race to win, and I’ve always said I wouldn’t continue if there was no longer a path to victory,” he said.

There is a moral radicalism to the way Cory Booker lives out his politics. He lived for years in a housing project. He leads hunger strikes. He challenges political machines. He’s a vegan. He has a more ambitious policy vision than is often discussed, but beneath that is a far more radical ethical vision than he gets credit for.

One exchange particularly stood out to me. I was pressing Booker on the way the current political moment rewards confrontation with attention and sharp line-drawing with support. Booker replied:

Barack Obama, God bless him, he played by the Queen’s rules, for lack of a better way of putting it. This president is breaking norms and traditions every day to demean, distract, divide, degrade. If I’m the president of the United States, I’m not playing by the Queen’s rules. I will do things from that office people do not expect.

Booker wouldn’t say. “I’m not going to do that because part of it is the element of surprise,” he replied. “But I think about this all the time.”

I believe Booker when he says he thinks about these questions all the time. But I think there’s a reason he had so much trouble being clear about what his political vision demanded from the rest of us.

Booker is trying to craft a politics of love and reconciliation in a time of conflict and confrontation. But how do you fight and heal simultaneously? If you need to create friction to get attention, how do you not feed the thing you think is ripping the country apart? In the answers Booker gave, that’s the problem I could hear him trying, and failing, to work out in real time.

The race will be poorer for Booker’s absence. There’s something he was trying to say that I think the country would benefit from hearing. I hope he figures out how to say it more clearly, and we get more opportunities to listen.

And I think we might. A Booker VP pick would not surprise me at all.

You can listen to the whole conversation with Booker — and others — by subscribing to The Ezra Klein Show on Apple Podcasts, Spotify, Stitcher, or wherever you get your podcasts.

Jeff Bezos says the National Enquirer’s owner threatened to release his “d*ck pick,” so he described...
Game of Thrones season 8: episode recaps and reviews, spoilers, news, and analysis
How the 5G coronavirus conspiracy theory went from fringe to mainstream
Ballot selfies, state by state
National Guard troops are deploying to help with coronavirus. Here’s what they’re doing.
“Each city is a ghost city”: Life in Italy under full coronavirus lockdown