Why disaster relief is so hard 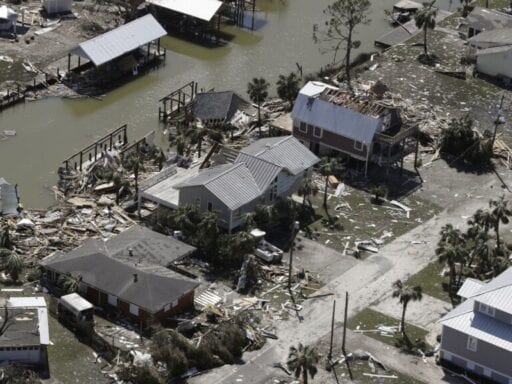 Disasters like Hurricane Michael can inspire the urge to give — but what’s the best way to help?

Hurricane Michael wreaked devastation in the southern US last week, leaving at least 18 people dead. It’s been estimated that damages will total up to $30 billion. That’s a devastating toll, but could easily have been much worse; Michael was a stronger storm than Katrina or Andrew, but hit a lightly populated area. Nonetheless, the devastation will take some time to recover from.

As is typical after a tragedy like this one, donations are already pouring in. Ordinary people are extraordinarily generous in response to tragedies like this one. Almost half of Americans reported donating to Hurricane Katrina relief, and nearly three-quarters gave to charity after 9/11. People also give generously after disasters overseas when they hear about them — though the media covers some tragedies much more extensively than others.

It’s surprisingly challenging to turn this generosity into results for the people affected by disasters. Individual donors can’t typically do much to speed search-and-rescue efforts. (And individuals trying to be rescuers themselves can just add to the number of people in danger.) Roads and airports are often flooded in a disaster situation, making it hard to get supplies to where they’re needed.

Another complication is that the generous response to disasters can bring in an extraordinary flood of money compared to the typical budget of most local charities. Most charities have a small budget and are accustomed to operating within it. They might be able to benefit from 20 percent more money, or even twice as much, but if deluged with several hundred times their typical operating budget, they often don’t know how to move it toward the people who need it most. Waste and corruption are serious concerns in disaster relief operations, spectacularly highlighted by the infamous fake 9/11 charities.

For all of those reasons, disaster relief, especially in the immediate aftermath of a disaster, can be difficult to do effectively. People who donate in those situations may be disappointed to learn that their donations haven’t been especially useful. And because of that track record, donors and charities concerned with most effectively helping people in need often don’t target disaster relief at all, instead opting for donations to areas where there’s no immediate catastrophe and less complexity and uncertainty. Doing so is almost always more cost-effective.

But these problems with disaster relief don’t have to lead to paralysis. For the potential donor, effective giving in response to disasters requires looking at potential charities with an eye for where your money matters.

Donors can’t much affect search-and-rescue. They can affect long-term recovery.

When thinking about disaster aid, we can think about a few separate aspects of disaster recovery, each with their own challenges. Relief work is the immediate disaster response — search and rescue, supply drops, emergency medicine. Relief work is typically hampered by logistical hurdles, not by a lack of funding. In a severe disaster, roads and airports are closed, and victims are often panicked and disorganized.

Two weeks ago, an earthquake and tsunami in Indonesia killed more than 1,000 people. The New York Times reported that a number of factors delayed aid: “the airport, hampered by a damaged control tower and cracked runway, was briefly closed,” and “thousands of desperate people stormed the Palu airport, many apparently trying to flee the stricken city. The rush on the runway was so frenzied that an Indonesian Air Force plane filled with relief supplies was unable to land.”

Figuring out how to solve these problems and deliver aid under conditions like these is very important. They aren’t problems caused by a shortage of money or supplies, though, and generosity by donors can’t solve them.

By the time a disaster has struck, it’s largely too late to improve search-and-rescue capabilities or immediate disaster response. Investments in improving those capabilities need to be made before a crisis — not while one is already happening.

Donors are more helpful with the second aspect of disaster response: recovery. Money and supplies are needed to clear rubble, provide medium-term shelter while homes are rebuilt, keep affected areas supplied until roads and rail systems are repaired, and provide medical care to displaced persons.

Charities have for years voiced concerns about people shipping physical supplies — shoes, clothes, and food — to areas affected by disasters, unaware that these supplies can displace more urgent and better-targeted aid shipments and often go to waste. They generally urge the public to donate cash, and let nonprofits buy the needed supplies.

But while it’s intuitive that charities might not always need your old shoes, it’s less intuitive that they might not need your money. Sometimes an organization has all the donations it knows what to do with, and the remaining barriers to effective relief are staff time, expertise, access to affected areas, or limited supplies. Experts call this “room for more funding.” A charity has room for more funding if giving them more money will let them do more of what they’re doing.

Charities will rarely turn donations down, but that doesn’t mean they’re always actively seeking donations. And if a charity is actively seeking donations despite not knowing what to do with them, that’s a bad sign. Charities with room for more funding are more likely to be specific about how the money will be spent — for example, saying “we’ll be building houses” or “we’ll be compensating victims” — and ideally will specify their fundraising targets for each of their programs.

Donations are needed when no one else is giving them

Disaster relief tends to happen in abrupt peaks. Donations happen almost immediately after a disaster occurs, and quickly die down as the news cycle moves on to other things. Eighty percent of donations occur within the first days of a disaster.

Ideally, charities would stockpile the donated money then and spend it as needed over the course of the next months and years as the area rebuilds and recovers. Unfortunately, that doesn’t always happen, and it’s not uncommon for there to be more need six months or a year after a disaster — when the rest of the world has moved on — than immediately after.

The fact that people make their donation decisions so quickly can have grave consequences. Often, it means major disasters get overlooked if the news doesn’t get out about them quickly enough. The 2010 earthquake in Haiti was genuinely one of the worst disasters in recent history, killing an estimated 160,000 people. $13 billion was raised in aid — much of it in the early days of the disaster.

But two years earlier, at least 138,000 people died in Bangladesh and Myanmar of Cyclone Nargis. Only about $300 million was raised, nearly all of it from governments. Thanks to initial reluctance by Myanmar’s authoritarian government to permit aid, as well as concerns that the government was using the money to cement its hold on power, this tragedy missed its first-week rush of donations. By the time the country reluctantly assented to some foreign assistance, the disaster had started to slip from the news. Many Americans didn’t and still don’t know it ever happened.

All this brings up an important concept that charitable donors should be more aware of: neglectedness. If a disaster happened during a busy news cycle, or in a country with few foreign journalists, or if it’s a type of disaster where the death toll will be slow and hard to measure instead of immediate and catastrophic, people may not be paying enough attention. Those are usually the places where money really is desperately needed.

One other thought: Giving money when disaster strikes is a good impulse. But one thing for a donor to consider is to set aside the money and then follow up with charities a few months later to ask what they’re doing on the ground and whether it needs more funding.

In a field without much clarity, charities have to be highly responsible

Disaster relief is a field where there’s a lot of uncertainty about what works. In an uncertain environment, it’s particularly important that charities be transparent about what they’re doing and open to the possibility they’re making mistakes.

A charity should be able to explain what programs they’re in a position to offer, how much money they need to wholly fund those programs, and what they will do with additional money received after they’ve fully funded their programs. Charity evaluators like GiveWell, which try to identify the most promising programs, have found it particularly hard to get the clarity they prize when it comes to disaster relief.

Often, the more urgent and complicated the situation, the less clear and transparent charities feel they are able to be. Unfortunately, that’s when transparency is needed most, so we can develop a better picture of what works for future disasters.

Even better would be a charity that’s aiming at effectiveness, collecting data on what they’re doing, and scaling (or canceling) their programs accordingly. This is challenging in disasters, as no two are the same and it’s hard to know if past successes really predict future ones.

Since we still don’t know all that much about the best ways to provide effective aid in the aftermath of a disaster, there’s a lot of room for experimentation. Here, too, it’s important for charities to do things right. Experiments should ideally be announced in advance, have a clear mission statement, and report how the trial went.

Two years ago, GiveDirectly, a charity that does cash transfers to the poorest people in the world, did a good job of venturing into disaster relief while staying focused on results. The organization was curious about whether cash transfers — literally giving people who just suffered through a disaster cash — worked well for disaster relief. There are some reasons to think it might — a cash-transfer program has extremely low overhead, can happen even if roads and airports are damaged or full of high-priority aid, and works remarkably well at improving outcomes for the world’s poorest.

But there are also some reasons for skepticism — maybe giving people money in disasters just results in bidding-up of scarce supplies. GiveDirectly handled this with a small-scale trial offering cash transfers to victims of Hurricane Harvey. It wanted to check whether its cash-transfer based approach worked everywhere, not just in the poor regions of Kenya where it traditionally operated, and that it was as viable for disaster relief as for aid efforts targeting poverty.

In an update, GiveDirectly reported that it could successfully get cash to about 90 percent of the target population who were mostly able to use it — which makes straightforward cash aid look like a promising intervention for disasters in rich countries, though a different host of problems would be expected in poor ones. (In particular, destroyed infrastructure both makes it hard to get cash to affected populations and makes it hard for them to use the money to buy any supplies they may need.)

We need more experiments like that. People are extraordinarily generous and willing to give hundreds of millions in aid to disasters when they can. Right now, there isn’t a clear picture of how to consistently turn that generosity into good results. But careful experimentation is a very valuable step on the road to figuring that out.