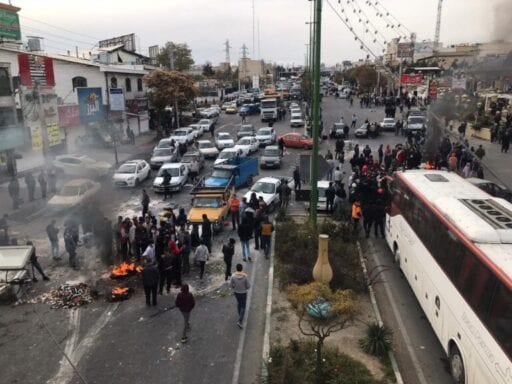 Share
Loading...
Protesters set fire as they block the roads during a protest against gasoline price hikes in Damavand, near Tehran, Iran, on November 16, 2019. | Stringer/Anadolu Agency via Getty Images

Hikes in gas prices resulted in an internet blackout, a hundred dead, and thousands arrested.

As the internet slowly flickers back on across Iran, videos of violent clashes between protesters and security forces are bursting into the public eye. In the days following a fuel price hike on November 15, thousands of Iranians took to the streets to demonstrate their dissatisfaction with the decision.

The 50 percent increase in fuel prices, which historically were highly subsidized, came without warning. Two days after Iranian President Hassan Rouhani announced that the country faced a deficit that amounted to nearly two-thirds of the yearly $45 billion budget, Iranian state television broadcast his decision to increase gas prices for nearly 60 million Iranians.

“It’s a little difficult to tell why [the Iranian regime] did what they did at this time with the subsidies,” Suzanne Maloney, an Iran expert at the Brookings Institution think tank in Washington, told me.

“There’s no excuse for undertaking that policy in this way,” Maloney continued. “This announcement was unusual as it was so abrupt; it came with no notice or planning to brace the public.”

The Iranian government is under increasing strain due in large part to the Trump administration’s “maximum pressure” policy of increased sanctions and support for the protesters.

Iran has become so unstable that the regime has shut down their entire Internet System so that the Great Iranian people cannot talk about the tremendous violence taking place within the country….

Iran dismisses Washington officials’ statements of support for the protesters as “hypocritical” due to the effect that the sanctions have had on the Iranian economy that led to this crisis.

Reza Khaasteh, a reporter and editor for the Iran Front Page news site based in Tehran, said that the economic situation the Iranian people are laboring under directs their anger both at home and abroad.

“Frustration is very widespread now,” Khaasteh told me. “The government needs to do much more to regain the trust [of the people]. But it’d be very, very difficult. … The decisions made by the government were wrong moves in the wrong time, as the people were already struggling under the US sanctions, and could not stand any more economic pressure.”

According to Tehran’s governor, around 70 percent of provinces experienced protests. Unlike the Green Movement protests of 2009 and unrest at the end of 2017 into 2018, these protests were met with unprecedented new levels of violent crackdown by the regime. Human Rights Watch reported more than 100 protesters were killed and around 1,000 arrested in clashes with regime forces on November 19. Subsequent reporting indicating the number of dead was a conservative estimate and placed the death toll around 180 confirmed with hundreds more possible.

But one of the most unsettling differences from past demonstrations for Iranians and their relatives living around the world was the blanket of silence that fell over the country with the internet shutdown. Sina Toossi, a senior research analyst for the National Iranian American Council, described the sudden silence from his friends and family inside Iran with apprehension.

“It’s been very scary, the quiet,” said Toossi. “We’re all pretty active on WhatsApp groups and … chats, sending a message or photo to friends or family. It’s been very unnerving for everyone to just fall silent.”

While Toossi and others like him are now able to contact some of their loved ones inside Iran, not everyone is back online. According to the internet freedom-mapping group NetBlocks, around 85 percent of internet in Iran is restored as of Sunday, with cellular connectivity hovering around 25 percent.

Internet blackouts are not unheard of as governments attempt to control their populations, but the scale of this most recent shutdown in Iran was unusual. With their own intranet, Iran was able to keep vital infrastructures running like hospitals and banks, while completely denying access to the only two global internet portals in Iran because both of the gateways are owned by the government.

The decision to shut off citizens’ access to the internet also raised questions about the effects of information deprivation on the Iranian population suffering from economic hardship and looking for a source of blame. Vox’s Delia Paunescu writes:

[An] alarming fact is that Iran might further isolate its citizens from the rest of the world through its own intranet, which the government has been developing in order to give the regime more control over what content and services people can access in the country.

The internet blackout was both an attempt to keep protesters from organizing online and a way to contain, is only temporarily, video of the protests from reaching international audiences.

Maloney, Khaasteh, and Toossi all made it clear that while the numbers in street were substantial, this was not the kind of mass mobilization that shook the shah from his throne in 1979. Khaasteh said that reports of the “thugs” and “vandals” torching buildings and inciting violence kept many Iranians who were able to find out about the protests, despite a lack of internet, at home. Toossi characterized the expressions of dissatisfaction from the lower-income population as signs that they were fed up with their ruling class, but not enough to risk everything.

“The technocratic government represents a consensus among the people about order, but it’s barely stable,” Toossi said. “In Iran, I’d say the majority of people have deep grievances. Yet, with these scenes of violence, a lot of people are really scared, they don’t want to lose their relative stability.”

Maloney described the scenes of protest coming out of Iran since the internet revival as “unlike anything I could imagine.” In its current leaderless state, she doesn’t see the eruption of the current protests turning into a full-blown revolution — yet.

“I’m not sure where [leadership] will come from,” Maloney said. “But, we will see continuing episodes like this because the Iranian government has some tough decisions to make going forward, decisions that aren’t politically popular in this period of high pressure against them.”

These cities are vying to host the 2020 Democratic National Convention
Is it ethical to hire babysitters, delivery services, and cleaners right now?
Vox Sentences: There’s no planet B
Congress’s failure to pass stimulus has had a devastating — and predictable — effect on minority gro...
A Republican lawsuit could force Wisconsin to reopen immediately
Brexit is finally happening. On January 31. For real this time.