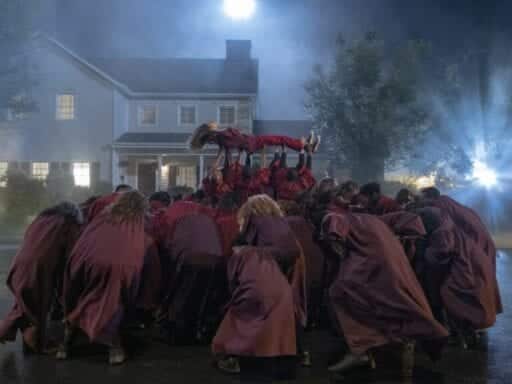 The ending of this season finale. What is happening here! | Eddy Chen/HBO

Being a teenager is a traumatic experience. You’re spending most of your waking hours in high school, a truly, truly terrible place to live. That’s why teen TV shows can be so cathartic.

A good teen show reenacts the worst parts of our lives, only it fills it with beautiful people and clever quips, and it takes all of the petty nonsense of high school as seriously as it felt at the time. When that really works, it can feel like a therapeutic release to watch a great teen show. And to do that work, teen shows tend to follow one of four basic templates.

There’s the My So-Called Life and the Freaks and Geeks route, which is all about recognizing how low-stakes and silly most high school drama is and treating it with empathy and gentleness regardless. When sophomore Angela Chase tells us in the pilot of My So-Called Life that she feels like she’ll die if she doesn’t start to hang out with the wild Rayanne Graff, it sounds absurd — but you also know exactly how she feels.

The Buffy the Vampire Slayer template involves a layer of metaphor that turns the stakes of high school drama apocalyptic. The girl who everyone ignores turns invisible; the girl whose mother wants to relive her high school glory days through her steals her body; and when Buffy sleeps with her boyfriend, he does something worse than just disrespecting her the next morning: He turns evil and goes on a killing spree.

In a didactic, issues-driven show, like The Fosters or Degrassi, every episode makes an attempt to think through some new social problem that teens are facing. The Fosters has a school shooting episode and a trans rights arc and an abusive boyfriend arc and a bipolar arc, and it treats every last one of them with complete earnestness and a sincere desire to teach its teen viewers the correct way of responding to such issues.

And there’s the paradigm used by shows like 90210, The O.C., and Riverdale, where the volume on everything is just turned up to eleven. There’s murders and love triangles and teenagers who constantly talk like world-weary 40-year-olds, and absolutely none of it is supposed to feel emotionally realistic or like a teaching moment. Everything is just supposed to be sudsy and fun.

But over the course of its eight-episode first season, Euphoria found its more thoughtful, honest heart. It’s gotten less shocking and much more sincere, less issues-driven and more character-focused. In the season finale, “And Salt the Earth Behind You,” which aired August 4 on HBO, Euphoria finally revealed its true self.

When Euphoria is soapy and salacious, it is the worst version of itself. But when it’s at its best, it’s an earnest and intimate teen drama that uses its sophisticated visual vocabulary to evoke the way adolescence feels, even if the lighting is never quite so good in real life. In other words, when Euphoria is really good, it’s a nouveau My-So Called Life with the potential to develop into a Buffy.

Euphoria has a tendency to get a little bit Hot Topic. But it’s learned to veer away from those problems over time.

The premise of Euphoria is as follows: 16-year-old Rue (Zendaya) has just come home from rehab to attend her junior year of high school. Rue didn’t plan to stay sober, but once she strikes up a friendship — and then romance — with new girl Jules (Hunter Schafer), she gets clean again. She decides that she doesn’t need to have drugs when she has Jules.

All of these big, self-consciously scandalous plotlines have the potential to come off as though they’re trying too hard — a little bit like a 16-year-old in a Hot Topic shirt and abundant eyeliner smoking a clove cigarette expectantly in front of you, just waiting for you to be shocked. And in Euphoria’s earliest, clumsiest episodes, its inner Hot Topic teen is out in full force. The pilot opens with a shot of Rue as a fetus in-utero while Zendaya intones her most world-weary voiceover, “I once was happy,” before the camera zooms out of Rue’s mother’s vagina to symbolize the wrenching pain of birth and the eternal end of happiness. Absolutely no one could blame you if you decided to switch the damn insufferable thing off forever there and then.

But those early episodes also contain moments of disarming emotional sincerity, like Jules and Rue curling up in bed together on the first night they meet and getting caught up in an intimacy so electric, the air around them seems to glow. The world goes color-saturated and rich, and it’s a pitch-perfect evocation of how it feels to be 16 and finding another person who makes everyone else in the world cease to exist — as though, as My-So Called Life put it, “everybody else was in black and white and that person was in color.”

As the season goes on, Euphoria begins to lean into moments like these in other plotlines too. It continues to play with scandalous ideas, but over time, it starts to feel less like it’s saying, “Hey grownups, are you SHOCKED yet?” and more like it’s considering about how profoundly shitty it is, and always has been, to be a teenager, and how that shittiness has grown in magnitude as the internet continues to devour everything on- and offline.

And at its best, Euphoria leavens its earnestness with twisted flights of surreality. Rue explains how to judge a dick pic in a parody of an old-school slideshow presentation; when she’s on a manic episode, she turns into Morgan Freeman in a ’90s law thriller, hot on the case of what’s going on with Jules and her catfisher. These moments are character-driven, but they’re also whimsical and funny enough to puncture the show’s tendency toward pretension.

There are some storylines on Euphoria that never quite outgrow their Hot Topic roots, however. Nate, the popular high schooler who catfishes Jules, has embarked on a spree of sadistic crimes that he covers up with blackmail, and it’s never quite as dark or as interesting as the show wants it to be. (Why don’t some of the grown adults he’s blackmailing call his bluff? He is 16!) And Rue gets entangled with a local drug lord in a subplot that feels fully ported over from some other, much more boring TV drama.

In the season finale, “And Salt the Earth Behind You,” both storylines come to an incoherent climax, with the drug lord menacing Rue’s hapless drug dealer friend and Nate breaking down, battering his head against the floor during an argument with his controlling father. But in its final moments, “And Salt the Earth Behind You” leaps into a new method of storytelling for the show, one that marries its sincerity with its surreal visual vocabulary to enter into a new emotional mode.

I’m not sure it totally works. But it’s so weird and interesting that I’m delighted the show goes there anyway.

In an effort to win Jules back, Rue suggests that they both run away to the city together — but at the last moment, Rue backs out of the plan. She doesn’t want to leave her mother and sister behind, especially not after all that she put them through when she overdosed before the series began. So Jules goes off to the city without Rue, and Rue walks back home in tears, and then relapses upon her arrival.

We see Rue do a line of coke and collapse onto her bed. And then after a moment, she arches up, is apparently pulled out of bed by an unseen force, and begins stumbling through a … metaphorical music video?

If you can, I’d recommend just watching the video, because what happens next is difficult to describe. But here’s more or less how it goes: Walking jerkily, Rue lurches her way out of her bedroom and into her living room, where she embraces her unmoving and unaware family. Rue’s actress Zendaya is singing an original song in voiceover (Zendaya, who came up on the Disney Channel, had a music career in addition to her acting career for awhile), and onscreen, Rue is mouthing along to the words, but slightly off-beat. Her dead father appears and twirls her around.

Then Rue finds herself in the street, surrounded by masses of dancing people wearing robes the exact color of the hoodie Rue took from her dad’s room after he died. The people form a pyramid, and Rue climbs to the top and then dives into the center of the pyramid, disappearing from the camera’s gaze.

It’s a weird three minutes of television. It’s super weird! Watching it, I’m not at all sure I even like the scene. But I do think the scene marks an exciting turn for Euphoria. If the show can figure itself out from here, this might be remembered as the moment where it found its inner Buffy.

Heightened fantasy sequences have been part of Euphoria’s vocabulary since Day 1. But generally, it saves them for moments of levity. It doesn’t use them to amplify its sincerity.

In this final sequence, Euphoria finally peels away all its layers of smug, prepare-to-be-shocked pretension and exposes its deeply sincere, teenaged heart. This is Rue, who just sacrificed the person she fully believes to be the love of her life for her family’s sake, betraying her family in an act of self-destruction. And then — because Euphoria wants us to feel everything just so deeply, the way you do when you’re a teenager — the show discovers that literal storytelling won’t capture the emotional truth of the moment. It has to layer a metaphor on top instead. We have to see Rue get pulled away from her family and let her addiction swallow her up whole.

A teen show that can tap into that kind of storytelling again and again, that can capture exactly how it feels to be 16, experiencing everything with operatic intensity, has a shot at being a really great show. It’s exciting to think that, in its second season, Euphoria might get there.