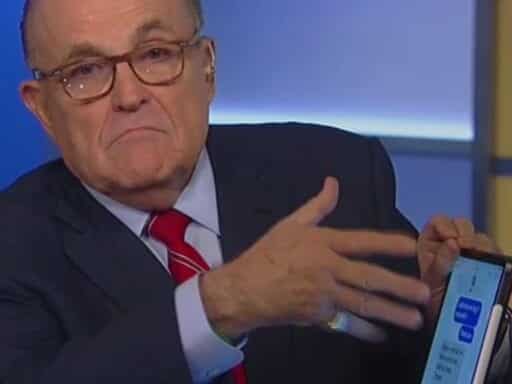 Giuliani’s “giant iPad texts” were undeniably amusing — but they’re a serious problem for the State Department.

Casual viewers of Fox News’s The Ingraham Angle may have been confused by Rudy Giuliani’s behavior during his Thursday night appearance on the show — in particular, his decision to read personal text messages from a giant iPad live on the air.

But there’s some method behind his madness.

Giuliani — who had posted screencaps of the text messages on Twitter a few hours earlier — seemed to be trying to implicate the State Department in the rapidly widening Ukraine scandal (in which he’s a central player), perhaps in hopes of covering his own behind.

Here’s Rudy Giuliani reading personal text messages live on air in an effort to prove just how deeply involved in this Ukraine mess the State Department is pic.twitter.com/4uUWiE5mjA

Giuliani’s latest Fox News appearance came on the same day as the release of an intelligence community whistleblower complaint that describes how the president’s personal lawyer played “a key role” in efforts to strongarm the Ukrainian government into investigating President Donald Trump’s 2020 political rival, Joe Biden.

Giuliani’s actions, according to the whistleblower, left State Department officials “deeply concerned” about his “circumvention of national security decision-making.”

The complaint is corroborated by a White House memo released Wednesday that describes a call between Trump and Ukrainian President Volodymyr Zelensky in which Trump asks Zelensky to work with Giuliani and Attorney General William Barr to investigate Biden.

The complaint portrays Giuliani acting as a sort of unofficial US envoy to Ukraine and using his connections to try and get the Ukrainian government to do Trump’s bidding — a portrayal backed up by news reports and Giuliani’s own public statements.

But as the scandal has intensified, Giuliani has repeatedly gone on Fox News to push back on the notion he went rogue, claiming his outreach and trips to meet with Ukrainian officials were undertaken at the behest of officials at the State Department, including Kurt Volker, the US special representative for Ukraine negotiations.

And on Thursday night he decided to read his text messages on live television to try to prove it.

“Here’s Kurt saying, ‘Great, I will tell Yermak and he’ll visit you there, thanks,’ [and] ‘Mr. Mayor, how was your meeting with Andriy? Do you have time for a call? Best, Kurt,’” Giuliani read, referring to Andriy Yermak, a top aide to Zelensky. “They’re all over me, asking me to do it. I was happy to do it. I helped my country get this relationship in good shape.”

While the full context of Giuliani’s text exchanges with Volker is unclear (it also isn’t completely unthinkable that Giuliani is just making stuff up), his implication is that the State Department endorsed his shady Ukrainian diplomacy.

Rudy might think he’s helping himself, but he’s making things worse for the Trump administration

Giuliani is seemingly trying to protect himself from suspicions he may have solicited a foreign campaign contribution or run afoul of the law in some other way, but in the process he’s creating big problems for the State Department.

We know @RudyGiuliani is not quite on the level, but if these giant iPad texts are real, then it’s further evidence we need to investigate the State Department’s role in this mess.

We have to get to the bottom of this corruption. Who all is helping Trump abuse his power? pic.twitter.com/g4bScGPwul

Harris posted a follow-up tweet asking Secretary of State Mike Pompeo to “preserve any communications” involving Giuliani. “No more cover-ups. Do not destroy any evidence. Be patriots,” she wrote.

Giuliani has a long history of going on TV to get ahead of damaging revelations related to Trump — during the days of Robert Mueller’s Russia investigation, he was one of the first prominent figures to push the “collusion isn’t a crime” talking point, for instance — so his claims about State Department involvement in the Ukraine scandal may hint at more revelations to come.

Just last week, I wrote about a meltdown Giuliani had on Chris Cuomo’s CNN show in which he confirmed reports that at that time were still vaguely sourced about the Trump administration putting pressure on Ukraine to investigate the Bidens. While it was unclear why Giuliani was volunteering such damaging information, in hindsight it appears he was just trying to get ahead of the story.

While there may be some strategy behind Giuliani’s latest media tour, it’s also undeniable that he’s been acting increasingly erratically. His latest appearance on Ingraham came hours after the Atlantic published an interview with Giuliani in which he’s described as ranting about the “deep state” and saying things like, “It is impossible that the whistleblower is a hero and I’m not. And I will be the hero! These morons — when this is over, I will be the hero.”

Indeed, Giuliani’s TV appearances have become increasingly conspiratorial — of late he’s been making dark insinuations about George Soros in every one of them — and at times he’s gotten angry, such as when he started yelling at a co-panelist during his Tuesday appearance on Ingraham’s show, calling him “an idiot” and telling him to “shut up.”

LOL! Rudy Giuliani made a guest appearance later during Ingraham’s show and immediately started calling a co-panelist “an idiot” and yelling at him to “shut up.” pic.twitter.com/Mh2LbJXuaT

It’s easy to laugh at Rudy’s antics. But the Ukraine scandal has Democrats quickly moving toward impeaching Trump, and has implicated government officials ranging from the attorney general to the vice president. But instead of doing what lawyers usually do and working to solve his client’s problems, Giuliani seems to be taking pleasure in making things worse.

One Night in Miami is a thoughtful study of Black celebrity, power, and justice
One Good Thing: No TV show understands the horror of middle school better than PEN15
How we know ending social distancing will lead to more deaths, in one chart
The best 70€ I ever spent: An old German sideboard
The difference between Nixon and Trump is Fox News
As immigrant children go without soap and toothbrushes, Trump and Pence say Congress is to blame