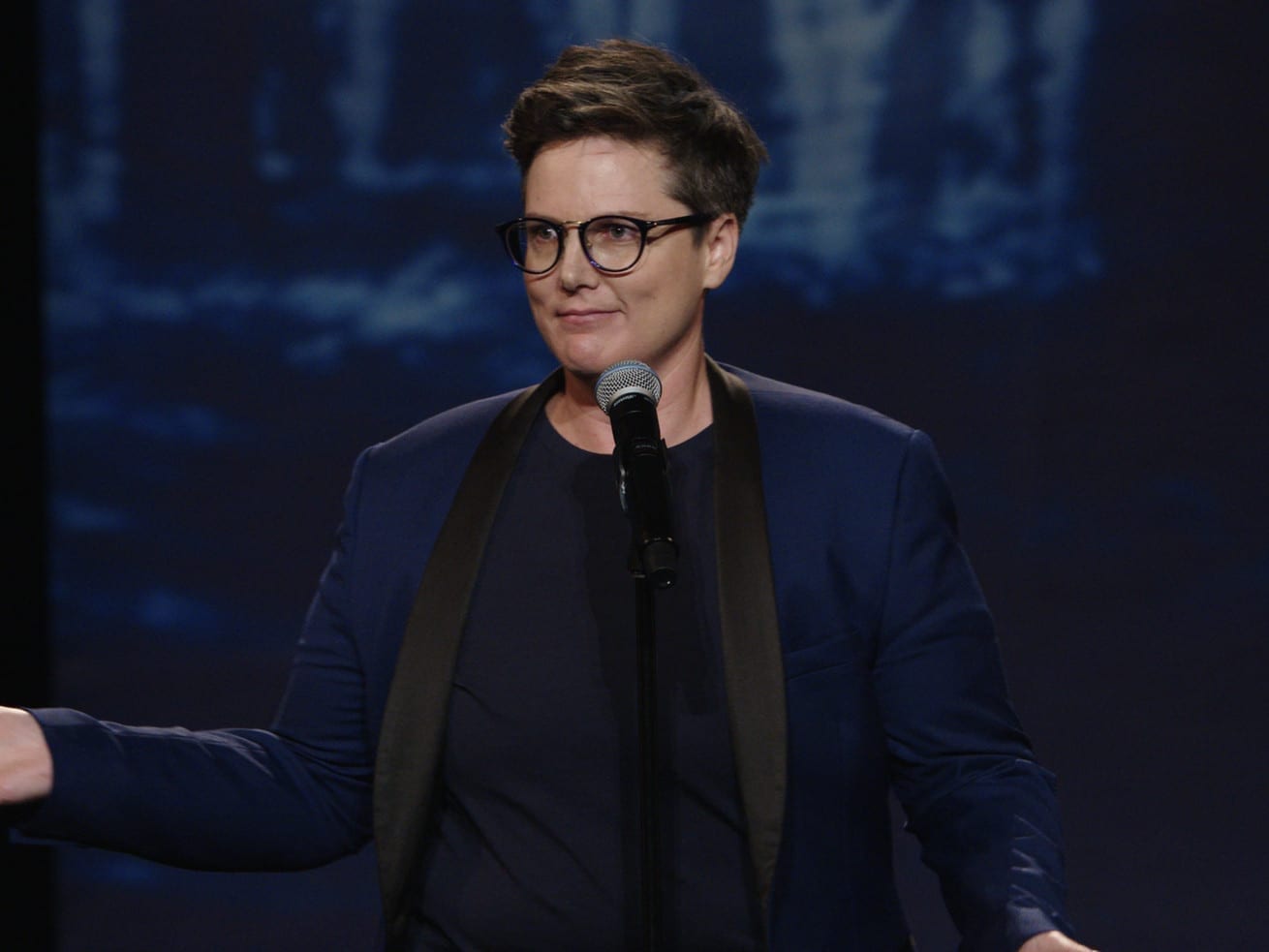 In Nanette, Hannah Gadsby turns her body into the survivor of a joke — not the brunt of it.

In an interview discussing her new special, Rape Jokes, queer standup comedian Cameron Esposito offers this crucial tip for understanding the state of comedy in 2018: “The way to deal with taboo subjects … is to lead with personal experience.”

Hannah Gadsby makes this instruction the foundation of her new, fire-starting Netflix comedy special Nanette. But Gadsby doesn’t just follow the example of many comedians before her by drawing on her life experience. She draws on her very identity to indict comedy itself for its failure to do more to sustain the marginalized voices at its edges.

Nanette has been making headlines for being difficult to watch, for making audiences uncomfortable. But what makes Nanette difficult to watch is what makes it hugely significant: Gadsby uses her identity — the reality of her physical presence, and the literal wear and tear of discrimination on her body — to deconstruct what it means to be a comedian who has been failed by comedy. Nanette’s uneasy relationship to comedy is a reflection of what it means to exist as a queer, butch, nonbinary woman in a social system that has always made you the punchline to the joke.

And even more, it’s a powerful rejection of comedy itself.

Gadsby’s performance is a tour de force in confrontation

Gadsby spends the first 17 minutes of Nanette acquainting her audience with her identity. First, she describes how she grew up as a lesbian in conservative Tasmania, where homosexuality was illegal until 1997. Then, with a reference to an audience member who didn’t think she had enough “lesbian content” in her last show, she upfronts the impossibility of extricating herself from her comedy by responding, “I was onstage the whole time.”

With this joke, Gadsby seamlessly juxtaposes two paradoxical but interrelated ideas: the centrality of her identity to her comedy, and the inability of comedy to ever fully address the complexity of that identity. Gadsby sets up a self-aware recognition of this failure in a few ways. For instance, she jokes that in her first comedy show more than a decade ago, as a “new gay comic,” she “told lots of jokes about homophobia.” Then she adds wryly, “really solved that problem.”

But it’s not until she abruptly announces, 17 minutes in, that she’s decided to quit being a comedian altogether that the audience starts to understand that this deconstruction of comedy isn’t just part of the game of comedy itself — not anymore, at least not for Gadsby.

“I identify as tired,” Gadsby says. And then she proceeds to lampshade a litany of discomfort. “Just jokes,” she says repeatedly, to make the point that jokes about identity are never just jokes. “Just locker room talk,” she says at one point, to really drive it home.

And when we rely on jokes for our perception of identity — as comedy requires us to do — we marginalize ourselves. When talking about her old coming-out routine, Gadsby speaks of freezing her experience at a “trauma point” in order to mine it for comedy, and notes that the “joke version” of her experience “was not nearly sophisticated enough to help me undo the damage done to me in reality.”

“When I came out of the closet, the only thing I was allowed to do was to be invisible and hate myself,” she says. At a couple of points during her increasingly raw performance, the audience appears to be seeking entry points into laughter even though the jokes are no longer forthcoming. But there aren’t any — and that’s the point of Gadsby’s performance. She’s not helping them deal with the release of their tension and discomfort through laughter anymore, because that tension is something those of us who are socially marginalized for our differences carry around with us every day.

In order to experience the full power of Nanette’s last act, in which Gadsby deliberately stops being funny, we need to experience the context of her first act, complete with acknowledging her non-normative physical appearance, which gradually becomes a major subject. Gadsby’s performance in Nanette is basically a three-part act of radical speech built around her physical presence: She confronts us with the reality of her physical identity; she asserts her own humanity; and she challenges the audience to interrogate its discomfort with that assertion.

Over the past decade, the comedy community has undergone a series of reckonings, from excising the rhetoric that women aren’t funny, to grappling with sexual assault allegations against Louis C.K., to the culture-wide reassessment of the women who had accused Bill Cosby of assault — which stemmed from a single comedy routine by Hannibal Buress.

The moment that arguably kicked off this entire era of comedy came in 2012, when comedian Daniel Tosh, known for his commitment to rape jokes when doing standup, apparently took things too far by telling an audience member during a set that she should be gang-raped.

This moment sparked ongoing controversy and backlash within the world of comics that, as evidenced by Esposito’s new special, is still ongoing; but it’s important to note that Tosh had built his career on similar jokes, delivered in the abstract, over the years. It wasn’t until he took that comedy and applied it to a real woman in the room that suddenly it was a joke too far.

Gadsby understands all too well that the point at which comedy breaks down is the point at which its abstract ideas have to contend with physical reality — with the identities and lived experiences of real people. Comedy is well-known for trading in autobiography, for mining personal experience for harsh truths. But when marginalized comedians take the stage, far too often, their vehicle for being heard runs on self-deprecating humor.

In a 1997 essay on the self-deprecating humor of female comedians like Phyllis Diller and Roseanne Barr, Joanne Gilbert writes, “female comics rhetorically construct and perform their marginality onstage.” That basic approach to marginalized identity has remained more or less constant in the decades since.

For instance, transgender comedian Robin Tran positions herself as wryly self-aware about her own internalized misogyny, joking that she might be setting the women’s movement back 50 years by transitioning into a stereotype; comedian Sonia Trevino opens her routine by turning her own fatness into a repeated punchline. Sonia Denis, whose standup is often described as “confessional,” follows up a joke about visiting a therapist because she’s been having suicidal thoughts with a joke about wanting to disappear into a world inhabited only by straight white male comedians. “I don’t want to be woke anymore,” she says. “It’s the worst!”

Each of these approaches to identity spotlights an uncomfortable aspect of difference by localizing it, centering it on the lived experience of the performer — and then more or less dismissing it, either by giving the audience permission to laugh at it or by minimizing the anxiety surrounding it. It’s an abstraction of identity Gadsby calls attention to repeatedly in her standup, noting that the structure of a joke only allows for a set-up and a punchline with no further exploration of the reality behind that idea.

It’s this abstraction that gives comedy much of its power to draw attention to harsh truths through satirization and exaggeration. And, crucially, it’s this abstraction that has allowed women and minorities onstage to begin with. As long as the person telling the jokes doesn’t get too real, they can aim straight for the jugular. It’s a paradoxical line that comedy has walked for generations — but it also cossets the audience.

Gadsby overtly rejects self-deprecating humor from the outset of her show, seeking a more empowering way to talk about her identity. The rest of the set, then, is her outlining the process of her discovery that it may be impossible to truly talk about non-normative experiences in comedy. Gilbert addresses this obliquely in her essay, noting that because the performance of marginalized identity is offered in a comedic context, it’s “safe from retribution.”

But Gadsby isn’t interested in being safe; the whole point for her is that she never has been safe. Her comedy couldn’t protect her from being the object of hate crimes, or sexual assault, or from growing up with a permanently instilled sense of self-hatred. Once comedy is forced to contend with the reality of living as a marginalized human being, it utterly fails.

No one seems to have understood this better than Mel Brooks, the king of post-war comedy. In a 2006 interview with the German magazine Spiegel, he stated that humor is the way to rob fascism of its power — while simultaneously insisting that the film Life is Beautiful had gone too far in searching for comedy amid concentration camps.

“The philosophy of the film is: people can get over anything,” he argued. “No, they can’’t. They can’’t get over a concentration camp.” By the same token, his recent lament that “politically correct” culture is killing comedy is a frustration born of this idea — that the more aware we become of the pain suffered by marginalized groups, the harder it is to tackle those subjects using traditional kinds of comedy.

What Brooks is suggesting here is that the reality of marginalization is properly in the vein of horror, not comedy — and that good comedy should never lose sight of that. Gadsby’s story ultimately reveals that her experience of living as a queer, genderqueer comedian has been a nightmare rather than a laugh.

In telling it, she’s made it impossible for comedians who come after her, and their audiences, to forget the horror that dwells on the other side of every joke.

The 24 best TV shows of 2018 so far
Obama’s HBCU commencement speech doubles as an indictment of the Trump era
“I couldn’t imagine all of the things that have happened”: What Marie Yovanovitch told impeachment i...
The billionaire house hostage saga of Azealia Banks, Elon Musk, and Grimes, explained
The techlash isn’t big enough to stop Facebook from selling video chat devices for your living room
Progressives, in a push to sway Biden, send list with 100 potential foreign policy hires