Why haven’t we found aliens yet? 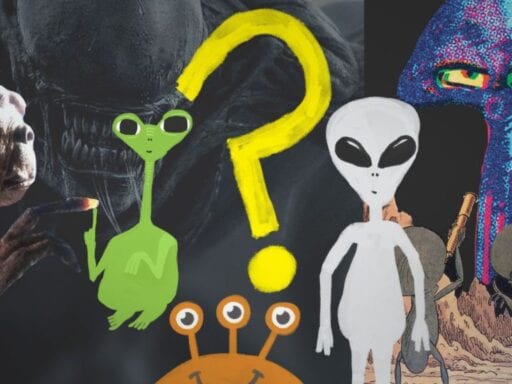 A new paper on the Fermi paradox convincingly shows why we will probably never find aliens.

Once, when I was 9, my mother and I were scouring the summer night sky for stars, meteors, and planets.

Suddenly, an object with a light that pulsed steadily from bright to dim caught my eye. It didn’t have the usual red blinkers of an aircraft and was going far too slowly to be a shooting star.

Obviously, it was aliens.

My excitement was short-lived as my mother explained it was a satellite catching the sun as it tumbled along its orbit. I went to bed disappointed: The X-files was on TV twice a week back then, and I very much wanted to believe.

Today that hope is still alive and well, in Hollywood films, the public imagination, and even among scientists. Scientists first began searching for alien signals shortly after the advent of radio technology around the turn of the 20th century, and teams of astronomers across the globe have been taking part in the formal Search for Extraterrestrial Intelligence (SETI) since the 1980s.

Yet the universe continues to appear devoid of life.

Now, a team of researchers at the University of Oxford brings a new perspective to this conundrum. In early June, Anders Sandberg, Eric Drexler, and Toby Ord of the Future of Humanity Institute (FHI) released a paper that may solve the Fermi paradox — the discrepancy between our expected existence of alien signals and the universe’s apparent lack of them — once and for all.

Using fresh statistical methods, the paper re-asks the question “Are we alone?” and draws some groundbreaking conclusions: We Earthlings are not only likely to be the sole intelligence in the Milky Way, but there is about a 50 percent chance we are alone in the entire observable universe.

While the findings are helpful for thinking about the likelihood of aliens, they may be even more important for reframing our approach to the risk of extinction that life on Earth may face in the near future.

In 1950, while working at Los Alamos National Laboratory, physicist Enrico Fermi famously exclaimed to his colleagues over lunch: “Where is everybody?”

He had been pondering the surprising lack of evidence of other life outside of our planet. In a universe that had been around for some 14 billion years, and in that time developed more than a billion trillion stars, Fermi reasoned there simply must be other intelligent civilizations out there. So where are they?

We still don’t know, and the Fermi paradox has only strengthened with time. Since the 1950s, humans have walked on the moon, sent a probe beyond our solar system, and even sent an electric sports car into orbit around the sun for fun. If we can go from rudimentary wooden tools to these feats of engineering in under a million years, surely there would have been ample opportunity in our 13.8 billion-year-old universe for other civilizations to have progressed to a similar level — and far beyond — already?

And then, surely there would be some lingering radio signals or visual clues of their expansion reaching our telescopes.

How scientists try to tackle the Fermi paradox, and why this paper is different

Space is a large place, and the task of accurately estimating the likelihood of little green men isn’t exactly easy.

In 1961, astronomer Frank Drake proposed a formula that multiplied seven “parameters” together to estimate N, the number of detectable civilizations we should expect within our galaxy at a given moment in time:

The Drake equation was only intended as a rough tool to stimulate scientific discussion around the probability of extraterrestrial life. However, in the absence of any reasonable alternatives, it has remained astronomers’ only method of calculating the probability of extraterrestrial intelligence. This is problematic because while some parameters, such as R* — the rate of new star formation per year — are relatively well-known, others remain hugely uncertain.

Take L, the average lifespan of a detectable civilization. If we look at the average length of the past civilizations here on Earth, it wouldn’t be unreasonable to assume a low value. If the Romans, Incas, or Egyptians are anything to go by, it seems hard to make it past a few hundred years. On the flip-side, you could argue that once a civilization becomes technologically advanced enough to achieve interstellar travel, it could conceivably last many billions of years.

This enormous uncertainty leaves the Drake equation ultimately vulnerable to the optimism or pessimism of whoever wields it. And this is reflected in previous scientific papers whose results give values of N ranging anywhere from 10 to many billions.

As astronomer and SETI co-founder Jill Tarter eloquently put it in an interview with National Geographic in 2000: “The Drake Equation is a wonderful way to organize our ignorance.”

Sincere attempts to overcome this vulnerability have previously been made via selecting a handful of conservative, medium, and bullish best estimates for each parameter value and then taking an average across them.

In their new paper, titled “Dissolving the Fermi Paradox,” the FHI researchers dispute this method by demonstrating how this technique typically produces a value of N far higher than it should, creating the illusion of a paradox.

This is because simply selecting a few point estimates and plugging them into the Drake Equation misrepresents the state of our knowledge. As an example, imagine three scientists who have differing opinions on the value of L:

If you take a normal, linear average of all the possible integer values from one to 1000, you would implicitly factor scientist C’s opinion 90 times more than scientist A’s because their range of belief is 90 times larger. If you use a logarithmic scale to represent the above so that each scientist’s range corresponds to one order of magnitude, all three opinions will be represented more equally.

Therefore, the researchers represented the full range of possible values on a logarithmic scale and ran millions of simulations to obtain more statistically reliable estimates for N. They then applied a technique known as a Bayesian update to those results. That means mathematically incorporating the information that we have not discovered extraterrestrial intelligence yet (because the absence of evidence of aliens is evidence itself!).

This implies that life as we know it is incomprehensibly rare, and if other intelligences exist, they are probably far beyond the cosmological horizon and therefore forever invisible to us.

But life can’t be that rare, can it?

To be clear, the paper’s authors do not appear to be making any definitive claim about whether or not aliens exist; simply, our current knowledge across the seven parameters suggests a high likelihood of us being alone. As new information becomes available, they would update that likelihood accordingly. For example, if we discover a second instance of abiogenesis — the process of rudimentary life emerging from non-living matter — on a comet or another planet, then this would narrow the uncertainty on the fl parameter significantly.

Nonetheless, their results have certainly caused a stir, especially after SpaceX CEO Elon Musk tweeted them:

This is why we must preserve the light of consciousness by becoming a spacefaring civilization & extending life to other planets https://t.co/UDDP8I1zsS

Many reacted to the paper’s findings by calling it anthropocentric and narrow-minded, arguing that any conclusion suggesting we Earthlings are somehow special is simply human arrogance.

This is somewhat understandable because the idea that intelligent life is extremely rare in the universe feels completely counterintuitive. We exist, along with other intelligent life like dolphins and octopi, so we assume what we see must be extrapolatable beyond Earth.

But this alone is not proof that intelligent civilizations are therefore ubiquitous. Whether the true likelihood is as high as one in two, or as inconceivable as one in a trillion trillion trillion, the mere ability to consciously ask ourselves that question depends on the fact that life has already successfully originated.

This phenomenon is known as an observer selection effect — a bias that can occur when thinking about the likelihood of an event because an observer has to be there to observe the event in the first place. As we only have one data point (us), we have no reliable way to predict the true likelihood of intelligent life. The only conclusion we can confidently draw is that it can exist.

So if we are alone, is this good or bad news?

Regardless of which side you take, the idea that we might be alone in the universe raises serious scientific and philosophical questions. Is our rareness something to celebrate or be disappointed by? What would it mean for humans to be the only conscious entities in the universe?

This last question matters hugely. Not only are we depleting our environmental resources at an unsustainable pace, but for the first time in the history of mankind, we’ve reached the technological stage where we hold the entire future of our species in our own hands. Within a few years we built enough nuclear weapons to exterminate every human on earth many times over and made these weapons available to our leaders on a hair-trigger. Each decade has brought us novel technologies with ever-increasing potential for both immense good and immense destruction.

As we rang in the new year, the Bulletin of Atomic Scientists moved the Doomsday Clock to the closest it has ever been to midnight. Meanwhile, estimates from various specialists in existential risk suggest somewhere between a 5 to 19 percent chance of complete human extinction by the end of this century — an unacceptably large probability considering the stakes.

Not only does this dark gamble affect the 7 billion of us alive today; if you factor in the moral weight of the billion billions of future people who would also never get to live out their existences, it becomes clear that we urgently need to get our collective act together.

As Carl Sagan famously said in his 1990 Pale Blue Dot speech: “In all this vastness, there is no hint that help will come from elsewhere to save us from ourselves. The Earth is the only world known so far to harbor life. … the Earth is where we make our stand.”

He’s not wrong, especially in light of this paper’s findings. If humanity really is the only civilization that may ever exist in this universe, then we shoulder a responsibility on a truly astronomical scale.

Liv Boeree is a science communicator and TV host specializing in astrophysics, rationality, and poker.

Megyn Kelly wanted to be the next Oprah. Her split with NBC shows why that may never happen.
Does increasing the tipped minimum wage actually help workers? 7 experts weigh in.
Trump accuses Harley-Davidson of being 'first to wave the white flag' on trade
It’s not just Twitch: The military has a history of using video games to reach young people
Congress is close to a deal on a roughly $450 billion small-business funding bill
The Supreme Court term starts Monday — with or without Brett Kavanaugh