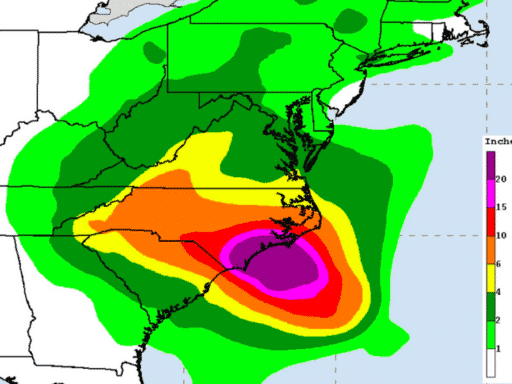 Warmer temperatures are increasing the energy and moisture available to hurricanes.

As the Carolinas and Virginia brace for Hurricane Florence’s assault later this week, one of the most menacing developments in the forecast is the rain.

As of Wednesday afternoon, the National Hurricane Center was warning of “life-threatening” rainfall. Coastal North Carolina, where 20 to 30 inches (and even 40 inches in some places) are expected to fall over several days, will be hardest hit; the storm could drop more than 10 trillion gallons on the region overall. While still far below the record-breaking 27 trillion gallons Hurricane Harvey dropped on Texas last year, that’s still a very dangerous amount, enough to produce “catastrophic flash flooding and significant river flooding.”

Any extreme weather event — whether it’s a hurricane, heavy rainstorm, drought, or tornado — is a collision of accidents in the atmosphere. But extreme precipitation like what’s forecasted for Florence is what scientists expect from hurricanes in a warming world — it’s one of the many types of worsening weather we are likely to face as we continue to pump greenhouse gases into the atmosphere. And these risks are compounded by the fact we’re still building so much in vulnerable areas. The future will bring worse weather, and more property for it to destroy.

Scientists are meanwhile swiftly getting better and better at teasing out just how much we can attribute in a specific rain event to human-induced climate change. In December, for instance, we learned from researchers at Lawrence Berkeley National Laboratory that the record rainfall from Hurricane Harvey was 38 percent higher than it would have been in a world that was not warming.

This kind of research is incredibly important because, as we’ve seen in the recent hurricane disasters, many coastal communities are woefully unprepared for these events when they arrive. If we’re going truly grapple with the risks of climate change and avert some of the escalating costs, we need to know what kind of extreme weather we’re going to be dealing with.

Last year, the overtopped dams, billowing sewage, and flooded homes in the wake of Hurricanes Harvey, Irma, and Maria showed that torrential rain can be devastating and fatal, especially in urban areas where concrete makes it harder for water to drain and where people can drown.

While we don’t yet know what exactly Florence will bring and how much of its severity to attribute to climate change, there’s good reason to be worried that Florence was made worse by human activity. Let’s break it down.

Why hurricanes under warmer conditions can dump so much rain

Downpours go hand-in-hand with hurricanes, since the cyclones are powered by evaporating and condensing moisture.

Warm ocean waters provide the fuel for hurricanes, and warm air causes the water to evaporate. This moisture-laden air then precipitates as rainfall during a hurricane, dissipating the heat energy from the water.

“Tropical cyclones are very, very good at converging a whole lot of heat in one place at one time,” James Kossin, an atmospheric scientist at the NOAA Center for Weather and Climate Prediction, told us in 2017.

Air can hold about 7 percent more water for every degree Celsius increase in temperature, Kossin explained.

That means warmer air and warmer water can lead to larger, more intense hurricanes, which in turn lead to more rainfall. (The Saffir-Simpson scale only accounts for windspeed, but precipitation is closely linked to a storm’s intensity.) Scientists are studying these links to understand how future storms will respond to these conditions.

“Hurricanes live and die by the amount of rainfall they make out of moisture,” said George Huffman, a research meteorologist at NASA Goddard Space Flight Center.

But where that water lands depends on the speed and the course of the storm, and not all areas are equally vulnerable.

“We know that in particular that [the regions around] Houston, Louisiana, and Florida are prone to some of the most extreme precipitation events in the United States,” said Sarah Kapnick, a researcher at NOAA’s Geophysical Fluid Dynamics Laboratory. “We do see signs of precipitation extremes increasing in these regions.”

It’s challenging to make direct comparisons between extreme rainfall events since their weather systems (e.g., hurricanes, thunderstorms) behave differently, so scientists draw on several benchmarks depending on the situation.

These include the peak rate of rainfall, total volume of rain, the three-day average rainfall, and the maximum depth of rainfall. And all of these are separate from flooding, which is governed by local geography and how people use land, in addition to the rates and total amounts of rain.

The climate signal in deluges like these is emerging

No single weather event — even an extreme one — can be “caused” by climate change, as Vox’s David Roberts has explained in detail. And when talking about current or very recent hurricanes, researchers are quite hesitant to even estimate how much climate change is to blame until they’ve run all the numbers, which can take months.

However, many scientists agree that rising average temperatures were definitely an important element of huge storms like Harvey, Irma, and Maria.

And as the chart below shows, the amount of rain from a once-in-every-30-years rainstorm has gone up due to warming:

As Vox’s Brian Resnick noted, a May study from the National Center for Atmospheric Research in the Journal of Climate simulated a what-if scenario on 22 recent hurricanes asking, what if these storms formed in a much warmer era, say at the end of the 21st century?

In the simulated model, the hurricanes didn’t grow that much more intense, but they almost all became rainier. On average, the model found rainfall increased 25 percent in all the storms — enough to make the difference between a bad flood and a catastrophe.

Right now, forecasters say that Hurricane Florence may slow down to a move at just 75 or 85 miles when it makes landfall toward the end of the week. That’s scary because it could exacerbate the risks of rain and inland flooding.

“When a storm stalls, that has more to do with the larger scale flow fields it’s sitting in,” said Kossin. “That’s just very, very bad luck.”

The only good news here is that forecasters are getting better at figuring out when the torrential downpours are coming — and estimating how bad they’ll be. That means that for communities in the Carolinas and Virginia in the path of the storm, there’s still some time to get out, and avoid the very worst consequences of the storm.

“This could be a massive disaster”: What happens if the coronavirus hits China’s internment camps?
The Democratic gun violence forum turned into a substantive clash over policy
Facebook took down a Trump post for the first time
America’s meat shortage is more serious than your missing hamburgers
The White House squashed a bipartisan Senate bill to stop election interference
Why does everyone but me have a sunburst mirror?