Why Indonesia’s tsunami was so deadly 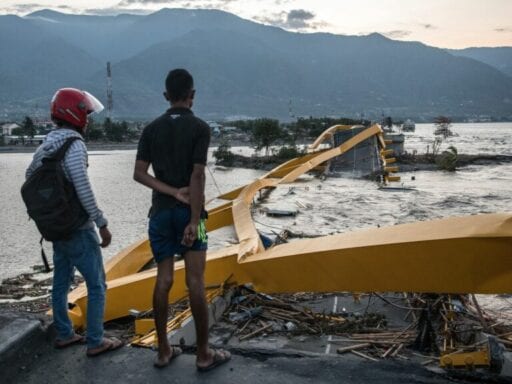 A massive 18-foot tsunami has killed more than 1,200 in Indonesia, and the toll may still rise.

A towering 18-foot tsunami washed over the Indonesian island of Sulawesi on Friday evening. The wave, and the enormous earthquake that caused it, killed 1,200 on the island that’s home to more than 17 million people. The wave demolished thousands of buildings and leaves behind a vast humanitarian disaster that will take weeks or months to resolve.

The massive wall of water was triggered by a magnitude 7.5 coastal earthquake in Sulawesi. Most of the deaths were reported in the city of Palu, but rescue workers haven’t been able to reach some parts of the island, so the toll may still rise higher.

Some of the dead were buried in mass graves over the weekend. More than 48,000 people were forced to flee their homes, and over 150 aftershocks have struck the region. Even though the water has receded, conditions on the ground are still treacherous.

A spokesperson for Indonesia’s National Agency for Disaster Countermeasure posted a video on Twitter depicting how rapidly the waves swept inland, forcing people to literally run out of the way.

Why this tsunami was so deadly

Earthquakes in the ocean can trigger tsunamis as vertical underwater movements shift columns of water, causing massive waves to propagate. These waves can travel upward of 500 miles per hour in the deep ocean. As they roar toward coastal waters, the waves slow down while getting taller. One common sign a tsunami is barreling toward a shoreline is the water receding abnormally far.

Part of what made Friday’s tsunami so devastating was how little warning there was. Locals reported that sirens didn’t go off. Text message alerts failed to send since cell towers collapsed during the earthquake. The country’s tsunami warning may have been lifted too soon before all the tsunami waves made landfall, the New York Times reports, lulling some locals into a false sense of security.

Indonesia has a tsunami early warning system with tidal gauges, accelerometers, and seismic broadband stations. But the system has suffered from a lack of maintenance, and according to the BBC, it underestimated the danger from Friday’s tsunami.

Another factor in the devastation is the geography of the region. Palu is about 50 miles south of the epicenter of the earthquake, nestled inside an elongated bay. The bay served to channel the massive tsunami toward the city, as you can see in this map:

The Donggala Regency, located near the mouth of the bay, was also hammered by the tsunami.

The country as a whole is one of the world’s most densely populated, and as an island nation, there’s little room to get out of the way of an incoming disaster. Officials have also struggled to enforce building codes that make buildings more resilient to

But the rumbling earth is a fact of life in Indonesia. The country is situated in the Ring of Fire, a 25,000-mile stretch around the Pacific Ocean that’s home to more than 90 percent of the world’s earthquakes and 75 percent of volcanoes. Back in 2004, the third-largest earthquake on record triggered waves up to 100 feet high, killing more than 230,000 people across 14 countries, with the bulk of the casualties in Indonesia. In the wake of the disaster, Indonesia launched a new disaster management agency to handle the logistics and coordinate relief efforts. That system is now being put to the test.

As with the 2004 disaster, the big danger now is the aftermath. With homes destroyed, electricity knocked out, and roads washed away, thousands are at risk of exposure. Power generators and relief supplies are being flown into the region as locals swarm airports trying to get out.