Why Iran is still attacking American troops during the pandemic 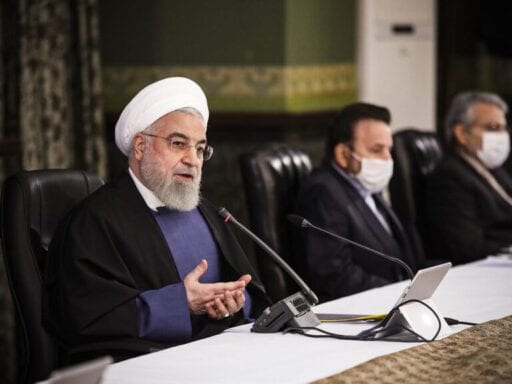 Iran is using the United States as a scapegoat amid the coronavirus pandemic.

Iran has been decimated by the spread of the novel coronavirus, with more than 83,000 diagnosed cases and 5,200 deaths as of April 20 — at least according to official figures, which are likely much lower than the real numbers. One official from the country’s medical council estimates that the total number of positive cases could be as high as half a million.

The country’s economy is in shambles, to the point that the Iranian government has chosen to resume what President Hassan Rouhani calls “low-risk business activities,” even as public health experts in the country warn of the consequences and urge Iranians to continue to stay at home. And the drastic drop in the price of crude oil will only serve to further weaken Iran’s already weakened economy.

But if you thought a deadly pandemic and staggering economic crisis would be enough to convince Iran to at least pause its efforts to confront the United States in the Middle East, you’d be wrong.

Despite the crippling toll of the pandemic, which has infected several high-ranking members of the regime as well as untold numbers of the Islamic Revolutionary Guards Corps (IRGC), Tehran has continued to work tirelessly to eject the last remaining US forces from Iraq and consolidate its influence over the Iraqi political establishment.

It’s largely doing so through the proxy militia groups it supports in Iraq, which in recent weeks have launched attacks targeting US forces and assets in that country, including one that killed two Americans on March 11. Last week, the IRGC resumed provocative actions in the Persian Gulf, harassing the US Navy there.

So why, in the midst of grappling with an out-of-control pandemic and an economy in free fall, would Tehran devote time and money to fighting the US? The answer, at least in part, is that the Iranian government believes the United States is particularly weak right now, too.

With Washington’s ineptitude on full display in its domestic response to the coronavirus, few people outside of a select group of Iran hawks — which includes Secretary of State Mike Pompeo — have much of an appetite for continued clashes with Iranian proxies in Iraq or incidents with the IRGC in the Persian Gulf right now.

The United States is also a convenient scapegoat and distraction that the Iranian regime regularly uses to deflect attention from its own failures.

Facing growing criticism at home and abroad for their abysmal response to the Covid-19 outbreak, Iranian leaders have tried to shift the blame to the US — particularly the stringent economic sanctions Washington has placed on the country, which Iranian leaders say (not entirely unfairly) are hampering the country’s ability to respond to the pandemic.

An Iranian disinformation campaign and a well-resourced propaganda effort have also spread the conspiracy theory that the US and Israel — typical Iranian foils — were responsible for starting the coronavirus pandemic. State media and social media accounts have also been creating and amplifying content in an effort to highlight the poor response to the disease and partisan infighting in the United States.

So while some observers may have expected Iran’s leaders to suspend some of their aggressive activities in order to devote their full attention to dealing with the coronavirus outbreak at home, the reality is the opposite: Iran is actually ramping up its fight against the US.

The US assassination of Qassem Soleimani on January 3, 2020, was intended to not only take Iran’s most capable military figure off the battlefield but also to “reestablish deterrence” — that is, to raise the stakes so that Iranian-backed militias in Iraq would think twice about attacking US forces in the country going forward.

However, a series of recent attacks shows that far from being cowed, these militias appear to have been emboldened. In all likelihood, Iran is only in the nascent stages of responding to the death of Soleimani.

In part, Iran and its proxies are carrying out the strategy they announced back in January. After an initial aggressive response in the form of missile attacks against two bases in Iraq housing US troops, Iran vowed to continue the fight until America was pushed out of Iraq. And it was clear that this mission would not be carried out directly and overtly by Tehran but, in classic Iranian form, via its proxies.

But Tehran could not have anticipated then that a global pandemic would provide the backdrop for these continued tensions with its adversary. And the public health crisis is increasing the sense of urgency surrounding Iran’s efforts in Iraq and accelerating its timelines.

The coronavirus pandemic sweeping throughout the world has led the United States to draw down its forces, repositioning soldiers within Iraq and consolidating troops to fewer bases. US special forces soldiers have been withdrawn from some of the world’s most dangerous active conflict zones, leaving local host-nation forces to contend with an array of well-equipped and battle-hardened terrorists, insurgents, and militias.

This has presented Iran with a unique opportunity to expand and consolidate its control in Iraq and push the US entirely out. And the country’s leaders aren’t going to squander their chance.

From Tehran, the United States looks at its weakest in years. The country is struggling to formulate a coherent and effective response to Covid-19. The divisions between the United States and its traditional allies are glaring. In terms of US-Iran tensions, US allies in Europe place much of the blame on America, not the Islamic Republic.

In the region, the US is being pressured, and at home, there’s a deep discontent with the status quo on both sides of the aisle. So, Tehran is resuming the actions that nearly brought the two countries to the brink of war throughout 2019, including proxy attacks in Iraq and on-again, off-again harassment in the Persian Gulf.

To remind America and its allies who’s winning in Syria, Iranian Foreign Minister Javad Zarif visited Damascus on Monday to meet with Assad. Zarif’s visit is both practical and symbolic, a means of face-to-face planning for what both countries see as the final phase of the Syrian conflict and as a photo opportunity to remind the world that the United States’ role in Syria has reached a nadir.

Washington will have little, if any, role in shaping the future of Syria while Tehran and Moscow divvy up the spoils, including access to strategically important bases.

Iran may pull back from other less important regional battlefields during the pandemic. But not Iraq.

Another consequence of the pandemic could very well be that Iran scales back its regional ambitions, at least for the immediate future, and channels its resources to focus on its immediate neighbors — Iraq and Afghanistan.

Prior to the Covid-19 outbreak, Iran would have viewed this as a downgrading of its regional standing, but now that America is drawing down in the region too, this may actually be a net positive for the Islamic Republic. After all, Iran has already effectively achieved its objectives in Syria and Yemen and no longer needs to maintain a robust presence in those countries.

In Syria, President Bashar al-Assad — a close Iranian ally — is now firmly in control of the country and no longer at risk of falling to pro-democracy rebels or Sunni Islamist militants (both outcomes Iran desperately wanted to avoid).

In Yemen, Iran’s regional rival Saudi Arabia and its allies have been bogged down by a group of rebels. Riyadh has suffered a blow to its reputation, as civilian casualties continue to mount in Yemen, putting Crown Prince Mohammed bin Salman and the Saudi leadership at odds with influential members of the US Congress.

A more targeted foreign policy could yield results for Iran, especially if the regime is able to stack a series of victories in quick succession. The crown jewels of this strategy include consolidating control over Shia foreign fighter militias in Syria and pushing the United States out of Iraq once and for all.

The visit of Soleimani’s successor, IRGC-Quds Force Commander Maj. Gen. Esmail Qaani, to Baghdad in late March was met with a statement from US President Donald Trump warning Iran not to move forward with what he labeled a planned “sneak attack” on US forces, suggesting “Iran will pay a very heavy price” if it chooses to do so.

But the United States would be wise to show constraint in its approach toward Iran. The Soleimani assassination backfired in the sense that it empowered anti-American elements within Iraq and helped elevate Iraqi politicians that are determined to concede to Iran’s wishes and hasten the withdrawal of American troops.

Of course, the United States shouldn’t just sit on its hands if Iranian attacks claim US lives, but any US response should be properly calibrated and proportional. Moving forward, the Trump administration should work to introduce potential off-ramps that allow the two countries to pause their conflict as they (and the rest of the international community) focus on addressing the global pandemic.

And once the US finally gets a handle on its own coronavirus outbreak, it should make a concerted effort to demonstrate goodwill toward Iran. Choosing this path is both the right thing to do and is in the US’s interest. This extends to rather simple steps like making it easier for Iran to acquire medical devices and medicine, including tests and masks.

This would go a long way toward debunking Iran’s propaganda, which claims the United States has sanctioned humanitarian goods, such as medical equipment and medicine (it hasn’t).

In the end, it could end up achieving much more than any drone strike is able to.

Colin P. Clarke is a senior research fellow at The Soufan Center and an assistant teaching professor at Carnegie Mellon University’s Institute for Politics & Strategy (IPS). Follow him on Twitter @ColinPClarke.

Ariane Tabatabai is the Middle East Fellow at the Alliance for Securing Democracy at the German Marshall Fund and adjunct senior research scholar at the Columbia University School of Public and International Affairs (SIPA). Follow her on Twitter @ArianeTabatabai.

How Covid-19 immunity testing can help people get back to work
Why the new coronavirus is so hard to cure
The political science of why Game of Thrones’ Daenerys may be a terrible queen
A radio ad invoked lynchings to court black voters. It did not go over well.
Not enough doctors know about this treatment for severe Covid-19 patients
“Reopening” isn’t enough to save bars and restaurants — the US needs a bailout