Why Iran won’t talk to Trump, explained in one paragraph 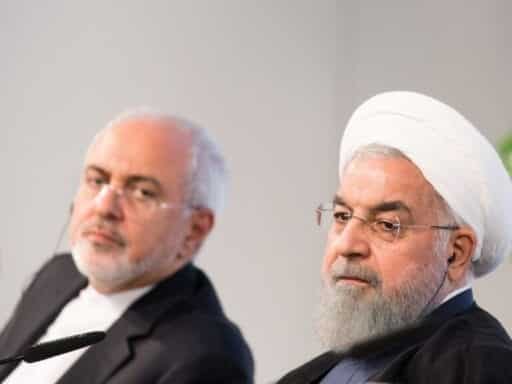 President Donald Trump is no friend of Iran.

He recently withdrew from the nuclear deal that former President Barack Obama had negotiated with the country. He’s reimposed heavy economic sanctions on Tehran. And just last month, he threatened the country on Twitter.

Despite this, the US president is still willing to meet with Iranian President Hassan Rouhani face to face, with no preconditions. “I’m ready to meet any time they want to,” Trump said during a press conference on July 30. “Speaking to other people, especially when you’re talking about potentials of war and death and famine … you meet.”

But if you thought Rouhani and other Iranian officials would jump at the chance, you’d be wrong. Iran quickly rejected Trump’s offer, saying the president had to first show respect to the country before a meeting could ever happen.

Vali Nasr, writing for the Atlantic on Wednesday, neatly summed up why this is the case. (Spoiler alert: It has to do with domestic Iranian politics.)

The problem facing Iran is not that talking to Trump is futile, but that selling the idea at home is difficult. In Tehran, rival factions openly jockey for power and influence. The nuclear deal was a victory for moderates; its demise has favored conservative hardliners. Iran’s rulers cannot afford to enter talks looking like they were duped by America in the first nuclear deal, and then were bullied into negotiating for a second one. Rouhani’s conservative rivals made that point clear, quickly rejecting Trump’s offer. Meanwhile, Iran’s moderates, conservatives, clerics, and security chiefs fear a comeback by Iran’s former populist and anti-clerical president Mahmoud Ahmadinejad, whose urban and poor base has taken to the streets in recent months.

Let’s break that down.

Iran’s president, Rouhani, is considered somewhat moderate for Iranian politics. He staked his political reputation on signing the Iran nuclear deal and improving Tehran’s economy by doing so. (The deal basically allowed the US, Russia, China, and European countries to lift financial penalties on Iran in exchange for caps on the country’s nuclear program.)

But Trump pulled out of the deal in May, and officially reimposed those sanctions on Tuesday. In response, the Iranian economy has already started to sink, and with it, Rouhani’s reputation.

There are two reasons why. First, hardliners in Iran are now gaining power at Rouhani’s expense, since Trump’s withdrawal from the deal helps shore up the argument that Washington can’t be trusted, and gives them a good reason not to trust the US to negotiate any new deals in the future.

Rouhani is also fending off a popular revolt. Hundreds of Iranian citizens have taken to the streets in more than 80 cities — including Tehran — to protest the country’s struggling economy and the ruling regime. This could also potentially lead to the return of Mahmoud Ahmadinejad, a brutal, anti-US populist leader who served as Iran’s president from 2005 to 2013. On Thursday, perhaps in an effort to regain control, he called on Rouhani to step down: “Your continued presence is at the expense of the country.”

No Iranian moderate or hardliner wants to see Ahmadinejad lead again; one unnamed conservative once called him “the ally of the Satan.” There are many reasons why, but the main one is that Ahmadinejad effectively ruined Iran’s regional and global standing while he was president. And should he lead again, there’s little to no chance Iran would sit down with the US in the near future.

So Rouhani, it seems, is stuck between a rock and a hard place. And with all the domestic pressure he’s under, it’s no wonder he’s refused a meeting with Trump. It’s possible Rouhani will change his mind — but things need to change in Iran first.

The first 6.4 million doses will be a crucial test of Covid-19 vaccination logistics
Tropical storm Laura’s flooding and other impacts on the ground: What we know
“We can’t let things settle down”: George Floyd and Eric Garner’s families call for racial justice a...
My husband was a veteran living in shame. He died from an opioid addiction.
Trump demands Obama be made to testify in the Senate
Trump says he will fill Ginsburg’s seat “without delay”