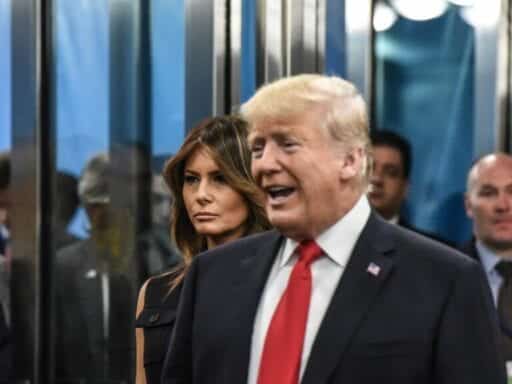 Typically, a powerful man’s public image requires the support of a wife. Trump is different.

There’s a script in American politics for the wife of a powerful man.

If he’s accused of infidelity or sexual misconduct, she stands beside him at the press conference, looking somber but supportive. When it’s her turn to speak, she talks about what a wonderful husband he is, what a loving father — he would never do something like this. The message is simple: If his wife is sticking with him, the country should too.

Now, in an interview with ABC’s Tom Llamas, Melania has addressed the infidelity allegations directly. But instead of gushing about what a great husband the president is, she merely said she has more important things to think about. It’s of a piece with her entire approach to supporting her husband publicly: Do the absolute minimum.

Of course, she hasn’t gone so far as to support the women who have accused her husband — or newly confirmed Supreme Court Justice Brett Kavanaugh — of sexual misconduct. In the same interview with Llamas, she said that women who come forward as part of #MeToo need “really hard evidence” and that “you cannot just say to somebody, ‘I was sexually assaulted’ or ‘You did that to me.’”

Her reticence does say something, though, about President Trump’s public image. Traditionally, the wives of powerful men have acted to soften and humanize their husbands, to counteract allegations of sexual misconduct, infidelity, or other behavior that might give voters pause.

Trump, however, may not need softening. He’s popular, in part, because he’s a bully who frequently makes sexist and racist comments, who thinks nothing of mocking a woman who says she was sexually assaulted. Maybe Trump doesn’t need his wife to talk about what a great guy he is, because his supporters like that he isn’t a great guy.

What’s more, Trump has never been vulnerable to scandal in the same way other public figures have. In some ways, reactions to the Access Hollywood tape, which caught him bragging about his ability to grab women “by the pussy,” set the stage for everything that followed — it seems that no matter what he says or does, Republican leaders will complain briefly, then fall in line. And the standards for his behavior are so low that no revelation about him can really surprise Americans very much.

Melania Trump’s unwillingness to pull out all the stops to defend her husband may say something about her — she’s certainly never embraced the spotlight as first lady. But it says something about him, too. For some of his supporters, his treatment of women isn’t a bug; it’s a feature.

“I have much more important things to think about”

After months of headlines about Daniels, McDougal, and the payoffs intended to keep them quiet, Melania is finally speaking publicly about allegations that her husband has been unfaithful. And here’s what she’s saying: “It is not a concern and focus of mine. I’m a mother and a first lady, and I have much more important things to think about and to do.” Note that she doesn’t include “wife” as one of her roles.

“I’m a mother and a first lady, and I have much more important things to think about and to do,” she tells @ABC. https://t.co/VILtmVBA2E pic.twitter.com/MSLsRksVu8

Asked if she loves her husband, Trump offered this ringing endorsement: “Yes, we are fine.”

Contrast that with the comments Ashley Estes Kavanaugh made about her husband, now a Supreme Court justice, in a Fox News interview after he was accused of sexual assault: “He’s decent, he’s kind, he’s good,” she said. “I know his heart.”

She was following a pattern laid down by the wives of public figures before her, including Virginia Thomas, wife of Justice Clarence Thomas, who wrote a 1991 People magazine cover story about how prayer had helped her and her husband “survive” the sexual harassment allegations against him. Thomas also wrote that her husband had encouraged her to speak up about her own experience with sexual harassment: “He gave me the courage to go forward.”

Hillary Clinton became part of the same pattern when, in 1992, she sat down with her husband for a 60 Minutes interview to address the claim that he’d had an affair with Gennifer Flowers. “I’m not sitting here, some little woman standing by my man like Tammy Wynette,” she famously said. “I’m sitting here because I love him, and I respect him, and I honor what he’s been through and what we’ve been through together. And you know, if that’s not enough for people, then heck — don’t vote for him.”

It was enough, and people did vote for him. As Michael Kruse points out at Politico, “What she did on 60 Minutes saved his candidacy and his political career. Most agree he would not have become president without it.”

Melania Trump has defended her husband in the past, as when she dismissed his comments on the Access Hollywood tape as “boy talk.” But in general, she’s eschewed the kind of joint interviews the Clintons and Kavanaughs gave. In public appearances, she’s sometimes seemed indifferent or actively hostile to her husband. Her tendency to stay out of the spotlight has inspired numerous conspiracy theories about her whereabouts.

Some of this likely has to do with Melania’s personality — she reportedly never wanted to be first lady. Some of it may have to do with the Trumps’ relationship, which, as Vox’s Emily Stewart noted, is said to be “less than warm at times.” But some of it almost certainly has to do with President Trump himself.

Trump doesn’t need softening, because his supporters like that he’s a jerk

For a political figure who’s accused of wrongdoing, the point of a supportive wife is to show voters that he’s a nice guy. If his wife still likes him, you can like him too! As Stan Greenberg, a pollster for Clinton’s 1992 campaign, told Gwen Ifill of the New York Times after the 60 Minutes interview aired, “Their family is on display, and one thing is very clear: Voters think they have a real marriage and that he is committed to her.”

“The major role and responsibility of the spouse of the candidate is to be the window to the world about that person’s character,” Paul Costello, communications director for Mayor Sharon Pratt Kelly of Washington, told Ifill. “They say, ‘I love this person. I trust this person. I am this person’s most intimate partner, and if you believe me, you can believe them.’”

President Trump may not need his wife by his side convincing voters he’s a good guy — many of them don’t think he’s a good guy, and they cast their ballots for him anyway. In fact, some people may like him because they think he’s not a good guy.

While past public appearances by wives of public figures may have been calibrated to make the men seem caring and approachable, Trump gets mileage out of the perception that he doesn’t care what people think. Earlier this year, Stan Greenberg, the same pollster who talked about the Clintons’ 60 Minutes interview, talked to Trump voters in Macomb County, Michigan. “People like that he is ‘no-nonsense’ and ‘doesn’t sugarcoat’ and they respect his ‘bravado against competition,’” he and Nancy Zdunkewicz of Democracy Corps wrote in a memo about their research.

As James Hohmann noted at the Washington Post in May, many Trump voters support the president because they feel attacked in some way by Democrats. He cites a Michigan Trump voter quoted in The Great Revolt, by Brad Todd and Salena Zito: “We voted for President Obama and still we are ridiculed. Still we are considered racists.”

The same dynamic may apply to sexism: Tired of feeling like their beliefs about gender roles or abortion rights are labeled by the left as sexist or anti-feminist, some Trump supporters may have flocked to the president, who unabashedly mocks women any chance he gets and rarely apologizes for it.

Even Trump’s critics on the right sometimes find they can get behind him when it comes to women coming forward about sexual misconduct. “Trump has not backed down in the face of the slipperiness, hypocrisy and dangerous standard-setting deployed by opponents of Brett Kavanaugh’s nomination to the Supreme Court,” New York Times op-ed columnist Bret Stephens wrote earlier this month. “I’m grateful because ferocious and even crass obstinacy has its uses in life, and never more so than in the face of sly moral bullying.”

Stephens stopped short of praising Trump for mocking Christine Ford (he called the president’s comments “ugly and gratuitous”), but he did appreciate Trump’s willingness to face off against Democrats and the supposed scourge of false rape accusations: “I’ll admit to feeling grateful that, in Trump, at least one big bully was willing to stand up to others.”

For many who support Trump, and even some who generally oppose him, his bullying isn’t a problem — it’s the whole point. This has the effect of freeing Melania Trump up to tour Kenya in a pith helmet without having to praise her husband in much detail.

In some ways, it’s a relief that the first lady is rarely called upon to perform the thankless task of trying to convince the country that her husband respects women. But it’s also a sign of something darker: Plenty of Americans know the president doesn’t respect women, and a lot of them don’t care. They may even like it.

26 feet of water: What the worst-case hurricane scenario looks like for Tampa Bay
Why James Mattis couldn’t contain Trump
75 books from university presses that will help you understand the world
Buffy the Vampire Slayer is getting a reboot with a black woman in the lead
Black bodies are still treated as expendable
Iowa Rep. Steve King says America is heading toward another civil war