Why “Missing U,” Robyn’s first new solo music in 8 years, is a gift to her fans 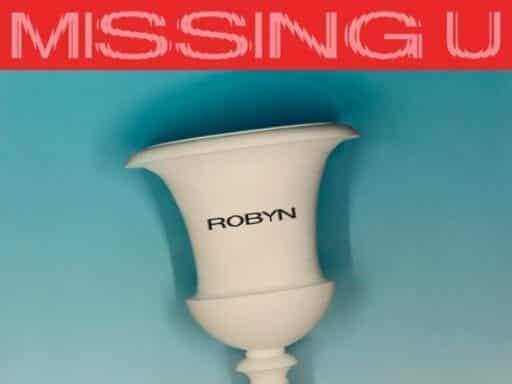 Call your girlfriend, who will be dancing on her own to “Missing U.”

For the last decade or so, being a fan of Robyn — the effervescent Swedish singer-songwriter responsible for modern dance classics like “Call Your Girlfriend” and “Dancing on My Own” — has been an exercise in feast and famine. Now, after a too-long hiatus, Robyn is giving fans a taste of what they’ve been missing.

After literal years of teasing a new record, Robyn has unveiled the first concrete sign that her full-length follow-up to 2010’s three-album album series Body Talk is on the horizon: a single, titled “Missing U,” which the singer released on Wednesday, August 1 following a week of buildup.

“Missing U” trades heavily in the strain of triumphant melancholy — or perhaps melancholic triumph — that characterizes some of Robyn’s most beloved hits, like “Call Your Girlfriend” and “Dancing on My Own.” The new song embodies the sense of catharsis and resilience that’s become a big part of Robyn’s sonic brand, which has endeared her to a fan base — a good portion of them queer or otherwise outside the pop mainstream — that knows and cherishes the kind of visceral emotional release that can happen in the middle of a packed dance floor.

The song’s lyrics may address an unnamed absent lover, but for fans fluent in Robyn’s favorite lyrical motifs, “this empty space you left behind” translates to the two-way void that’s opened up between the singer and her fans since Body Talk catapulted her into the broader cultural consciousness. Fans have missed Robyn, yes, but in choosing “Missing U” as her first solo single in over half a decade, and explicitly dedicating it to her fans, Robyn has made it clear that the feeling is mutual.

That idea of mutual respect between artist and fan is not unusual in pop music, where “doing it for the fans” is one of the most enduring clichés outside of doing it for Mama and/or God. But in the case of Robyn and “Missing U,” it feels not only true, but also sort of profound, a statement on the enduring strength of a symbiotic relationship built on a shared recognition of the power in dancing your way through pain, pleasure, and everything in between.

“Missing U” may not be about Robyn’s fans, but it is expressly for them

Robyn’s popularity and attendant fandom exploded back in 2010, when she released three career-defining albums back to back: The Body Talk series, comprising two “mini-albums,” subtitled Pt. 1 and Pt. 2, and one longer album, called simply Body Talk, that compiled songs from parts one and two alongside five new tracks. Altogether, the Body Talk era was responsible for around two dozen excellent, critically acclaimed dance songs, which became the crown jewels of a discography that also includes earlier hits like 2007’s “Handle Me” and her 1997 Total Request Live-era breakthrough “Show Me Love.”

The two years following the release of Body Talk were the era of Peak Robyn, full of high-profile TV appearances, Grammy nominations, festival and tour performances, and one classic music video, for “Call Your Girlfriend,” that achieved mini-meme status for Robyn’s one-of-a-kind dance moves.

Then, Robyn kind of disappeared.

Well, not entirely: there was a 2014 collaborative five-track EP with electronic duo Röyksopp, a smattering of one-off tracks, and a handful of live appearances. But mostly, there was the promise of a proper Body Talk follow-up that never quite materialized amid the smaller-scale side projects, leaving fans to subsist on her existing body of work as they waited out the Great Robyn Famine.

One group of those fans, based in Brooklyn, became instrumental in keeping the spirit of Robyn fandom alive via This Party Is Killing You, a recurring Robyn-themed dance party in Williamsburg that’s been enduringly popular in the years since its post-Body Talk genesis. (The party takes its name from a repeated lyric in the Body Talk Pr. 1 track “Don’t Fucking Tell Me What To Do.”) So it’s entirely appropriate that This Party Is Killing You would serve as the setting for Robyn’s re-entry into her fans’ lives and speakers.

In the lead-up to the release of “Missing U,” Robyn previewed the track via a short film released on Monday, July 30, designed to both tease the single and celebrate the devoted fans who have been waiting for this moment for years.

The seven-and-a-half-minute clip — subtitled “A Message to My Fans” — briefly tracks the history of This Party Is Killing You via its creators and attendees, who team up to send Robyn a series of voicemails urging her attend “the Robyn party” and sharing what she and her music has meant to them. It then switches to Robyn listening to the voicemails and talking a little about her struggle to follow up Body Talk (and performing a version of the backwards somersault she does in the “Call Your Girlfriend” video).

The clip reaches its climax as it follows the singer to make a surprise appearance at what appears to be the May 2018 party, where she DJed and performed another recently teased single, “Honey,” which briefly appeared in the final season of HBO’s Girls.

But “Honey” didn’t end up being Robyn’s comeback single. It’s “Missing U” that plays throughout the clip, an appropriate soundtrack to this reminder that for her fans, Robyn and her music have never gone away — they’ve only grown more resonant to a generation of devotees whom she’s helped find themselves, both on and off the dance floor.