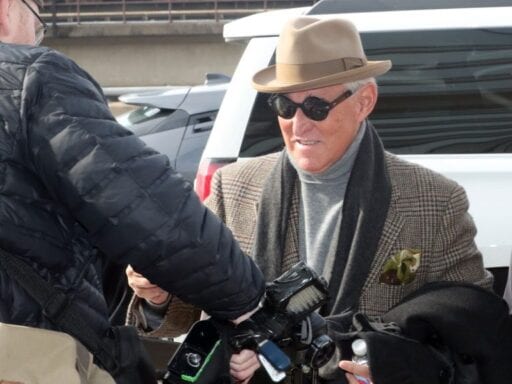 Stone is disputing this and asking for a different judge.

Roger Stone has asked for his case to be transferred to a different federal judge — and what seems like a minor procedural move could have intriguing implications for special counsel Robert Mueller’s investigation as a whole.

Currently, Stone’s indictment for obstruction, false statements, and witness tampering is before Judge Amy Berman Jackson in the District of Columbia. But the case wasn’t assigned to her at random. It was given to her because Mueller designated it “related” to another case Jackson was already overseeing.

That “related case” was US v. Netyksho et al. — Mueller’s indictment of 12 Russian intelligence officers for hacking Democrats’ emails during the 2016 campaign, and leaking them so they could be posted by WikiLeaks.

Mueller’s team said this case is related to Stone’s for two reasons: first, that certain “stolen documents” are a topic in both cases, and second, that warrants used in the Russian hacker case surfaced “certain evidence that is relevant” to Stone’s case.

“Several” search warrants in the hacker case “were executed on accounts that contained Stone’s communications with Guccifer 2.0 and with Organization 1” (WikiLeaks), Mueller’s team wrote in a filing Friday. The special counsel added that Stone’s alleged false statements “did not arise in a vacuum,” but rather were made in “the course of an investigation into possible links” between Russian hackers, WikiLeaks, and US persons (including Stone himself).

Stone’s lawyers, however, objected to the related case designation in a filing last week, claiming the cases didn’t seem particularly related and asking to be randomly assigned a judge.

The judge in question, Amy Berman Jackson, also happens to be overseeing the DC case of Stone’s longtime friend and former business partner Paul Manafort. In fact, she’s the judge who ordered Manafort sent to jail last June (after finding that he’d violated his conditions of release), and who concluded this week that Manafort lied after committing to cooperate.

But all this is intriguing because the central question at the heart of the Mueller investigation is whether the Trump campaign colluded or conspired with Russian government actors to interfere with the election. And the most high-profile way Russia interfered was with those email hacks and leaks.

No Trump associate has yet been charged with conspiring with Russia or criminal involvement in the email leaks. But there’s been much speculation that such charges could be coming. And now, Mueller’s team is on the record saying they found “relevant” evidence about Stone during their Russian hacker investigation. So the question of just how connected these cases are could be important.

Amy Berman Jackson has overseen a lot of Mueller cases

Mueller’s grand jury is in Washington, DC, and accordingly, most of his indictments and plea deals so far have been filed there and assigned to judges on the US District Court for the District of Columbia.

Usually, when a new case is filed, it’s assigned at random to a judge on the court. And several different DC District Court judges have drawn Mueller cases so far.

But one judge in particular, Amy Berman Jackson — an Obama appointee confirmed to the court in 2011 — had a lucky draw.

First, she was assigned Mueller’s initial indictment of Paul Manafort and Rick Gates in October 2017. With that case, eventually, came several more — Alex van der Zwaan’s guilty plea, Gates’s plea deal, Konstantin Kilimnik’s indictment, and Sam Patten’s plea deal were all filed and assigned to her, since they all related to Manafort’s case.

Then, last July, Jackson was coincidentally assigned Mueller’s indictment of 12 Russian intelligence officers for crimes related to the hacking and leaking of Democrats’ emails. (Special counsel’s office spokesperson Peter Carr confirmed to me that this case was randomly assigned to Jackson, not designated as related to Manafort’s case.)

When the special counsel’s team filed Stone’s indictment in January, the group also filed a court form designating it as a related case — making sure it would be assigned to Jackson.

On the form, Mueller officials checked two boxes about how Stone’s case was related to the hacker case — because it had a “common search warrant” and because there were “activities which are a part of the same alleged criminal event or transaction.” They also added a note explaining their reasoning at more length.

Now, perhaps the “related case” designation is a simple legal formality that Mueller was required to do. The DC federal district court’s local rules state that cases “are deemed related” when there’s, for instance, a common search warrant.

But there are some potential strategic reasons Mueller might be happy to have the Stone case before Judge Jackson in particular.

As mentioned, she’s already handled several Mueller cases, and has generally been viewed as professional and fair. She also oversaw months of pretrial wrangling for Manafort’s case (before he struck a plea deal), handing down rulings on topics such as whether Mueller had the authority to indict Manafort — topics that will likely come up again with regards to Stone.

Finally, there’s the possibility that more charges will be filed against Stone — and that those charges will be more directly connected to the Russian hacker charges. Mueller may not be ready for that yet or even sure about whether that will happen, but if it were to happen, he’s already gotten both cases before the same judge (the judge who is coincidentally also handling Manafort’s case).

What Stone is arguing

But Roger Stone’s attorneys filed a motion last week objecting to the “related case” designation, and requesting reassignment to a different judge.

The defense’s argument is essentially that the cases don’t really seem related. “At first blush and without the benefit of discovery, there is nothing about these cases that suggests they are suitably related,” Stone’s team writes. “These two cases are not likely to arise from a common wiretap, search warrant, or activities that are part of the same alleged criminal event or transaction.”

The problem with that, of course, is that Mueller says there is a common search warrant. In fairness, Stone’s team may not have this documentation yet, so it’s difficult for them to address that directly. But unless Mueller is misleading about this, the “related case” designation would seem to be appropriate.

Yet Stone’s true purpose in filing this motion may well be to try and quickly surface evidence Mueller has on him and others. Independent journalist Marcy Wheeler makes this case at her site EmptyWheel, theorizing that Stone is “trying to figure out what kind of evidence Mueller has to indict WikiLeaks” and “whether Mueller has the goods to name him as a co-conspirator.”

Mueller has now filed that response, and revealed that he executed search warrants on “accounts that contained Stone’s communications with Guccifer 2.0 and with Organization 1.” Those warrants, the special counsel said, “are being produced to the defendant in discovery in this case” — and he promised to discuss them in more detail in a sealed addendum to the filing.

For more on the Mueller probe, follow Andrew Prokop on Twitter and check out Vox’s guide to the Trump-Russia investigation.

Paper napkins are expensive and environmentally unsound. Now the industry is trying to save itself.
Kristen Welker is moderating the final presidential debate. Trump is already attacking her.
What is Signal, and why is everybody downloading it right now?
The neoconservative fantasy at the center of the Suleimani killing
Morning Brew, the business newsletter publisher for millennials, is in talks to sell itself to Busin...
How WandaVision is setting up Monica Rambeau’s superpowers